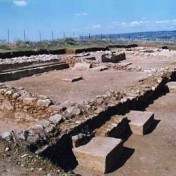 Archaeology in 2011 Macedonia and Thrace: great discoveries and financial strain

2011 and the beginning of 2011 are characterized by a general lack in financial resources which leads to the general poverty in archaeological activity. However,  a series of great discoveries that took place in 2010 is expected to highlight the official meeting for the Presentation of the Archaeological Activity in Macedonia and Thrace (10-12 March). Among them the work of C. Sismanides in Calindoia, which brought to light two Roman statue heads ( one thought to be of Augustus) and the search for the palace where Roxanne, wife to Alexander the Great, spend the last days of her life, in Casta, Amphipolis.