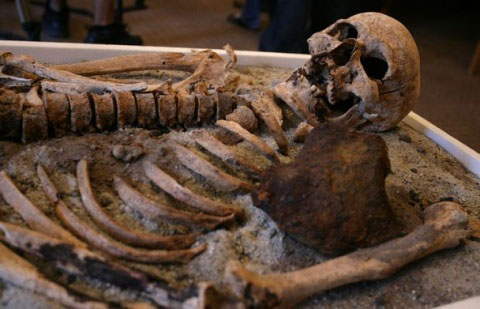 Krivich (The Crooked), the legendary pirate

The National Geographic Channel is airing Sunday evening a film dedicated to archaeology excavations in the Bulgarian Black Sea town of Sozopol, focusing on the “vampire” skeleton. (The film will be shown at 9 pm.)

The skeleton was the one of a man with an iron stick in his chest. He was buried over 700 years ago and was stabbed multiple times in the chest and the stomach, as his contemporaries feared that he would rise from the dead as a vampire.

The viewers will learn about the discovery and what historians, archaeologists, and anthropologists say about this practice on Bulgarian lands, and the connection between the “vampires” and count Dracula.

After the discovery, media in the US, Europe and Asia all broke the news in the press and in online editions.

The story found its place in two articles of the most-read tabloid in the world – The Daily Mail, in the Washington Post, BBC, and a number of Russian media.

Meanwhile, Bulgarian tour operators reported that the interest has been huge and Germans and Brits have inquired about “vampire vacations” in Sozopol.

National History Museum Director Bozhidar Dimitrov explained the vampire’s name was Krivich (The Crooked) and he was a legendary pirate, manager of the Sozopol fortress or one of his heirs.

The Crooked, as his contemporaries called him, has been a crippled, but extremely intelligent man. He outshined everyone with his knowledge about the sea, the stars and herbs. Byzantine chronicles describe how he plundered a Venetian ship. It is possible that he was declared a master of the witchcraft because of these talents, which explains the metal stake through his heart.

Experts also believe that the man may have been an intellectual and perhaps a medic, as such individuals often raised suspicions in the Middle Ages. The grave was discovered near the apse of a church, which suggests that he was an aristocrat.

According to archaeologists, this is the first time a “vampire” burial has been discovered in Sozopol.

Over 100 buried people whose corpses were stabbed to prevent them from becoming vampires have been discovered across Bulgaria over the years, according to Dimitrov.