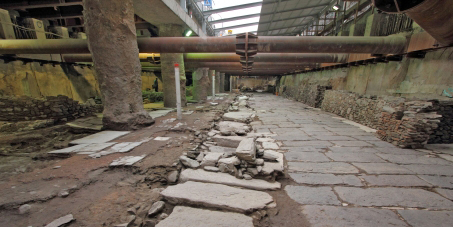 Breaking the heart of Thessaloniki through time?

Save city’s byzantine center, the city’s memory and identity!

Following the decision of the Greek Ministry of Education and Religious Affairs, Culture and Sports about detaching and moving the antiquities found during the metro construction works in Thessaloniki to the Pavlos Melas camp, as well as yesterday’s statement of the Attico Metro S.A. that there was no technical solution to preserve them in situ, an online petition has started. The full text of the petition reads:

“Recent rescue excavations contacting by the Greek Archaeological Service at the historical center of Thessaloniki, Northern Greece, due to the construction of modern city’s Metro Station (Venizelou str.), revealed one of the most significant material evidence of city’s urban life at 6th–9th century: the monumental Gate (Tetrapylon) placed at the crossroad of the central avenue (decumanus) with the road leading to the harbor. The central road (ca. 76 m in length) was paved with marble plaques, and framed by public buildings. These extraordinary finds signify the city’s early urban development and constitute a unique monumental evidence of social, commercial, administrative and every day life in early byzantine Thessaloniki.

The decision, made up by the State, of removing the whole monumental complex and placing it in a far distant ex-army camp undermines the essence of the un-movable archaeological monument according to the Greek and International Law. Thus, this rare piece of world heritage will loose its original place and context and far more its exceptional archaeological/historical character.

Consider what will be the Eifel Tower or the Big Ben removed from their original place? The citizens of Thessaloniki, as well as the citizens all over the World have the right to stay attached with this monument and stay connected with their heritage, memory and identity through time.

Please sign up and vote in order to save this irreplaceable monument. There are technical solutions to preserve it and place it straight to heart of Thessaloniki’s modern life.”