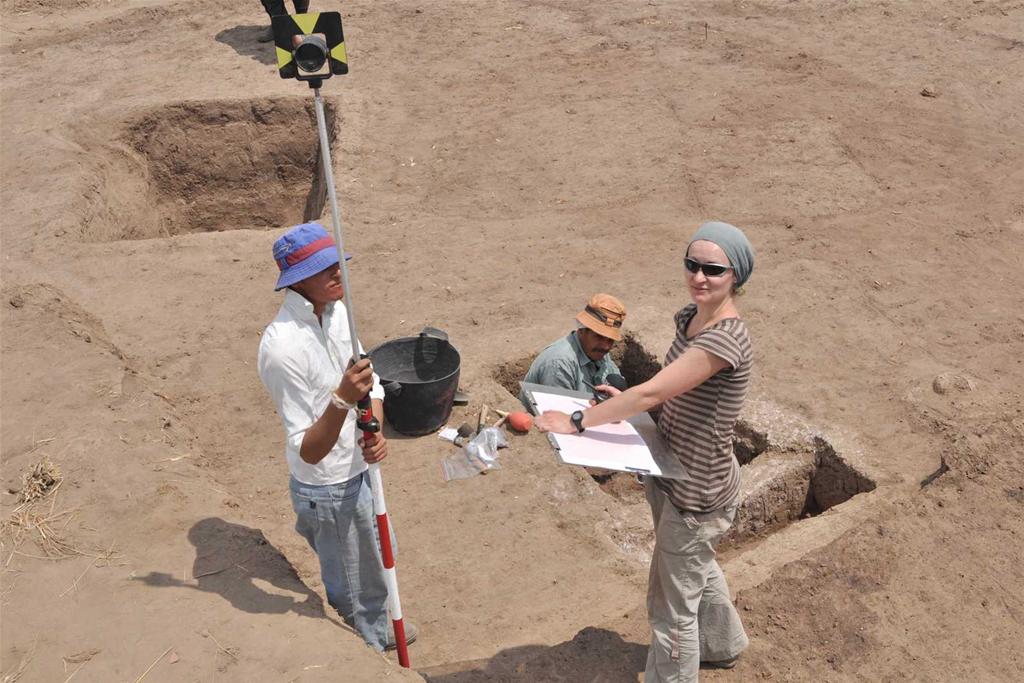 By a Polish team

Remains of a settlement from the period of the great pyramid builders (Dynasty III-VI) have been uncovered at Tell el-Murra in the Nile Delta by Polish archaeologists from the Institute of Archaeology of the Jagiellonian University.

The team has been working at Tell el-Murra since 2008. The settlement is located in the north-eastern part of the Nile Delta, in the vicinity of another site from the same period,Tell el-Farkha, studied also by Polish archaeologists from Poznań and Kraków.

Tell el-Murra is a small hill, covering the remains of an ancient settlement, founded more than 5500 years ago. Here, the construction of buildings made of dried bricks on the same site went on for 1,300 years, forming an elevation (tell), which now reaches a few meters above the level of fields.

Excavations at Tell el-Murra in April and May 2013 were conducted mainly in the north-eastern part of the site, occupied by the settlement. The objective was to confirm the hypothesis based on earlier work, relating to the period in which the settlement had been inhabited.

“This year’s work allowed us to determine that the studied part of the settlement was inhabited during the Old Kingdom (III – VI Dynasty), and in times when the great pyramids were built at the Memphite necropolis the located in the area of today’s Cairo” – explained the research leader, Dr. Mariusz Jucha.

During excavations, archaeologists uncovered the remains of a residential complex and utility buildings. Particularly interesting, according to archaeologists, is a large number of circular plan structures identified with silos for grain storage. The largest, made from dried bricks, had about 3.5 m in diameter. In the vicinity, buildings with rectangular rooms have also been uncovered.

“It is still unclear why the residents of Tell el-Murra left this place at the end of the Old Kingdom period. Why the settlement, which, according to the results obtained in previous seasons of excavations, dates back to around 3500 BC, was abandoned after almost 1300 years of existence?” – wonders Dr. Jucha.

Buildings erected at the end of the existence of the settlement at Tell el-Murra are much more modest compared with older structures. The area occupied by the village was also much smaller at the time.

“It seems that the first signs of the crisis, the causes of which have been difficult to determine so far, probably came much earlier, namely in the Early Dynastic Period (Dynasty I-II)” – said the research leader.

For unknown reasons, the area of the settlement decreased. Probably then its south-western part was abandoned, and the area became the place of burial. Those residents who remained in the settlement were building their homes only in the northern and eastern part of the site.

Archaeologists will try to clarify these issues. The most important task for the coming seasons is tp study the remains of the settlement preceding period of the Old Kingdom, which are below the buildings studied this year.

Polish researchers continued the study within the cemetery adjacent to the settlement. They discovered burials of the Early Dynastic Period. Of particular note, according to the research leader, is the unusual burial in a ceramic coffin, similar to those found at Tell el-Murra in previous years.

“The use of ceramic coffins was not common practice at other sites in the Delta. Their presence at Tell el-Murra indicates the existence of differences even between nearby settlements, while raises questions about the reasons for the observed differences” – said Dr. Mariusz Jucha.