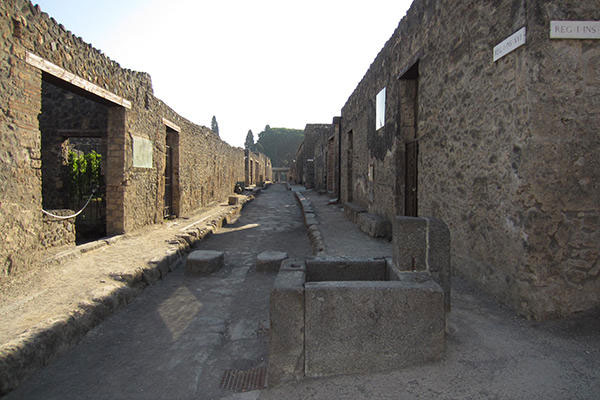 New survey focuses on the life of Pompeii's slaves

Her name and footprint are embedded in a terracotta tile of an ancient Roman temple. Amica was her name. She was a Roman slave. For the most part, the slaves of the well-preserved city of Pompeii still remain largely “invisible” in history, according to the University of Delaware’s Lauren Hackworth Petersen, which is why the signed tile is a rare find.

Petersen has been a professor at UD since 2000. She specializes in ancient Roman art and architecture and has also done extensive research in Greek and Etruscan art and assisted with the excavations at the Etruscan/Roman habitation site at Cetamura del Chianti, Italy. Now, she is exploring new approaches, to shed light to the live of Pompeii’s slaves. In order to do so she uses literature, law, art and other material evidence.

As Petersen said during the inaugural lecture of the UD Department of History’s Graduate Student Lecture Series on September 11, she spent countless hours in Pompeii walking on the stone streets and narrow sidewalks “in the scorching sun of summer, in the rain and howling wind of winter,” imagining where the city’s slaves may have traveled as they carried out their daily work.

Who were these slaves? Roman slaveholders got them from many places. Some were Greeks, some were Africans, some were bred in the country specifically for the role, according to Petersen.

When Mt. Vesuvius buried Pompeii in 79 A.D. in a searing avalanche of hot air, volcanic ash and rock, the city had a population of 20,000 people. Although no one knows exactly how many slaves were in the city, the typical Roman household may have had 5-7 slaves, Petersen said, with larger houses such as the impressive House of the Menander, nearly the size of a city block, having many more.

Using a map of Pompeii showing detailed plots of the ancient streets and structures, Petersen pointed out the main doors to houses, which would have been the focus of doorwatchers inside, and the side doors and other “spaces of backdoor culture” through which a household’s slaves most likely passed.

Slaves might snatch precious time out of their owner’s (and various slave supervisors’) sight fetching water at a public fountain, slipping into a tavern, bakery or cookshop, resting on a masonry bench in the shade of a house a few streets away, lingering in a garden on the south side of the city. In doing so, “a slave could become more anonymous and invisible on highly frequented streets,” Petersen said.

Those narrow, two-way stone streets would have been noisy and odoriferous, filled with donkey carts, human sewage and animal feces, with slaves carrying the wealthy elite above the mob on litters.

Surprisingly, Petersen said, slaves were not immediately identifiable by their dress. The simple tunic was the clothing of choice worn by slaves and their owners alike. Only the toga was reserved for Roman citizens; however, many did not wear it, Petersen said, because the long length of material was cumbersome and difficult to keep clean.

Urine, used as a cleansing agent due to its high ammonia content, was collected in jars and taken to the fulleries where clothing was laundered. Slaves working in the fulleries would stand in small tubs filled with urine, water and dirty clothes stomping on them to clean the cloth.

Where slaves are more visible in Roman history is in literature and the law, Petersen said, because slaves were viewed as property, and if they were damaged by an erratic donkey cart or a falling pot flung from an upstairs window, for example, financial retribution would need to be made by the perpetrator.

Although some slaves escaped, extensive means of recovering fugitives led to the recapture of many. Petersen said the gruesome remains of a slave shackled in irons, unable to flee Mt. Vesuvius’ eruption, were found in a slave prison when the city was excavated centuries later.

Petersen calls the reconstructive work at Pompeii a starting point for thinking of places in context. “We are learning to see what we have been trained to unsee,” Petersen said. “We are looking at the world through a slave’s eyes and not only through the eyes of the elite citizens who controlled the streets.”

The research is part of a forthcoming book Petersen is co-authoring with Sandra Joshel, professor of history at the University of Washington.