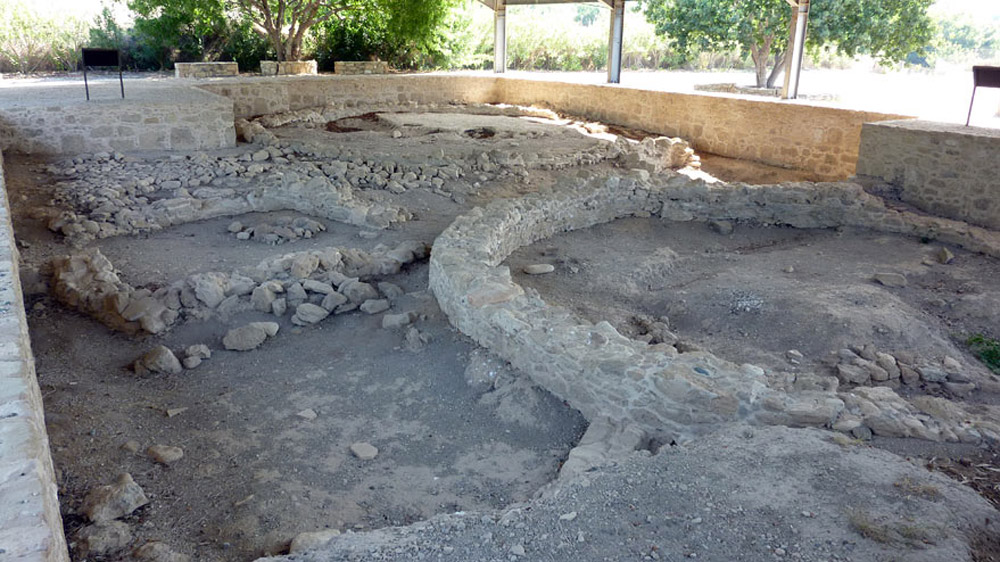 Further evidence of a LC I large building complex and a series of floors dating to the EC III age.

The Department of Antiquities, Ministry of Communications and Works, announces the completion of the 2013 season of excavation at the Bronze Age settlement of Kissonerga-Skalia near Paphos. The excavation was carried out during July by a University of Manchester team under the direction of Dr Lindy Crewe. The team uncovered further evidence of a large building complex dating to the threshold of the Late Cypriot Bronze Age (around 1750–1600 BC), which had been partially revealed in previous seasons and also investigated a series of floors in an earlier domestic area dating to the Early Bronze Age (around 2300–1900 BC).

During the final phase of occupation a large complex covering an area of 750m2 was built, using a variety of techniques with thick stone wall foundations up to 1.2 metres wide. A large wall of uncertain function now extends to over 45 metres long and is not yet fully excavated. After the previous season the wall enclosed an area of around 20 x 10 metres, but this season it has turned back on itself to form an ‘S-shape’.

The team has revealed a large courtyard with a plaster floor on which were found plastered pits, pottery, weights and spindle whorls and evidence for large-scale industrial activities. The space to the southwest of the courtyard wall has now been partially excavated and further walls were revealed, subdividing the area. As with all the architecture in the final phase at Kissonerga-Skalia, the walls do not form right angles, creating a parallelogram rather than a rectangular space. Within this space, a heavily disturbed line of small stones with mud plaster chunks seems to represent the remains of an interior bench running along the wall. Upon the floor an unusually high concentration of fine ware pottery bowls and small juglets were found in the typical local styles of Drab Polished ware and Red Polished ware and it may be a domestic space. It is not clear what kinds of industrial activities were undertaken in other areas of the site but two large storage jars partially embedded in the ground were found adjacent to deep, narrow pits filled with charcoal, along with a small stone-built structure that was filled with fine ashy soil.

In other areas of the site the team investigated earlier domestic structures and there is now evidence for a sequence of five floors, mainly of mud but with two of plaster, separated by layers of dumped material, probably to level the area prior to refurbishing. Pottery styles found indicate a long occupation from the beginning of the Early Cypriot Bronze Age and also attest to contacts with other parts of the island. Unfortunately this is an area heavily disturbed by pits of a later date. The latest floor in this area is dated through the pottery to Early Cypriot III–Middle Cypriot I or Middle Cypriot II and it would appear that Area D was left vacant during the final occupation phase at the site, possibly a source of building material as this may be one explanation for the many pits.

During the 2013 season, two lower floor levels were removed, revealing a series of fine plaster floors, a plaster basin and early architecture on a north-south orientation, in contrast to the later northwestern-southeastern orientation typical of the site. Beneath this sequence of floors there is a final plaster floor above the sterile subsoil which remains to be excavated in future seasons.

Along with the typical finds of large amounts of broken pottery, other objects associated with the architecture investigated this season include stone tools for processing food and other materials, gaming stones, copper chisels and shell, stone and bone pendants and beads.