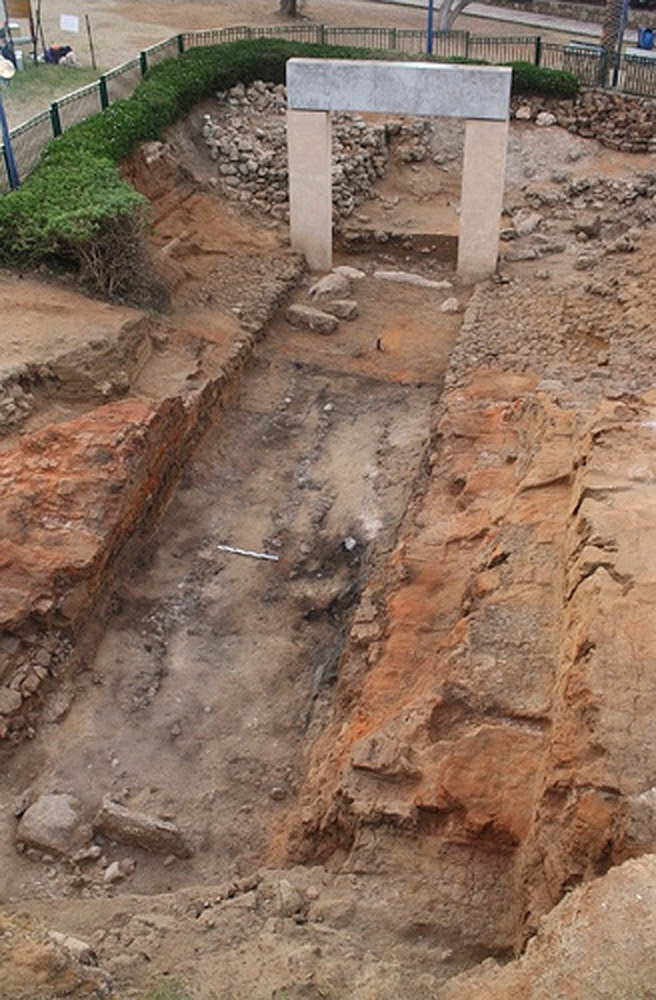 War and peace in an Egyptian fortress in modern day Israel

Since 2011, a team of achaeologists, under the direction of  Aaron A. Burke (University of California, Los Angeles) and Martin Peilstöcker of the Israel Antiquities Authority, have been uncovering some tantalizing new finds at the remains of a 14th century B.C. Egyptian fortress gate complex at the coastal city of Jaffa in Israel. The dig -part of the The Jaffa Cultural Heritage Project (JCHP), a joint project of UCLA, the Johannes-Gutenberg Universitat, Mainz, and IAA- has yielded the first known Egyptian gate ever excavated in Israel.

“New archaeological data combined with well-known historical texts of the Late Bronze Age are now shedding light on the nature of interactions between the Canaanite inhabitants of Jaffa and its environs and the Egyptian inhabitants of the New Kingdom fortress built atop the city’s earlier remains,” report the excavators. “The resulting picture is one colored by episodes of violence and peaceful social interactions in Jaffa over a period of more than 300 years, from ca. 1460 to 1130 BC.”

Excavations in 2012 revealed strong evidence of a violent destruction event, with clues to its extent indicated when excavators discovered a commemorative scarab of Amenhotep III dated to the mid-fourteenth century B.C., found within the upper destruction layers and apparently fallen from what the archaeologists interpreted as a second story administrative office floor.

In 2013, the team exposed the city gate’s passageway below more than 1.5 meters of destruction debris. The finds included arrowheads, a spearhead and lead weight, decorative ivory inlays, numerous charred seeds, a number of ceramic vessels, antlers from deer, and nearly two dozen cedar timbers thought to have once made up the gate’s roof and upper story. The seeds, identified as those of barley, olive pits, grape pips, and chick peas were a welcome find, as they provide an insight to the foods consumed at the site.

The assortment of artifacts painted a picture of a city gate that functioned as something more than a purely defensive structure, a complex that housed administrators, storerooms, and other support facilities. Speaking of the antlers, for example, Burke and Peilstöcker noted that they “suggest that the gate was not a stark and utilitarian space as many reconstructions of Egyptian gates suggest. Instead, it would seem that Egyptian soldiers hung these items within the passageway as trophies of their hunting around Jaffa.”

The timbers, the earliest and largest such ancient timbers from that time period found in Israel to date, are thought to have been used in the construction of the gate’s second story and roof. Reported Burke and Peilstöcker in a recent press release: “They will provide not only important chronological data such as evidence for the date of the construction of the gate complex but also will contribute to refining our understanding of the evolution of Egyptian rule in Canaan since the gate is one in a sequence of gates providing evidence for the earliest Egyptian fortress in Canaan. As important proxies for climate change, the timbers also offer a unique opportunity for an improved study of Late Bronze Age environment.”

A detailed article, entitled The Egyptian Fortress in Jaffa, can be read in the March 2013 issue of Popular Archaeology Magazine.  The results from the 2013 excavations will be presented at the Annual Meeting of the Schools of Oriental Research in Baltimore, MD on November 21, 2013.