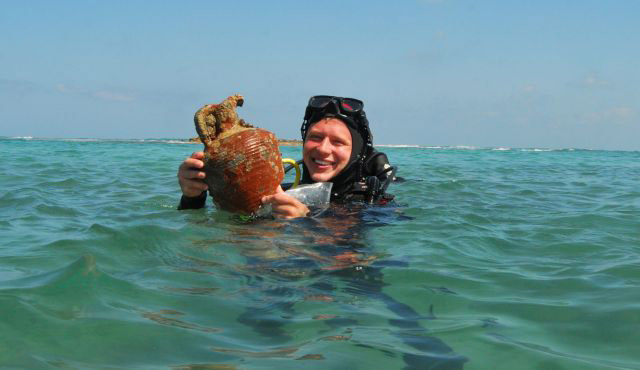 Unlocking the mysteries of an age-old port

MA students of a new University of Haifa programme focusing on Maritime Civilizations arer taking part in an underwater survey off the coast of Tel Dor, Israel, aiming to spot remains of an ancient harbour.

The Tel Dor expedition, some 30 kilometers south of Haifa, is a collaboration between Dr. Assaf Yasur-Landau and Dr. Ayelet Gilboa of the University of Haifa, and Prof. Ilan Sharon of the Hebrew University. Students of the new English-language program, which started its second year this fall, take part in the survey, mostly in shallow waters but also at depths of up to 10 meters of water.

The documented history of Tel Dor begins in the the 13th century BCE and continues through to the Crusader era. Excavators are seeking evidence of the location of a harbor or harbors at the site that are documented in written sources.

On most dives, the students found pottery, including bits of storage jars used in maritime transport, says Yasur-Landau, head of the Haifa University Department of Maritime Civilizations. But they also found large stone anchors. These, he says, are clear evidence that boats used to anchor in both bays.

Some of the anchors in the south bay may date to the Iron Age. Others may be even older, dating to the Bronze Age.

In the north bay, the students found pottery dating to the Persian period (ca. 560-333 BCE) alongside the anchors. Evidently the north bay was in use during that period.

The Crusader quay and the geek

Maura Schonwald, 25, from Oklahoma City, one of the five Americans who took part in the pilot, recalls the thrill of finding the anchors. “You are doing these search patterns in the water and all of a sudden you find a corner of something coming out of the sand, and you brush the sand away and it’s something that’s 3,000 years old. You’ve found it, and it’s part of history,” she says.

Finding the anchors was one thing. Getting them out of the water was another, says Eric Solie, 23, from Alaska. “When you are picking up these huge rocks with your teammates, it’s a very physically demanding team-oriented experience.” Being underwater, they can’t talk to them, making the mission all the more difficult.”

During the one-year English masters program, taught over three semesters, students learn about the sea through a variety of disciplines – archaeology, marine biology, history, ecology, and geology, among others.

The program is based on an existing Hebrew masters that has been running for 40 years. Similar programs exist in other countries. But Israel’s weather is famously balmy and students can step out of the classroom and into the sea all year round, says the professor. Yes, it’s chilly in winter but this is the Mediterranean, not the North Sea.

Maritime archaeology isn’t for everyone, however, Yasur-Landau qualifies. You need to be a “combination of average garden geek and someone who wants to dive in cold water and look for stone anchors.”

With an MA in archaeology from Brandeis under her belt, Catherine Davie, 25 from Little Rock, Arkansas, had been on archaeological digs, but “on land, it’s different,” she says: in the sea, “sometimes you can’t even see your fingertips.” And ultimately, the sea decides. “Underwater, the elements are in charge. If the sea doesn’t want you to succeed, you can’t.”