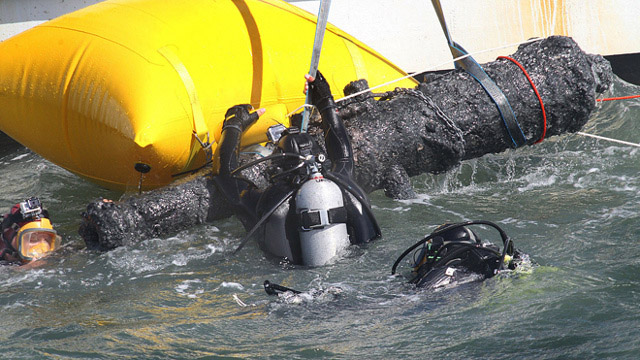 Part of Blackbeard’s Treasure was recovered from the seabed where his ship lies for over 250 years.

With the help of the U.S. Coast Guard on Monday, October 28, 2013, archaeologists with the North Carolina Department of Cultural Resources raised what is to date the biggest motherlode of artifacts yet from the wreckage of Blackbeard’s sunken pirate Ship, Queen Anne’s Revenge, still lying on the seafloor in Beaufort Inlet, North Carolina.

The catch included five complete cannons and two large concretions. A concretion is hardened conglomerations of sand, shells, and coral which begin to build up around artifacts, especially iron objects, soon after they are deposited on the seabed.

Blackbeard is known to have gathered a hodge-podge of cannons from different countries as he equipped his vessel with 40 guns. To date, 29 guns have been located at the shipwreck site near Beaufort. The research team, led by the Underwater Archaeology Branch of the N.C. Department of Cultural Resources, has recovered artifacts from 60 percent of the site, including cannons, anchors, gold dust, animal bones, lead shot, medical and scientific instruments, and much more. Altogether about 280,000 artifacts have been recovered. Full recovery is planned by 2014. An extensive Queen Anne’s Revenge exhibit is at the N.C. Maritime Museum in Beaufort.

Otherwise variously known as Edward Teach or Edward Thatch, Blackbeard served as a privateer during Queen Anne’s War (1701 – 1714). It was sometime soon after the war that he turned to piracy, plying the shipping lanes off the North American coastline and throughout the Caribbean with fellow pirate captains Benjamin Hornigold and Stede Bonnet, plundering scores of vessels for their goods and capturing and co-opting some of their sailors and others with needed skills to man their fleet. Things took a good turn for Blackbeard when in the late fall of 1717, after making their way to Martinique island in the eastern Caribbean, Blackbeard’s fellow pirate Hornigold captured a French slave ship, then known as La Concorde. Large and well-equipped, it made an attractive addition to their fleet, and Hornigold turned it over to Blackbeard. Blackbeard made it his new flagship, renaming it Queen Anne’s Revenge (QAR).

Now empowered with his new flagship, Blackbeard sailed throughout the Caribbean and up the North American coast, plundering new targets and adding yet more to his treasures and his fleet. His flagship’s career ended in 1718, however, when Blackbeard attempted to enter Old Topsail Inlet in North Carolina, today known as Beaufort Inlet. During the attempt, Queen Anne’s Revenge, accompanied by the companion sloop Adventure, ran aground on an ocean bar and were abandoned, never to be used again.

But well over two centuries later, on November 21, 1996, a team from the private research firm Intersal, Inc., discovered a cluster of cannon and anchors on the seabed of Beaufort Inlet. It was first located by Intersal’s director of operations, Mike Daniel, using data from historical research provided by Intersal’s president, Phil Masters, and archaeologist David Moore, nautical archaeology curator at the North Carolina Maritime Museum. A number of artifacts were recovered from the site, including a bronze bell dated to 1705, a sounding weight, an English blunderbuss barrel, a lead cannon apron, 2 cannonballs, cannon tubes, and 2 large anchors. The artifacts, in combination with historical documentation, geographic context, and further research, led the team to conclude that this was indeed the wreckage of Blackbeard’s flagship, Queen Anne’s Revenge. A follow-up dive in 1997, this time by the Underwater Archaeology Branch (UAB) of the North Carolina Office of State Archaeology, afforded archaeologists the opportunity to thoroughly examine the shipwreck, leading to the additional recovery of two cannons, four cannonballs, a pewter platter, pottery fragments and other artifacts.

Since then, more than 280,000 artifacts have been recovered, including 20 cannons, ship timbers, 2 anchors, pewter flatware, medical instruments, gun parts, cannon shot, gold grains, glass wine bottles, and ceramic pieces, to name but a few of the types.