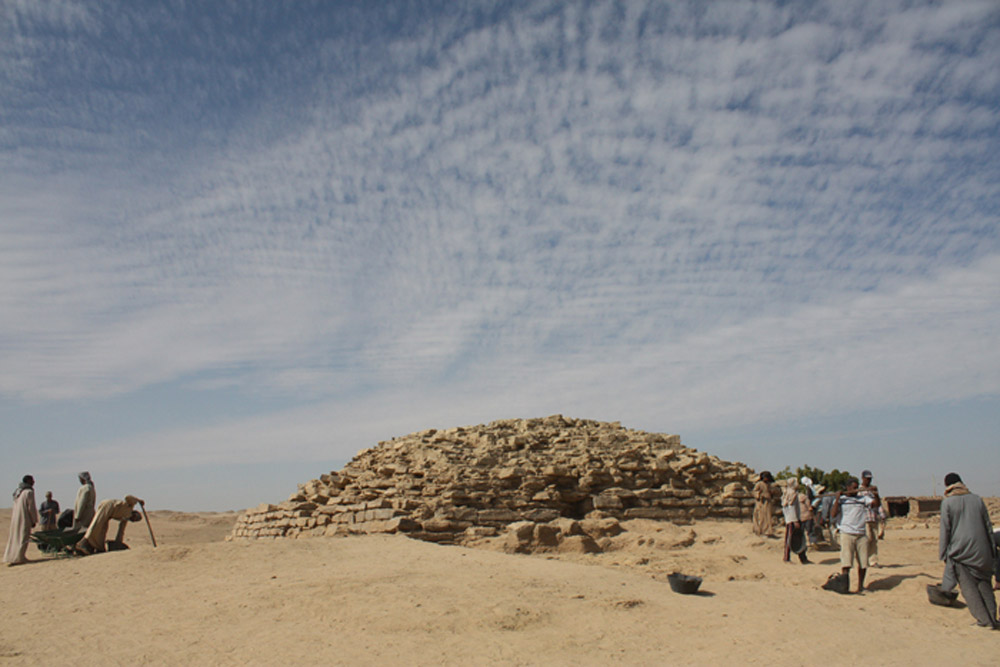 Researchers from the Oriental Institute (The University of Chicago)  currently excavation an Old Kingdom site at Edfu, Upper Egypt, uncovered the remains of a step pyramid dated to 4,600 years ago.

In Egypt, this type of pyramid is mostly known from the monumental funerary monument of King Djoser, in Saqqara (Lower Egypt), which dates from around 2650 BC. However, the newly excavated pyramid in Edfu, slightly later than Djoser’s pyramid and a few decades earlier than the Great Pyramid of Giza,  tells another story.

Made of local sandstone blocks and clay mortar,  lacking internal spaces such as chambers and reaching a hight of only 13 m. at the time of its use, the Edfu pyramid belongs to a group of “provincial pyramids”, which were not intended for burial but were likely linked to the royal cult, in an attempt of the pharaohs to keep track of it along the southern provinces. Up to this day, seven such pyramids are known (including the one from Edfu). Their identical dimensions of 18.4 x 18.6 m betray that they were probably built in the framework of a common building programme.

“The similarities from one pyramid to the other are really amazing, and there is definitely a common plan,” said Gregory Marouard, a research associate at the University of Chicago’s Oriental Institute who led the work at the Edfu pyramid.”The construction itself reflects a certain care and a real expertise in the mastery of stone construction, especially for the adjustment of the most important blocks,”, Marouad adds in a newly published article dedicated to the pyramid, which is built with a core of blocks rising up vertically, and with the addition of two layers of blocks beside it (on top of each other) in order to give the impression of a three-step monument. So, although the final impression recalls the Djoser pyramid, the technique is mostly similar to the one used at the pyramid of Meidum, built by Huni -the last king of the 3rd Dynasty-, or Sneferu, the first king of the 4th Dynasty and Khufu’s father.

The remains of an installation where food offerings appear to have been made with a terminus ante quem the beginning of the reign of Khufu, demonstrates that this monument, and similar ones across the provinces, were probably installed during the time of Huni or Sneferu in order to support a kind of royal cult wich Khufu did not find necessary to continue maintain.

“It seems Khufu no longer thought there was a need to maintain a small pyramid at Edfu, or elsewhere in southern Egypt”, Marouard said, adding that the Pharaoh, feeling politically secure in southern Egypt, focused all the resources on building the Great Pyramid at Giza, which is close to the Egyptian capital at Memphis. This assumption is also supported by a group of inscription on papyri found in the ancient Red Sea port of Wadi el Jarf and dating to the end of Khufu’s time. These documents clearly demonstrate that the king was indeed directing all his resources towards Giza, to support the Great Pyramid building programme.

As for the site at Edfu, it continued being used by the locals at a later date, but its second use was fundamentally different than the initial one. Rough inscriptions on the pyramid’s surface and a group of child and infant burials found right under those inscriptions indicate that private individuals -among whom a “Mistress of the House” (typical formal title for any ancient Egyptian woman) mentioned in the inscriptions – used the pyramid’s ruins to establish a burial area for the local community’s children.

Initial results of the excavation project were presented during the 39th Annual Society for the Study of Egyptian Antiquities Symposium on “Pyramids: The Mountains of Pharaoh”, held in Toronto. Child burials and associated isncriptions are to be published in the near future.