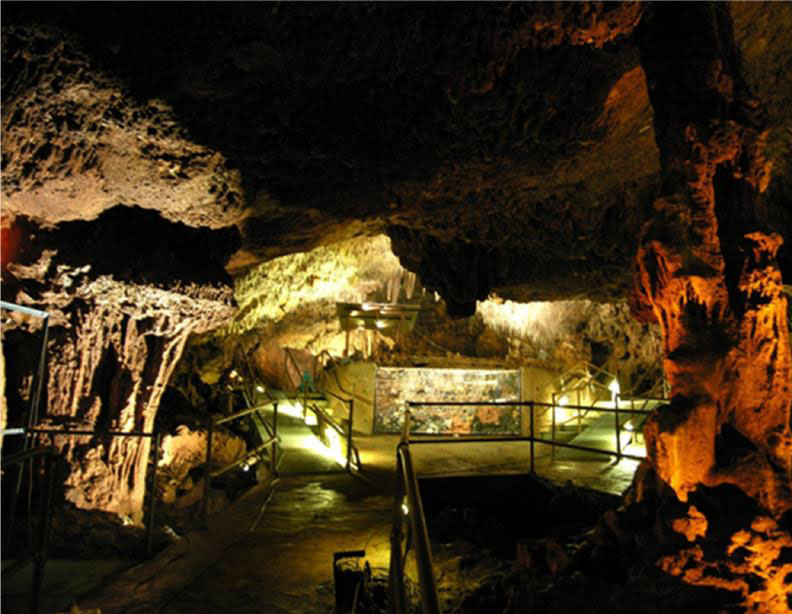 Past and present research

“Alepotrypa Cave, located in Diros, Lakonia, is a massive karstic formation of several chambers ending at a deep freshwater lake. It was used for more than 3000 years as a residential area, a storage space, a burial site, and a locus of ritual activity. This is suggested by a rich archaeological record that includes a variety of features, such as hearths, clay ovens, clay floors, and primary and secondary burials. Also, large quantities of food refuse, such as domesticated and wild animal remains, fish bones, marine shells, and botanical material have been found as well as a diverse inventory of artifacts comprised of large storage vessels, a massive concentration of deliberately broken decorated pots, chipped and ground stone tools, bone tools, weaving equipment, figurines, copper artifacts, and shell, bone, and stone ornaments.

“Recent survey in conjunction with geophysical analyses at the Diros Bay area has also located the adjacent open-air settlement. New evidence from radiocarbon dating of human burials and charcoal, both inside and outside the cave, place it with confidence in the Middle to Final Neolithic. Additional microstratigraphic analysis confirms multiple successive habitation layers inside the cave as well as hiatuses of occupation. Furthermore, a series of more specialized analyses are applied to the Alepotrypa Cave material such as carbon, nitrogen, strontium, and sulfur isotopes, phytolithic, biodistance, archaeobotanical, petrographic, and XRF of obsidian, in order to maximize the extracted information. Finally, the large quantities of artifacts that have been found since the 1970’s are now plotted and spatially situated on a detailed map using GIS to systematically correlate the material culture and refine the context of Alepotrypa Cave and incorporate this marginal site within the contemporary Neolithic cosmos”.

Anastasia Papathanasiou (Ephorate of Palaeoanthropology and Speleology of Southern Greece) will give a lecture about the Alepotrypa Cave on Friday 21 March 2014 (19:00), at the Swedish Institute at Athens (Μitseon 9, Acropolis Metro station).

The event is organized by the Aegeus Society for Aegean Prehistory and the Swedish Institute at Athens.