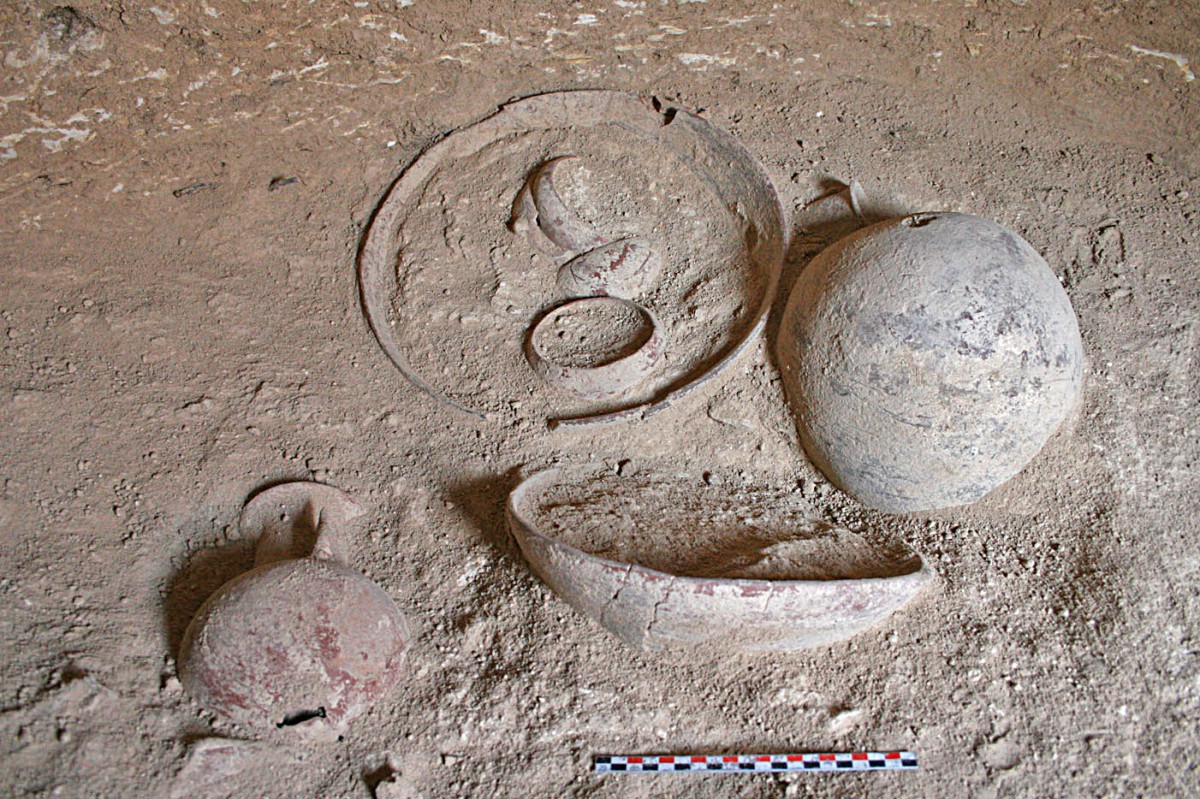 The Bronze Age occupation sequence at Erimi-Laonin tou Porakou revealed two main phases, with a series of related sub-phases ranging from the Middle to the very beginning of Late Bronze Age period (EC III/MCI- LC I); The site area was then scanty frequented during the late-Hellenistic and Roman periods, apparently following a long abandonment phase.

The focus of the 2014 season was on the investigation of three significant areas, different in character with regards to their use: the top hill area (Area A), where an extended workshop complex was identified; the domestic quarter (Area B) and the southern cemetery (Area E).

The excavation in the workshop complex yielded positive results and new data related was collected relating to the architecture, the building techniques and the stratigraphy of the Bronze Age occupation of this productive area. At this point, the whole workshop complex extends over the 30×30 m. area currently under investigation. A complete open-air working area extends towards the eastern area of the complex, while a series of two new large rectangular units were cleared on the western and eastern wings with a completely preserved monolithic stone threshold, as well as a pivot system and locking devices. A sudden collapse of the wall structures allowed the preservation of materials in their original place.

The analysis of botanical remains from significant contexts, together with the evidence for working installations (basins, channels) and assemblages of objects (spindle-whorls, pouring vessels, containers) strengthen the hypothesis that weaving and textile dying were the main activities performed in the complex.

The investigation of the first lower terrace, where the domestic quarter is located (Area B), exposed the foundation structures of what appears to be a large housing area, extending over the 20×15 m. area currently being explored. A series of five roofed domestic units (Units 1-3, 5, 7) are organized around open rectangular courts (Courts 4, 6), equipped with small working installations (pots emplacements and basins carved into the limestone bedrock). The investigation of a stratigraphic deposit within Unit 3 evidenced a sequence of two main phases of occupation in the Middle Bronze Age, contemporary with the workshop complex at the top of the hill.

The southern cemetery area (Area E) extends over a series of terraces sloping towards the South-East of the settlement. The funerary cluster is characterized by a series of rock-cut pit and chamber tombs, dated back to the same chronological horizon of the settlement. Two interesting graves were investigated this season, characterized by unusual architectural features and burial rituals.

Pit tomb 427 appears to have been a bone repository, probably connected with secondary inhumations. Chamber tomb 428 (fig. 1) revealed a multiple inhumation, the skeletons deliberately positioned in one section of the burial chamber during a secondary episode, possibly as part of a funerary ritual. As far as burial goods are concerned, a rich assemblage of ceramic vessels comes from this burial context. The repertoire includes small and medium size bowls, juglets and jars with applied and incised decoration as well as a collection of clay decorated spindle-whorls, stone beads and a complete bronze dagger blade with a rat-tail tang. The ceramic assemblage includes possibly imported vessels from central and western Cyprus, whose date ranges from the beginning to the very end of Middle Bronze Age period, thus confirming the long-term use of this chamber for multiple burials.

The fieldwork season involved a team of archaeologists of the University of Turin with the support of four anthropologists and a team of five restorers from the Universities of Turin and Florence. A team of three topographers from the Ge.Co Institute (Italy) performed the laser-scanner mapping of the settlement and of the funerary structures.