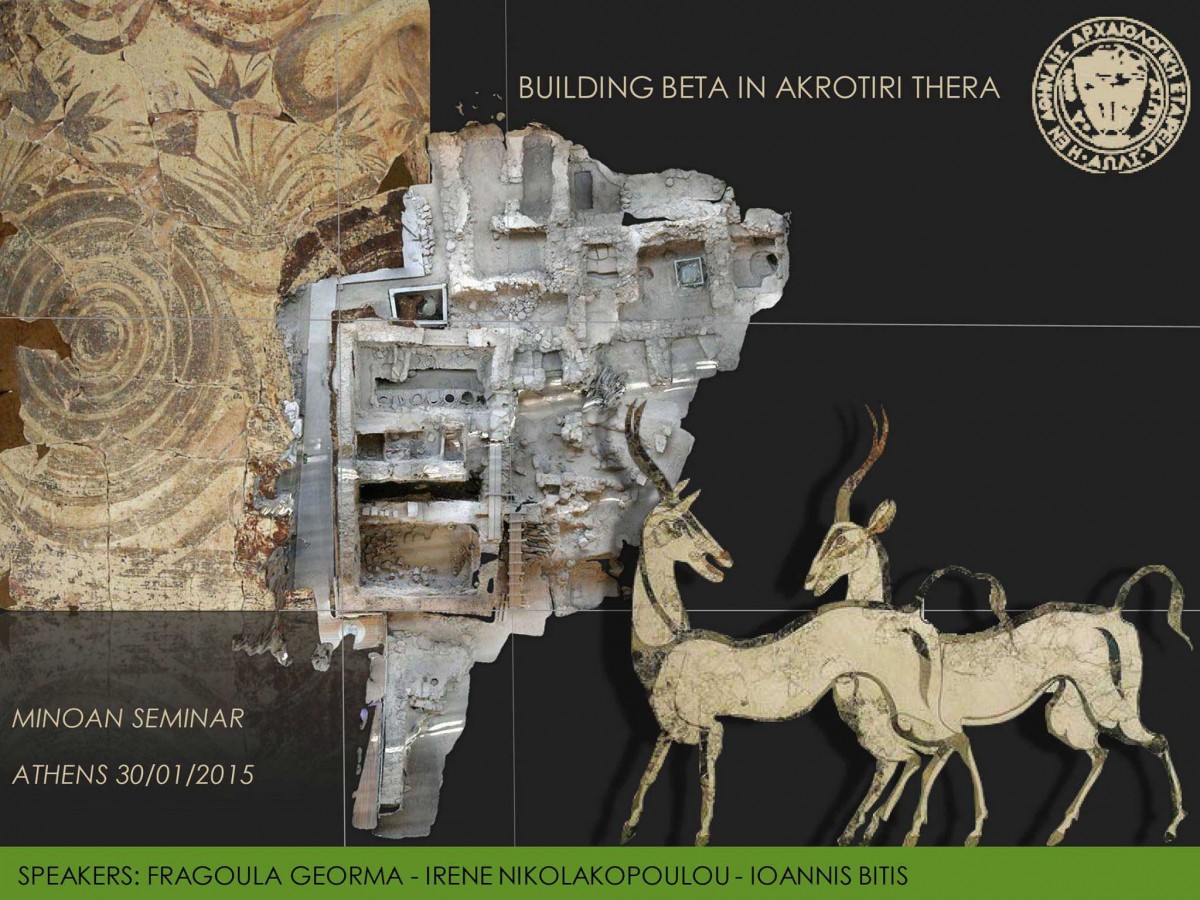 Akrotiri on Thera is known as the “Pompeii of the prehistoric Aegean” due to the remarkable state of preservation of the flourishing settlement dated to c. 1600 BC, buried beneath thick layers of volcanic ash and pumice. Building Beta is one of the first buildings excavated by Spyridon Marinatos during 1967-1970. It is a two-storied domestic unit, of c. 260 sq. m., the western part excellently preserved, while the eastern part is extensively damaged due to a passing torrent. The building was adorned with the famous wall paintings of the Boxing Boys, the Antelopes and the Blue Monkeys. The pottery retrieved provides important information on the activities of the inhabitants and trade transactions.

“Building Beta at Akrotiri, Thera. Wall paintings, pottery and architecture” is the title of the next Minoan Seminar, presented by Fragoula Georma, Irene Nikolakopoulou, and Ioannis Bitis. The seminar will be given on Friday 30 January 2015, at 6.30 p.m., at the Archaeological Society, Panepistimiou 22, Athens. It will be in Greek with powerpoint in English.

The research and publication project initiated by the speakers in 2005 aims at the synthetic presentation of data from the Marinatos excavation integrated with new evidence from the study of material remains and new detailed architectural plans of the building. The project focused on the removal of wall paintings from the walls of the building and restoration of fragments, leading to new interpretative approaches, study and conservation of ceramics, and the drawing of detailed architectural plans using a total station, applied on a new photogrammetry method, which enables the production of ‘orthophotographs’ and accurate three-dimensional models.

The integrated study of the evidence is expected to offer important information on the building phases and architectural modifications/additions, as well as on the function of the unit during its life-span in LC I until its final destruction by the volcanic eruption.