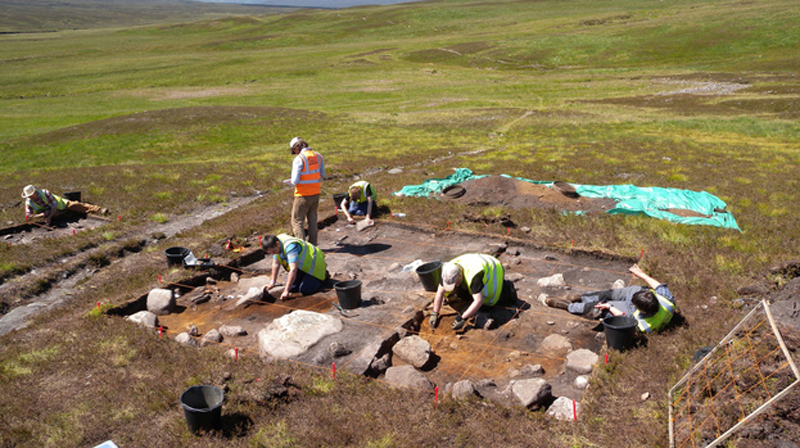 Excavations in the Cairngorm glens

Archaeologists working on the National Trust for Scotland’s Mar Lodge Estate in Aberdeenshire have uncovered evidence that people were active in this mountainous landscape thousands of years earlier than previously thought.

Excavations at sites deep in the Cairngorm glens have produced radiocarbon dates which demonstrate a human presence as far back as 8,100 BC, with some places being revisited over many thousands of years.

The first evidence that hunter-gatherer groups were living in the Cairngorms was discovered on the Mar Lodge Estate in 2003, when a major footpath repair programme turned up prehistoric worked stone artefacts. Without radiocarbon dates only an approximate date for the artefacts was possible at the time, with initial estimates of around 5,000 BC.

A partnership among the National Trust for Scotland and archaeologists and environmental scientists from Aberdeen University, University College Dublin and Stirling University established the Upper Dee Tributaries Project in 2013 to develop our understanding of the Estate’s prehistory. Now entering its third season, the project is casting fascinating light on how early people used these upland landscapes after the retreat of the last glaciers – something about which very little is known in Scotland.

Radiocarbon dates of 6,200 – 6,100 BC from a site in Glen Geldie are remarkable because they coincide with the most dramatic climatic deterioration seen since the last Ice Age, in which permanent snow fields would have been a feature of the Cairngorms, and glaciers may have started reforming. The site is being excavated by a team from University College Dublin.

Trust Archaeologist Dr Shannon Fraser said: “It is incredible to think that what we have discovered at this one spot in a vast landscape may represent a small group of people stopping for only a night or two, repairing their hunting equipment and then moving on. Glen Geldie is a very chilly place today, even with all our modern outdoor clothing – it is hard to imagine what it must have been like in the much harsher climate 8,000 years ago.”

The earliest dates come from a site in Glen Dee, at a key stopping point for travellers moving through mountain passes between Deeside and Speyside, with links both to north west Scotland and the North Sea coast. Excavations by Aberdeen University are revealing a complex history of settlement, with people gathering by the riverside as early as c. 8,100 BC – perhaps only a few hundred years after communities begin to move back into Scotland as the ice retreated. The sandy beach at this ideal salmon-fishing ground continued to attract people for thousands of years, until at least c. 900 BC – the late Bronze Age.

NOTES
1. The National Trust for Scotland