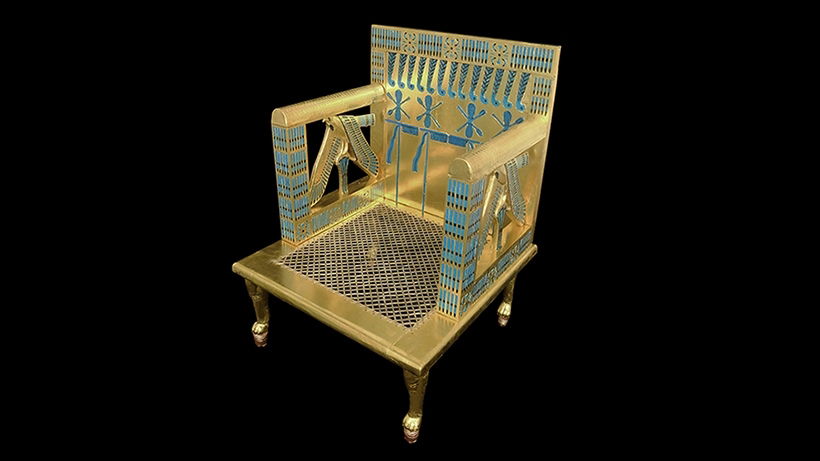 Exhibition at the Harvard Semitic Museum

An interdisciplinary collaboration at Harvard University has created a full-scale reproduction of an ancient Egyptian throne belonging to Queen Hetepheres (about 2550 BC). Τhe chair’s materials are based on the ancient original: cedar, bright blue faience tiles, gold foil, gesso, cordage seating, and copper. This experiment in archaeological visualization is a triumph of reconstruction because the only guidance came from thousands of tiny, jumbled fragments and 90-year old expedition records. The reproduction chair is the centerpiece of the new exhibit, Recreating the Throne of Egyptian Queen Hetepheres.

The exhibit is now open to the public at the Harvard Semitic Museum and will remain on view indefinitely.

In 1925, the Harvard University–Boston Museum of Fine Arts Expedition discovered a small, unfinished chamber almost 100 feet underground at the famous site of Giza. It contained the deteriorated burial equipment, sarcophagus, and other objects belonging to Queen Hetepheres, mother of King Khufu, the pharaoh who built the Great Pyramid nearby. In the 1930s, conservators restored and reconstructed some of the furniture, but until today, the queen’s elaborate chair existed only on paper.

The Giza Project team created a 3D digital model of the tomb and its contents, and then used a computer-controlled, five-axis milling machine, plus lots of human labor, to fabricate the chair. The goal of this new museum display object and research/teaching tool was to reconstruct the chair’s iconography and to document the ancient workflow that the Egyptians used to construct such a masterpiece from the Pyramid Age.