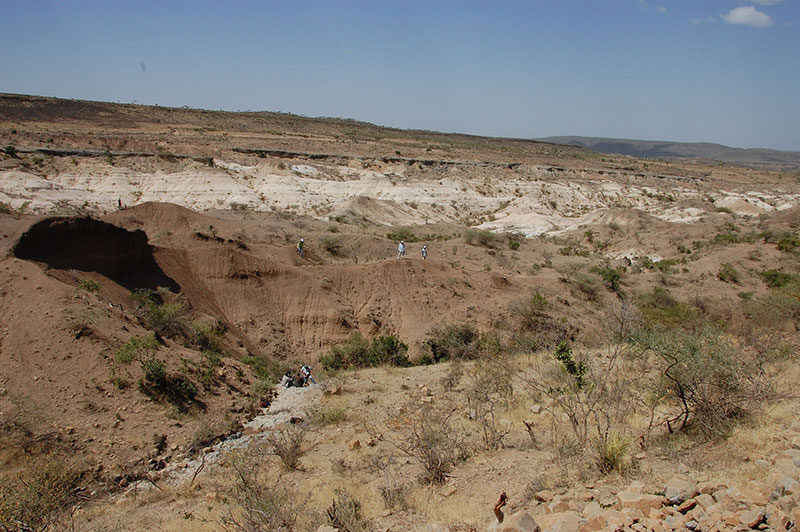 A paper in the latest issue of the journal Nature suggests a common ancestor of apes and humans, Chororapithecus abyssinicus, evolved in Africa, not Eurasia, two million years earlier than previously thought.

“Our new research supports early divergence: 10 million years ago for the human-gorilla split and 8 million years ago for our split from chimpanzees,” said Los Alamos National Laboratory geologist and senior team member Giday WoldeGabriel. “That’s at least 2 million years earlier than previous estimates, which were based on genetic science that lacked fossil evidence.”

“Our analysis of C. abyssinicus fossils reveals the ape to be only 8 million years old, younger than previously thought. This is the time period when human and African ape lines were thought to have split, but no fossils from this period had been found until now.”

Chimpanzees, gorillas, orangutans and humans compose the biological family Hominidae. Our knowledge of hominid evolution—that is, when and how humans evolved away from the great ape family tree—has significantly increased in recent years, aided by unearthed fossils from Ethiopia, including the C. abyssinicus, a species of great ape.

The renowned international team that discovered the extinct gorilla-like species C. abyssinicus (reported in the journal Nature in 2007) reports new field observations and geological techniques that the authors say revise the age-constraint of the human split from their brethren.

The authors’ new paper, “New geological and palaeontological age constraint for the gorilla–human lineage split,” was published this week in Nature. WoldeGabriel coauthored the paper and his role was to characterize the volcanic ash and provide chemistry for local and regional correlation of the ashes sandwiching the fossils from Ethiopia’s Chorora area, a region where copious volcanic eruptions and earthquakes entombed fossils recently uplifted via ground motion and erosion.

Filling gaps in the fossil record

Most of the senior members of the Chorora research team also belong to the Middle Awash project team that has recovered the fossil remains of at least eight hominid species, including some of the earliest hominids, spanning nearly 6 million years.

In the 1990s, before this team excavated the gorilla-like C. abyssinicus, they discovered the nearly intact skeleton of the 4.4-million-year-old species Ardipithecus ramidus (nicknamed “Ardi”) and its relative, the million-year-older species Ardipithecus kadabba. These Ardipithecus fossils were the earliest ancestor of humans after they diverged from the main ape lineage of the primate family tree, neither ape-like nor chimp-like, yet not human either. Notably, both were bipedal—they walked upright.

While the team was still investigating Ardi and Kadabba, they published their results about C. abyssinicus. From the collection of nine fossilized teeth from multiple C. abyssinicus individuals, the team surmised that these teeth were gorilla-like, adapted for a fibrous diet. Based on their research from the Chorora, Kadabba and Ardi finds, the team says the common ancestor of chimps and humans lived earlier than had been evidenced by genetic and molecular studies, which placed the split about 5 million years ago.

According to the paper, C. abyssinicus revealed answers about gorilla lineage but also provided fossil evidence that our common ancestor migrated from Africa, not Eurasia, where fossils were more prolific prior to this discovery of multiple skeletons. While some skeptics say that more fossil evidence is needed before they accept this team’s conclusions, many agree that the discovery of a fossil ape from this time period is important since only one other had been found.

WoldeGabriel and the research team used a variety of methods to determine the age of teeth they found at the Chorora Formation. They estimated the age of the volcanic rocks and sediments that encased the fossils with argon-dating and paleomagnetic methods. The team investigated patterns of magnetic reversals—another method to determine age based on knowledge about an era’s magnetic orientation—and calibrated the sediments containing the fossils using Geomagnetic Polarity Time Scale (GPTS).

Through fieldwork, volcanic ash chemistry and geochronology, WoldeGabriel helped nail down the age of the fossils to approximately 8 million years old.  Based on this new fossil evidence and analysis, the team suggests that the human branch of the tree (shared with chimpanzees) split away from gorillas about 10 million years ago—at least 2 million years earlier than previously claimed.