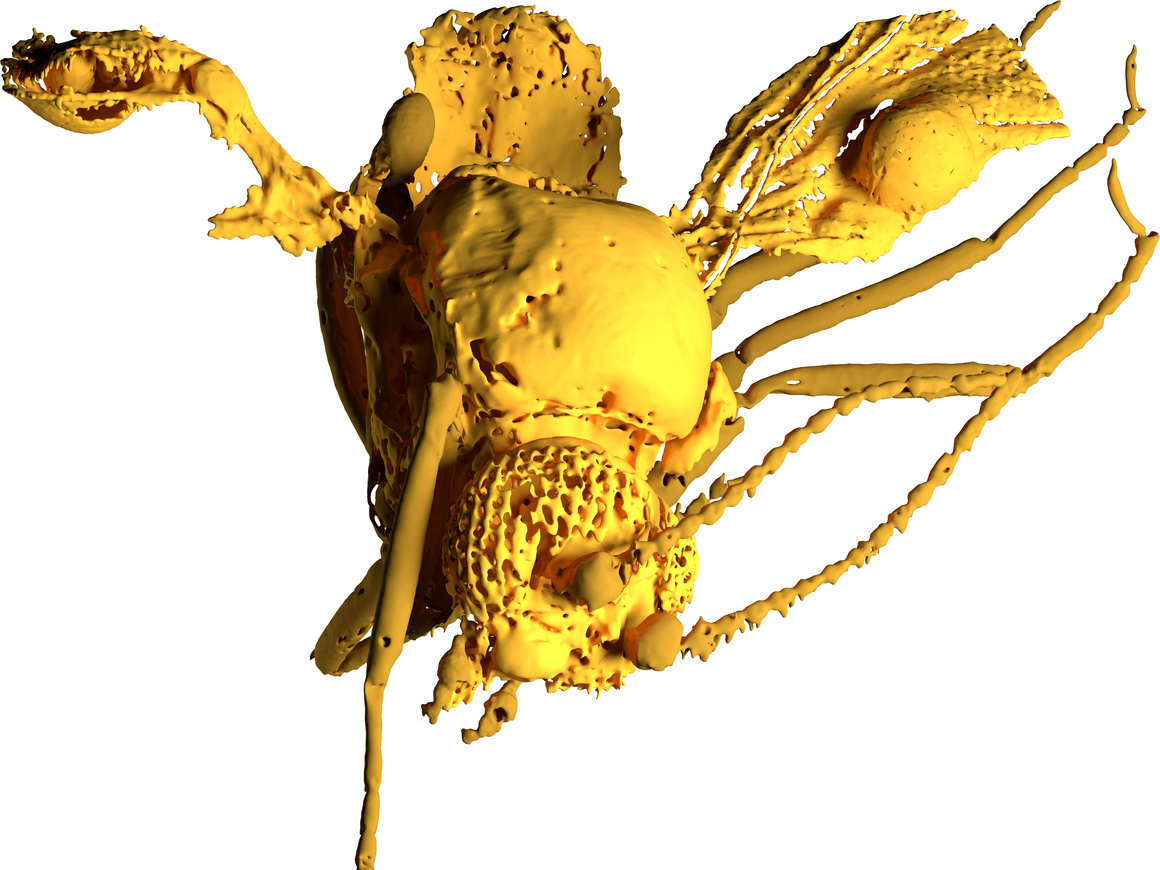 ‘Blind dates’ in the amber world

“Old” doesn’t always have to mean “primitive”: paleontologists at the University of Bonn have discovered a tiny biting midge no larger than one millimeter in 54 million-year-old amber.

The insect possesses a vesicular structure at the front edge of the wings. The researchers assume that these “pockets” were used by the female midge to collect store and spray disseminate pheromones in an unusually efficient way in order to attract sexual partnersmales. Today’s biting midges use significantly simpler attractant evaporators structures for pheromone release on their abdomen. The results are now being presented in the renowned journal Scientific Reports.

Everyone is familiar with the tiny midges that pounce on you in swarms in a forest or in meadows and whose bites are incredibly painful. Biting midges are diverse and found all over the world. More than 190 species have been identified in Germany. Paleontologists at the University of Bonn, together with scientists from the Alexander Koenig Research Museum in Bonn as well as the Universities of Kassel, Gdańsk (Poland) and Lucknow (India) with the Museum for Materials Research at the Helmholtz-Zentrum Geesthacht, have now discovered and described a new species in 54 million-year-old amber.

Frauke Stebner, PhD student at the Steinmann Institute at the University of Bonn, dug for amber in India. In doing so, she came across the fossilized tree resin with its unusual, barely one millimeter-long inclusion. “Often, the insects in amber can only be identified as black marks,” reports the scientist. Raw amber is as opaque as a malt lozenge. Only elaborate grinding and polishing work allowed the tiny creature to be seen. The insect could be viewed through the microscope as if through an amber window.

The tiny creature’s unusual structures only revealed themselves in detail when the amber went under the microscope at the German electron synchrotron (DESY). As a three-dimensional digital model of the female biting midge shows, it possesses a unique, vesicular structure at the front edge of both of its wings. “Biting midge species alive today do not have these ‘pockets’ on their wings,” reports Stebner. Following extensive literature research, the scientists are certain: a biting midge with this kind of wing structure has never been described before.

The structure protrudes from the wings like a bubble that is open at the bottom with an edge made from fine hairs. The scientists puzzled over the significance of this fossil, and compared it to other speciesinsects. They only found what they were looking for in highly developed butterflies. “These have very similar pockets on their front wings, which they use to spray pheromones into the air in order to attract a mate,” reports Stebner. The position at the edge of the wing makes it possible to spray the messenger substance as widely as possible into the surrounding air. The small hairs clearly ensure, via turbulence, that the distribution is even more successful.

Present-day biting midges use attractants for their “blind dates” – however, they do not distribute the substances from their wings but instead from their abdomen. “It is noticeable that the pheromone evaporators in the fossil are much more complex than in present-day biting midges,” says Prof. Jes Rust, who supervised the dissertation by Frauke Stebner. The environmental conditions in the 54 million-year-old primeval forests in present-day India clearly made such an adaptation necessary. Presumably there were various species of insect at that time that all wanted to attract their sexual partners using pheromones. Unusually effective distribution techniques were probably necessary in order to thrive in this “pheromone concert”.