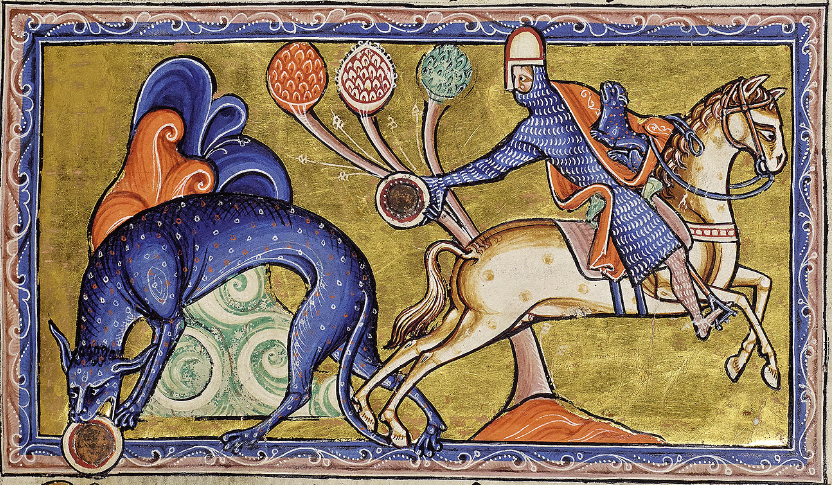 A lavishly illustrated medieval book which once belonged to King Henry VIII was not created for the royal elite but was actually a tool for teaching, new digitally enhanced photography has confirmed.

The Aberdeen Bestiary, created in England in around 1200 and first documented in the Royal Library at Westminster Palace in 1542, is one of the finest surviving examples of a medieval illuminated manuscript and has been in the care of the University of Aberdeen for almost four centuries.

It has now been digitally enhanced and made available online for the first time in high definition – returning the precious book to its original purpose of learning and revealing details previously unseen to the naked eye.

This enhancement has provided answers for experts who have long debated whether the Bestiary, which is lavishly illustrated in gold leaf, was commissioned for a unique high-status client or seized during King Henry’s reign from a dissolved monastic library.

Professor Jane Geddes, an art historian from the University of Aberdeen, says marks and annotations that were not previously visible point to it having been handpicked by scouts of King Henry VIII when they scoured monasteries for valuables, rather than it being commissioned in the first place for a royal or high-ranking client.

“The Aberdeen Bestiary is one of the most lavish ever produced but it was never fully completed and so the edges of the pages were not finished and tidied up,” she said. “This means that the tiny notes from those who created it still remain in the margins providing invaluable clues about its creation and provenance.

“Some were visible to the naked eye but digitisation has revealed many more which had simply looked like imperfections in the parchment.

“When we examine these in detail we can see clear evidence that it was produced in a busy scriptorium. There are sketches in the margin, newly visible with enhanced photography, which show the artist practising with models.

“Many images also have prick marks all around them. This technique called ‘pouncing’ was a way to transfer an image to another document. Often they damaged the illumination on the reverse of the page and this shows that when it was produced, the need to make copies was more important than keeping the book pristine.”

The new photography has also enabled experts at the University to identify stress marks on the text and previously unseen fingerprints which all point to a teaching purpose in its creation.

“On many of the words there are tiny marks which would have provided a guide to the correct pronunciation when the book was being read aloud,” Professor Geddes adds. “This shows the book was designed for an audience, probably of teacher and pupils, and used to provide a Christian moral message through both its Latin words and striking illustrations.

“We’ve also been able to see for the first time that most pages have dirty finger marks in the bottom corner, from turning the folio. But at least one has repeated dirty thumb marks in the centre of the top margin, created by turning the book around for public viewing.

“This all suggests that it was a book created for the enjoyment of many rather than to be held as a private treasure for the wealthy elite, meaning that it was most likely seized by Henry VIII during the dissolution of the monasteries rather than created for one of his ancestors.”

Siobhán Convery, Head of Special Collections at the University of Aberdeen, said she was delighted to be able to bring the 800-year-old ‘University treasure’ full circle to once again make it a tool for learning.

“The Aberdeen Bestiary is the jewel in the crown of the University’s holdings and attracts interest from all around the world.

“A website was created for it back in 1996 allowing people across the world to get access to this extraordinary manuscript but obviously since that time technology has moved on considerably and the quality of the new digital imagery is truly remarkable.

“All the pages have been photographed at high resolution so viewers can zoom in to minute details. It allows you to examine the precise brush strokes of the artist. The quality of paint and gold leaf and with its vivid colours and graceful outlines is spectacularly beautiful

“The team at the University has created a wonderful new web site which allows the book to be virtually examined in high definition and ‘handled’ as it was during its working life.”

About the Aberdeen Bestiary

The Aberdeen Bestiary is an exquisite illuminated manuscript from the 12th-century, rendered in rich gold and magnificent colour. It is a work of extraordinary artistry and craftsmanship in which tales of animals are used to illustrate essential moral beliefs.

The Bestiary first came to Aberdeen in 1625 when it was bequeathed to the University’s Marischal College by Thomas Reid, a former regent of the College and the founder of the first public reference library in Scotland.

Reid, who served as Latin secretary to King James VI and I, is said to have been given the book by his friend Patrick Young, son of the Royal Librarian to the King.