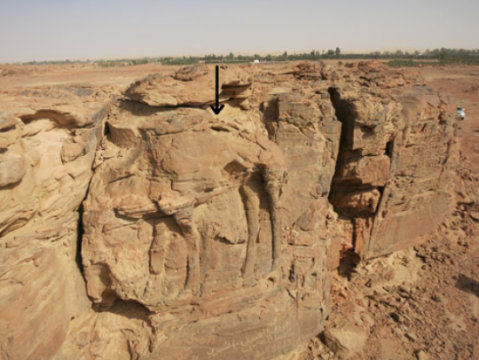 They date back to the first centuries BC or AD

At a remarkable site in northwest Saudi Arabia, a CNRS archaeologist and colleagues from the Saudi Commission for Tourism and National Heritage (SCTH) have discovered camelid sculptures unlike any others in the region. They are thought to date back to the first centuries BC or AD. The find sheds new light on the evolution of rock art in the Arabian Peninsula and is the subject of an article published in Antiquity (February 2018).

Located in the province of Al Jawf in northwest Saudi Arabia, Camel Site, as it is known, was explored in 2016 and 2017 by a Franco-Saudi research team. The sculptures, some incomplete, were executed on three rocky spurs there. Though natural erosion has partly destroyed some of the works, as well as any traces of tools, the researchers were able to identify a dozen or so reliefs of varying depths representing camelids and equids. The life-sized sculpted animals are depicted without harnessing in a natural setting. One scene in particular is unprecedented: it features a dromedary meeting a donkey, an animal rarely represented in rock art. Some of the works are thus thematically very distinct from the representations often found in this region. Technically, they also differ from those discovered at other Saudi sites–frequently simple engravings of dromedaries without relief–or the sculpted facades of Al ?ijr (Madâ’in ?âli?). In addition, certain Camel Site sculptures on upper rock faces demonstrate indisputable technical skills. Camel Site can now be considered a major showcase of Saudi rock art in a region especially propitious for archaeological discovery.

Though the site is hard to date, comparison with a relief at Petra (Jordan) leads the researchers to believe the sculptures were completed in the first centuries BC or AD. Its desert setting and proximity to caravan routes suggest Camel Site–ill suited for permanent settlement–was a stopover where travelers could rest or a site of worship.