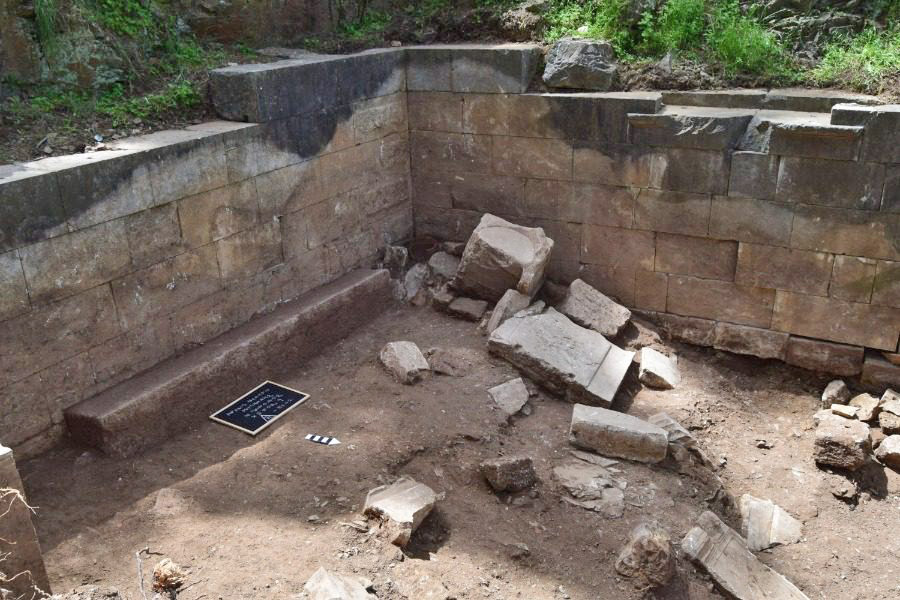 According to Lesvos’ news website ‟Sto Nisi″ (www.stonisi.gr), a sanctuary of Nemesis of the 1st century AD was brought to light in this year’s continuing excavation at the ancient theatre of Mytilene, supervised by Pavlos Triantafyllidis, head of the Lesvos Ephorate of Antiquities.

Specifically, the sanctuary of Nemesis was uncovered on the south parodos of the ancient theatre, under successive layers of large stone plinths originating from the south parodos and skene, and which were removed. The identity of the sanctuary is confirmed by a stone seat for depositing offerings and libations, as well as a significant number of votive inscriptions of priests and eminent persons.

Mr Triantafyllidis said that ‟It is no accident that a sanctuary of Nemesis exists inside the south parodos, since in the theatre’s Early Roman period construction of the underground arena in the Hellenistic orchestra allowed for the spectacular duels between the gladiators, whose families lived in Mytilene. The existence of a sanctuary of Nemesis was necessary since the gladiators’ combat had to be rewarded by the administering of justice and for the best among them to be proclaimed a victor”.

It is worth mentioning that, on the occasion of this important find that enhances the significance of the site of the ancient theatre, the interdisciplinary collaboration continues between the Lesvos Ephorate of Antiquities and the School of Architecture of the Technical University of Bari, Italy. Archaeological and architectural/-geometric documentation is being conducted of the ancient theatre of Mytilene. This collaboration has brought significant results to the research on this important monument.

Apart for studying the building material that survives both in situ and scattered round the ancient theatre, Professors Georgio Rocco and Monica Livadiotti have pointed out at least two phases of the theatre in the Hellenistic (3rd c. BC) and Roman period (1st c. BC).