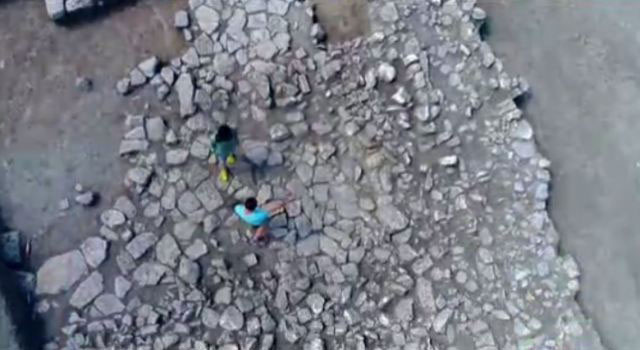 The third satellite town of the city of Pliska

Rescue archaeological excavations for the construction of the Turkish Stream natural gas pipeline (dubbed “Balkan Stream” by the Bulgarian government) have yielded a surprising discovery: a completely unknown medieval town described as the third satellite town of the city of Pliska, the capital of the First Bulgarian Empire between 680 and 893 AD.

Pliska was the first capital of the Ancient Bulgars south of the Danube River. In addition to having been the capital of the First Bulgarian Empire (632/680 – 1018 AD) for more than 200 years, it was also the largest city in medieval Europe in terms of territory.

While not as densely populated, with a total enclosed area of 23 square kilometers it was substantially larger than Constantinople, capital of the Byzantine (Eastern Roman) Empire, or Aachen, capital of Charlemagne’s Carolingian Empire.

Recent discoveries have shown that Pliska was inhabited as early as the Bronze Age. As the First Bulgarian Empire officially adopted Christianity in 864-865 AD, Pliska also became the home to one of the largest churches and monastery complexes in Europe known as the Great Basilica.

Up until now, Bulgarian archaeologists and historians had been aware of two satellite towns of the Ancient Bulgar capital Pliska – the Kabiyuk Fortress, and the Stan Fortress.

An archaeological team, however, has now discovered a third satellite town of Pliska located barely 10 kilometers outside the first capital south of the Danube River of the First Bulgarian Empire.

The discovery has been made thanks to the rescue digs for the Turkish Stream natural gas pipeline (which sends Russian natural gas to Turkey via the Black Sea, and from there northwest towards Europe via Bulgaria and Serbia – although the Bulgarian government insists on calling the extension of Turkish Stream on Bulgarian/EU territory “Balkan Stream”).

The newly discovered satellite town outside of Pliska has been found in the middle of a field, on agricultural land, near the modern-day town of Belogradets, in the Shumen District, in Northeast Bulgaria. It dates back to the 8th – 10th century AD.

The archaeologists are describing the discovery of the previously unknown medieval settlement as a matter of great deal of luck considering the fact that they are excavating a long but narrow strip of land where the pipes for the Turkish Stream / Balkan Stream natural gas pipelines are going to be laid.

Not unlike the fortresses near Kabiyuk and Stan, this third known satellite town of Pliska replicates the urban planning of the Ancient Bulgar capital.

The large settlement contains buildings which seemingly were inhabited by bolyars (boyars), the highest ranking nobles after the monarch in the medieval Bulgarian Empire as well as the dwellings of their service staff and ordinary residents.

One of the buildings exposed inside the newly discovered satellite of Pliska is particularly large, with double-sided masonry, and walls which were more than 1 meter thick.

“This means that the building had a monumental character. This is confirmed not only by the thickness of the walls but also by the horizontal slabs that were used to tile the floors of the rooms. We have also discovered parts from water pipes,” explains lead archaeologist Dr. Andrey Aladzhov from the National Institute and Museum of Archaeology in Sofia in a report of the Bulgarian National Television.

The luxury lifestyle of the bolyar (boyar) nobles inhabiting the building in the 10th century is also proven by the discovery of expensive fine ceramics as well as parts of gold earrings reminiscent of the Preslav Gold Treasure, the 10th century gold treasure worn by the Bulgarian Empress (Tsaritsa) and probably made in the Byzantine capital Constantinople.

The Preslav Gold Treasure found in the nearby city of Veliki Preslav (which became the new of the First Bulgarian Empire after Pliska in 893 AD) recently celebrated the 40th anniversary since its discovery.

“[This gold earring] is ornate and decorated with the very complex technology of granulated decoration. It is similar to some of the known pendants from the Preslav Gold Treasure,” Aladzhov says.

Right next to the bolyar (boyar) residence, the archaeologists have exposed the dugouts used by their servants, in stark contrast to the nobility’s dwelling boasting running water.

“Sure, there is a contrast but I must point out that these dugouts here are markedly different from the average dugout [from that period] that we know. Because these dugouts that we see are all plastered with stone on the inside, they have stone walls, with stones arranged on the inside, they have well pronounced entrances with stairs, and each dugout has a stone stove,” the lead archaeologists explains.

One dugout nearly attached to the bolyar’s residence has been dubbed a “kitchen”; it still contains ashes from the fire for the last meal cooked at the site.

“We joking call this the “bread oven” but it does contain the foundations for mill stones that were used to grind the wheat to make flour for bread.

The bolyar’s residence found in the newly discovered satellite town of the early medieval Bulgarian capital Pliska occupies the highest point from the site, and offers a controlling view over the entire settlement and a wide valley including two nearby rivers.

Aladzhov points out that a total of seven previously unknown medieval settlements from the time of the First Bulgarian Empire have been discovered already in the area only thanks to the rescue digs in the narrow strip of land for the construction of the Turkish / Balkan Stream gas pipeline.

“This is absolutely unexpected for us. In fact, [it is unexpected] that the entire valley of Belogradets with its numerous [newly found] medieval sites. Just within the strip for the pipeline we have registered and researched seven sites. You can imagine that there must be many more outside it. That means that this was a densely populated are in the 8th – 10th century, in the Early Middle Ages, and our knowledge about the region of Pliska has been expanded a lot,” the archaeologist elaborates.

“Up until now, we thought that Pliska had two satellite settlements, so to say, the Kabiyuk fortification and the Stan fortification. But here, very close to Pliska, some 10 kilometers away, we are finding are entirely unknown such settlement center,” he adds.

The Belogradets settlement appears very identical to Pliska not just in terms of urban planning but also because the area’s topography is very similar to that of the Ancient Bulgar capital.

“We can state that we have found a new satellite settlement of the First Bulgarian capital Pliska which flourished into a rather rich settlement in the 10th century. At the beginning of the 10th century, Pliska also started seeing the growth of bolyar’s estates with their own fortress walls where rich people would reside inside stone buildings. We are seeing the same thing here,” Aladzhov declares.

He points out the model in which dugouts, apparently for the service staff, are found almost adjacent to the stone buildings in the newly discovered early medieval town. The dugouts found there, however, are also notable for their large size considering that regular dugouts from the period are usually about 2.5 meters wide.

“The presence of dugouts is understandable because that was the dwelling that would protect you best in the bad atmospheric conditions of this field. During the winter, it gets really cold and windy here, and when you are “dug in” the ground, that is a natural shelter, and the soil itself helps preserve the heat,” Aladzhov says.

Among the other finds, the archaeologists have discovered numerous fragments from amphorae in the newly found of Pliska’s satellite towns leading to the conclusion that the locals might have been dealing with wine making.

Numerous arrow tips from both military and hunting arrows have also been found.

“We have found many arrows. There may have been many attacks; we know that after the second half of the 10th century this area was frequently attacked by the Magyar tribes,” the lead archaeologists says.

He does note, however, that the settlement was abandoned peacefully by its residents, not unlike Pliska, which was not the capital of the Bulgarian Empire any more towards that time.

The First Bulgarian Empire was subjugated by Byzantium in 1018 AD for a period of more than 150 years.

“This town was abandoned for the same reasons why Pliska was abandoned at the beginning of the 11th century. These were the nomadic tribes which started invading from the north so the population had to hide in mountain fortresses [in the Balkan Mountains to the south],” Aladzhov says, still emphasizing the great source of information about the early medieval period that the researchers have found with the discovery of Pliska’s third known satellite town.