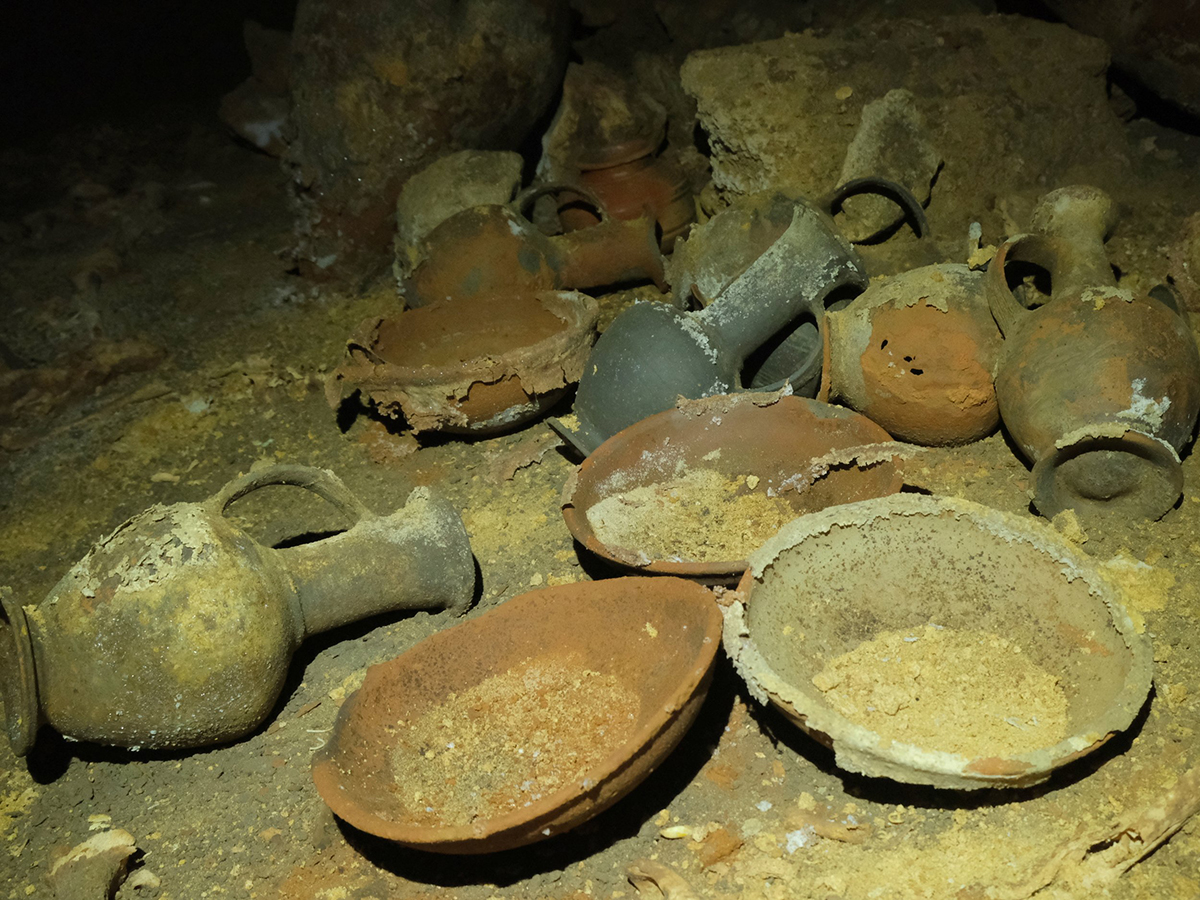 In a cave in the Palmahim Beach National Park

The cave, exposed by a mechanical digger during development works, was accessed for the first time since it was sealed at the time of Rameses II. The artifacts lay on the cave floor as they were laid out in the ancient burial ceremony. Israel Antiquity Authority archaeologists: “A once-in-a-lifetime discovery.”

An exceptional and amazing discovery from the time of Rameses II, the Pharaoh associated with the Biblical Exodus from Egypt, was revealed last Wednesday when a mechanical digger penetrated the roof of a cave in the Palmahim Beach National Park, in the course of the Israel Nature and Parks Authority development works. Dror Sitron, Israel Antiquities Authority inspector, was the first to discover the cave.

The Israel Antiquity Authority archaeologists mobilized to the site and descended a ladder into the astonishing space that appeared to have frozen in time. The hewn cave was square in form with a central supporting pillar. Several dozens of intact pottery and bronze artifacts were laid out in the cave, precisely as they were arranged in the burial ceremony about 3,300 years ago. These vessels were burial offerings that accompanied the deceased to believe they would serve the dead in the afterlife.

According to Dr. Eli Yannai, Israel Antiquities Authority Bronze Age expert, “This is a once-in-a-lifetime discovery! It is extremely rare to come across an ‘Indiana Jones film set”—a cave floor laid out with vessels untouched for 3,300 years, since the Late Bronze Age, about the time of the powerful King Rameses II. The fact that the cave was sealed, and not looted in later periods, will allow us the employ the modern scientific methods available today to retrieve much information from the artifacts and the residues extant on the vessels, for example. These organic remains are not visible to the naked eye. The cave may provide a complete picture of the funerary customs of the Late Bronze Age. The cave predominantly contains tens of pottery vessels of different forms and sizes, including deep and shallow bowls, some red-painted, footed chalices, cooking pots, storage jars, and lamps for lighting.”

Dr. Yannai considers that some of the storage jars were manufactured along the coast of Syria and Lebanon. Additional smaller vessels, mainly jugs, and juglets, used to store and trade smaller quantities of expensive commodities, were imported from Tyre, Sidon, and other ports along the Lebanese coast. In contrast, other pottery vessels came from Cyprus. These vessel types were imported in large quantities and were popular burial goods.

In addition, bronze arrowheads or spearheads were found in the cave; based on how they lay, they were probably in a quiver made of no longer extant organic material.

“The finds in the cave date to the thirteenth century BCE (Late Bronze Age IIB),” says Dr. Yannai. “In this period, in the long reign of the Nineteenth Egyptian Dynasty Pharaoh Rameses II, the Egyptian Empire controlled Canaan, and the Egyptian administration provided certain conditions for extensive international trade. These economic and social processes are reflected in the burial cave that contains pottery vessels imported from Cyprus and from Ugarit on the northern Syrian coast, as well as from nearby coastal towns, including Yafo (Jaffa), Ashdod, Ashkelon, Gaza, and Tel Ajjul, clearly showing that the population of Yavneh-Yam (Palmahim Beach), played an integral part in the lively trading activity that took place along the coast.”

Once discovered, the burial cave was sealed and guarded, but it is evident that it was disturbed by one looter or more, who stole some vessels; this is now under investigation.

According to Eli Eskosido, Director of the Israel Antiquities Authority, and Raya Shurky, the Director of the Israel Nature and Parks Authority, “The discovery in the Palmahim National Park is unique and absolutely astonishing! The news of the discovery of the cave spread like wildfire in the academic world, and we have already received requests from many scholars to participate in the planned archaeological excavation. Unfortunately, despite the guard setup, a few items were looted from the cave before it was sealed up, an issue that is now being investigated. Within a few days, we will formulate a plan to carry out the research and the protection of this unique site, which is a feast for the archaeological world and the ancient history of the land of Israel.”