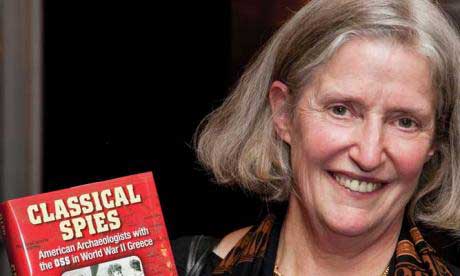 Archaeologist Spies: the Truth behind the Myth

Archaeologist Spies: the Truth behind the Myth

A unique perspective on an untold story, the first insiders’ account of the American intelligence service in WWII Greece. Archaeologists in Greece and the eastern Mediterranean drew on their personal contacts and knowledge of languages and terrain to set up spy networks in Nazi-occupied Greece. While many might think Indiana Jones is just a fantasy character, American archaeologists with code-names like Thrush and Chickadee took part in events where Indy would feel at home: burying Athenian dig records in an Egyptian tomb, activating prep-school connections to establish spies, and organizing parachute drops into Greece. These remarkable men and women, often mistaken for mild-mannered professors and scholars, hailed from America’s top universities and premier digs, such as Troy and the Athenian Agora, and later rose to the top of their profession as AIA gold medalists and presidents. Relying on interviews with individuals sharing their stories for the first time, previously unpublished secret documents, diaries, letters, and personal photographs, Susan Heuck Allen shares an exciting new angle on archaeology and World War II.