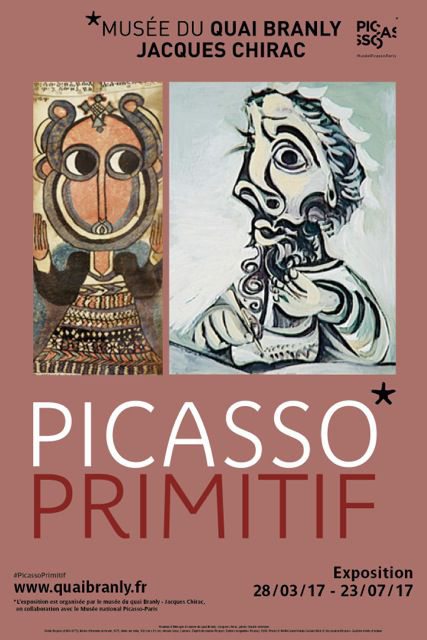 What links did Picasso maintain with non-Western arts? This question, frequently addressed, was however avoided by the artist himself for a long time. This exhibition aims to decipher a relationship born of admiration, respect and fear.

The exhibition “Primitive Picasso” opens at the Musée du Quai Branley Jacques Chirac on March 28, 2017. The show will run through July 23, 2017.

“Negro art? Don’t know it.” It was with this provocative tone that the Andalusian painter, sculptor and graphic artist made a point of denying his relationship with non-European art. However, and as his personal collection demonstrates, the arts of Africa, Oceania, the Americas and Asia never ceased to accompany him in all his various studios. The documents, letters, objects and photographs brought together in the first part of the exhibition and displayed chronologically, are evidence of this, demonstrating Picasso’s interests and curiosity about non-Western creation.

In a second, more conceptual section, Primitive Picasso offers a comparative view of the artist’s works with those of non-Western artists, and leans more towards an anthropology of art than an analysis of aesthetic relationships. The resulting confrontation reveals the similar issues those artists have had to address (nudity, sexuality, impulses and loss) through parallel plastic solutions (deforming or deconstructing bodies, for example). Primitive art, therefore, is no longer considered to be a stage of non-development, but rather an access to the deepest, most fundamental layers of the human being.

The exhibition is organized by the musée du quai Branly – Jacques Chirac, in collaboration with the Musée National Picasso-Paris.