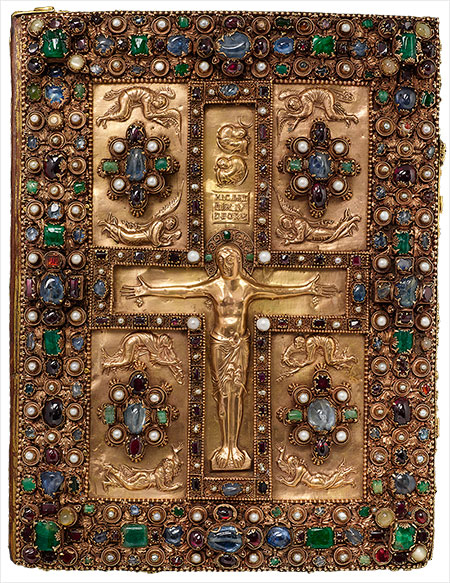 Treasure bindings—book covers encrusted with gold, silver, and gemstones—were a luxury in the Middle Ages. Few survive, and some of the finest examples are in the Morgan’s distinguished collection. Magnificent Gems: Medieval Treasure Bindings presents these masterpieces in context for the first time. The treasure bindings on view include star sapphires, diamonds, emeralds, pearls, and garnets, alongside illuminated manuscripts and printed books that depict two-dimensional representations of these precious materials.

Among the exhibition highlights will be the ninth-century Lindau Gospels, one of the two finest Carolingian jeweled bindings in the world, and the thirteenth-century Berthold Sacramentary, the most luxurious German manuscript of its time. In these and other examples, we learn that the application of gemstones and precious metals served to venerate the texts inside and embellish church services, as well as reflect the status and wealth of the patrons who commissioned them.

Images of “imagined” gems are also featured on the pages of manuscripts and printed books presented, including three examples of Venetian books, hand-painted by Girolamo da Cremona.  The artist’s frontispieces to Augustine’s City of God (1475), Plutarch’s Parallel Lives (1478), and Aristotle’s Opera (1483) are masterpieces of trompe-l’oeil. The last has been called the “most magnificent printed book in the world.”

Magnificent Gems: Medieval Treasure Bindings is made possible by Caroline S. Bacon, Elizabeth A. R. and Ralph S. Brown, Jr., Salle Werner Vaughn, and other members of the Visiting Committee to the Department of Medieval and Renaissance Manuscripts, the B. H. Breslauer Foundation, and Susanna Borghese.

The exhibition will run through January 7, 2018.