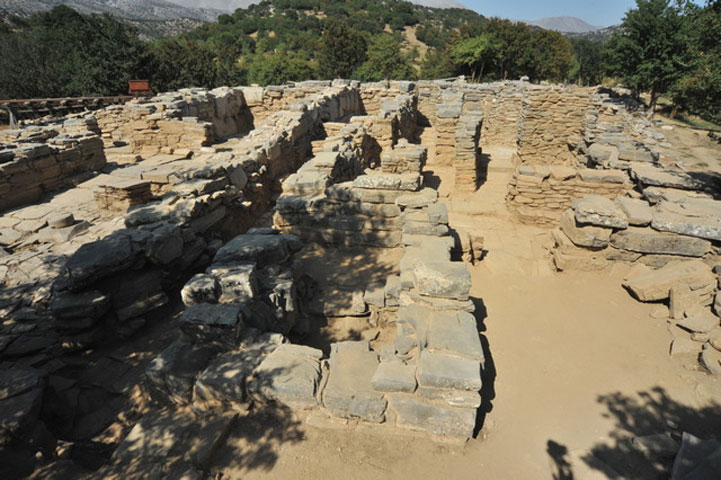 New impressive entrances were discovered in the Minoan palace of Zominthos on Psiloritis Mountain (Mount Ida) during this year’s six week excavation (July-August) by the Honorary Ephor of Antiquities, Dr Efi Sapouna-Sakellarakis. New data also emerged on the interior layout of the complex and its architecture (stairways, rich decoration), while there were numerous finds from the research conducted on the interior and its rooms, among which a particularly rare coin of the Mark Aurelius era (161-180 AD). All evidence suggests the importance of this huge, labyrinth like building situated at an altitude of 1,200 meters, establishing views as to its character.

There are two entrances, of which the first in the north east corner is particularly carefully constructed, featuring an anteroom with two benches on either side. This entrance leads via a large corridor to an important sanctuary on the east wing, where a stepped altar and pit have already been discovered.

During the excavation the entrance to the south east corner was also located, which unfortunately is badly preserved, having been subjected to many modifications in subsequent years (Mycenaean and Roman) but also to great damage due to the looting of antiquities in the 1960s. It appears however to have been very grand, leading to a central courtyard by steps that start from the lowest level of the hill on which the palace is built. Nevertheless, both entrances are different from that of the main north entrance, which architecturally is less complicated.

One more interior stairway was discovered during the excavation, while the walls, some of which survive up to a height of three meters, prove that the building was a multi-storey one. Its large halls supported the upper floors with central pillars or columns. The floors, which came to light this year, some of bright limestone and others pebbled, indicate the luxury that prevailed inside the palace, as do the frescoed walls of mortar that adorned the rooms, a sample of the sophistication of the era and its inhabitants.

In a luxurious area above the metal craft workshop, the following artefacts came to light: seals, one of which depicting a sacred knot, had fallen from the floor above, pendants such as the one shaped like a shell, a drinking cup/rhyton decorated with spirals and part of a vase with relief decoration of a small pig. A rhyton has been found in Bronze Age sanctuaries, such as that in Phaestos and is associated with the later cult of the Cretan Zeus. Besides, a ritual vase (rhyton), shaped like a pig, has already been found in Zominthos.

In an adjoining room, the stone cases that came to light would have contained precious objects which the tenants obviously took with them, leaving behind them a handful of remains, such as a small bronze scarab, a local imitation of its Egyptian original, a seal and many non-edible sea shells, that show that a sea deity was worshipped in the region, as we already know from Knossos. Moreover, a great number of vases were found in a deposit in the same room.

During this year’s excavations, bronze objects such as daggers were also discovered, stone vessels, seals, a bone tile resembling those that decorate the famous zatrikion board game of Knossos, sections of large jars and clay vessels, ceramic wheels as well as remains of beehives. The latter show that the inhabitants also practiced beekeeping, apart from exploiting the rich flora and fauna of Psiloritis Mountain. Thus there is evidence of the breadth and character of the activities of the palaces’ inhabitants, which were of course of an economic, political and religious nature. The palace’s connection, on the one hand, with Knossos- the first settlement in Zominthos in 1900 B.C. almost coincides chronologically with that of Knossos- and on the other, with Ideon Andron, Crete’s most significant and possibly earliest sanctuary, shows its great importance. This is certainly the main reason that the conquerors of the island, the Mycenaeans initially followed by the Romans, wished to exploit it to the full.

Finally, great numbers of pieces of rock crystal, originating from the workshop of the complex, were located all over the premises. Some of these, in fact, had been worked on since they were to be inlaid in wooden utensils.

This year, work also continued in the metalwork furnace, revealing new constructions.  Besides, in different parts of the building, rocks rich in iron were found and examined by specialists of the Foundation for Technological Research.

It should be noted that the palace of Zominthos was located and part of it excavated by Yannis Sakellarakis in the 1980s. The last period of systematic excavations began in 2004 and continues.