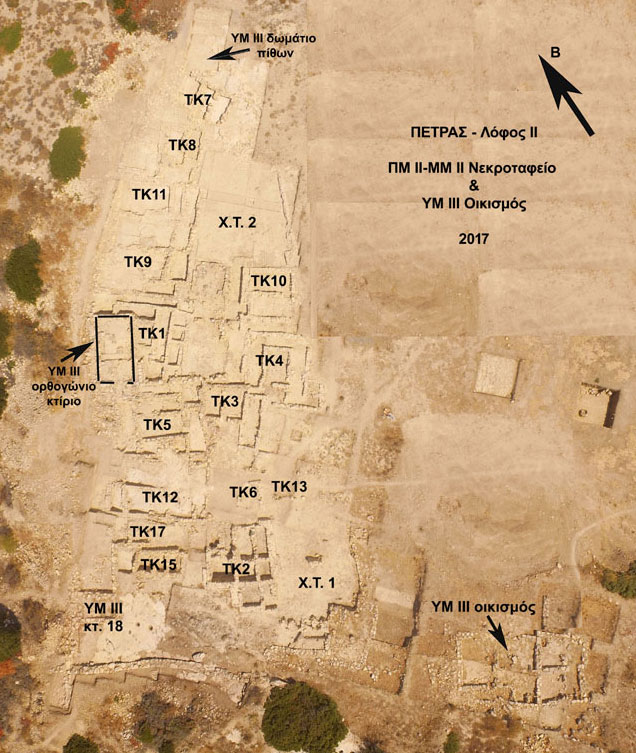 View of the excavation at Petras. Photo: Ministry of Culture and Sports
News: Excavation
Unique finds have come to light at Petras in Siteia
Dr Metaxia Tsipopoulou is head of the excavation
by Archaeology Newsroom - Monday, 25 September 2017

For the 12th year in a row, the excavation of the unplundered prepalatial and protopalatial Minoan cemetery at Petras in Siteia (2800-1800 BC) has continued with spectacular results, under the direction of Dr Metaxia Tsipopoulou, Honorary Director of the Ministry of Culture and Sports.

Petras is being excavated and studied by an interdisciplinary team of 26 individuals from 9 countries. To date, 17 large funerary buildings have been excavated (with an area as large as 125 sq.m.), a rock shelter burial site, three pits and two extensive areas for rituals, that had been erected and used by prominent families in the palace settlement. The burials are secondary, the primary ones being only seven.

The quantity and preservation of the skeletons is unique, as well as the variety of grave goods, many of which are luxuriously made of imported raw materials. Indicatively mentioned are large numbers of gold and silver jewelry, many bronze tools, particularly for cosmetic purposes, more than 200 stone vessels, over 65 seals made of ivory and semiprecious stones and two signet rings. There is also a considerable number of ceramics which include a quantity of decorated vessels, particularly for rituals. This year’s excavation concentrated mainly on EM II and MM II burial assemblages which produced new ivory seals, unique gold jewelry, beads made of gold and semiprecious stones, as well as stone vessels and figurines with multicoloured decoration in the Kamares style.