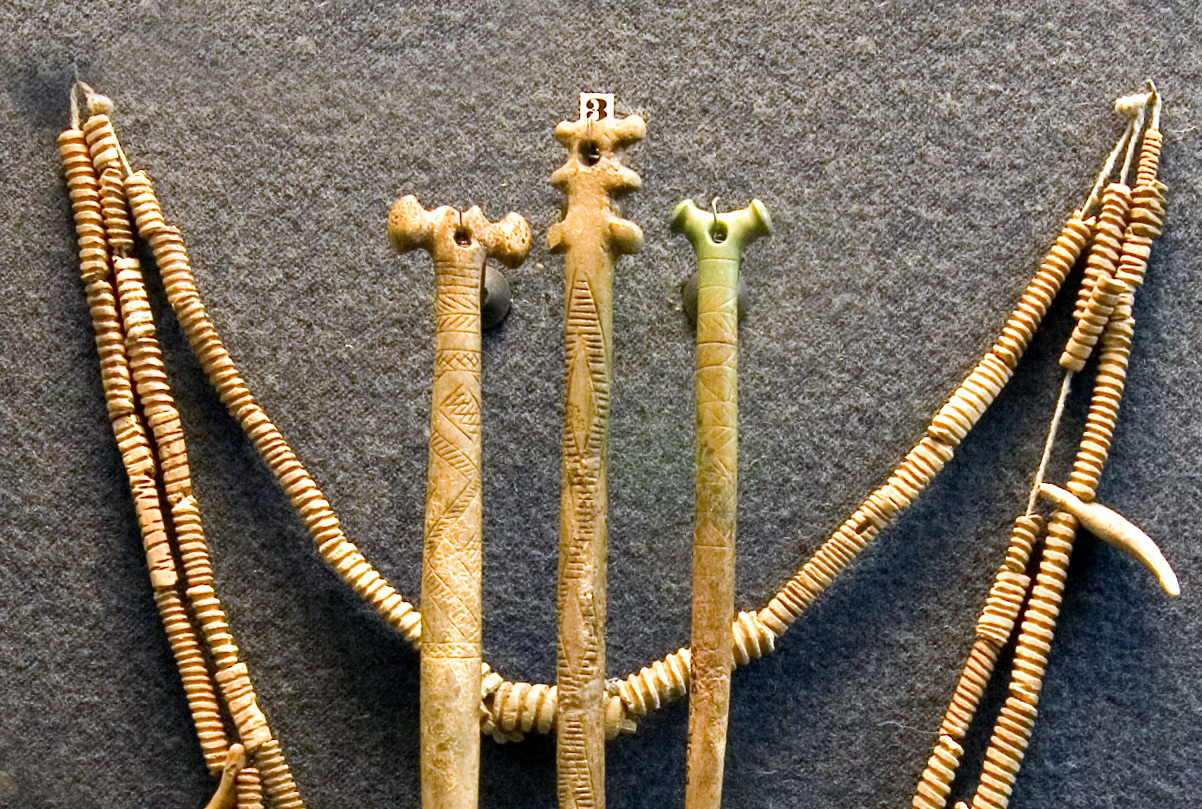 Ornaments and items of adornment in bone and canine by the Yamna culture.
News: Linguistics
Scandinavia’s earliest farmers exchanged terminology with Indo-Europeans
The Proto-Indo-European language
by Archaeology Newsroom - Monday, 2 October 2017

5,000 years ago, the Yamnaya culture migrated into Europe from the Caspian steppe. In addition to innovations such as the wagon and dairy production, they brought a new language – Indo-European – that replaced most local languages the following millennia.

But local cultures also influenced the new language, particularly in southern Scandinavia, where Neolithic farmers made lasting contributions to Indo-European vocabulary before their own language went extinct, new research shows.

Most historical linguists agree that words such as ‘wheel’, ‘wagon’, ‘horse’, ‘sheep’, ‘cow’, ‘milk’ and ‘wool’ can be attributed to the Yamnaya people who migrated into Europe from the Caspian steppe 5,000 years ago. The nomadic and pastoral Yamnayans introduced their material culture to the local peoples through a new language known as Proto-Indo-European, from which most European languages descend.

However, not all words in the European languages are of Proto-Indo-European origin, linguists say; there are words for flora and fauna, which must have been incorporated into Indo-European from local cultures. But where could such cultural exchange have taken place? According to a new study published in American Journal of Archaeology by archaeologist Rune Iversen and linguist Guus Kroonen from the University of Copenhagen, southern Scandinavia 2,800 BC provides an ideal setting for such an exchange:

“The archaeological evidence tells us that between 2,800 and 2,600 BC two very different cultures co-existed in southern Scandinavia: there was the local, Neolithic culture known as the Funnel Beaker Culture with its characteristic funnel-shaped ceramics and collective burial practices and the new Single Grave Culture influenced by the Yamnaya culture. The Funnel Beaker Culture was eventually superseded by the Single Grave Culture, but the transition took hundreds of years in the eastern part of southern Scandinavia, and the two cultures must have influenced each other during this time, “says archaeologist Rune Iversen, who has specialised in this particular transitional period.

Historical linguist Guus Kroonen points to a number of words for local flora and fauna and important plant domesticates that the incoming speakers of Indo-European could not have brought with them to southern Scandinavia.

“There is a cluster of words in European languages such as Danish, English, and German – the Germanic languages – which stand out because they do not conform to the established sound changes of Indo-European vocabulary. It is words like sturgeon, shrimp, pea, bean and turnip that cannot be reconstructed to the Proto-Indo-European ancestor,” Guus Kroonen explains and adds:

“This tells us that these words must have entered Indo-European after it had spread from the Caspian steppe to the various parts of Europe. In other words: the new Single Grave Culture is likely to have adopted much farming and hunting terminology from the local Funnel Beaker Culture that inhabited southern Scandinavia and Denmark till around 2,600 BC. When Indo-European in Northern Europe developed into Proto-Germanic, the terminology for local flora and fauna was preserved, which is why we know and can study the terms today.”

Guus Kroonen adds that this farming terminology may be vestiges of a now extinct language spoken by the people who initially brought farming to Europe from Anatolia 9,000-6,000 years ago.