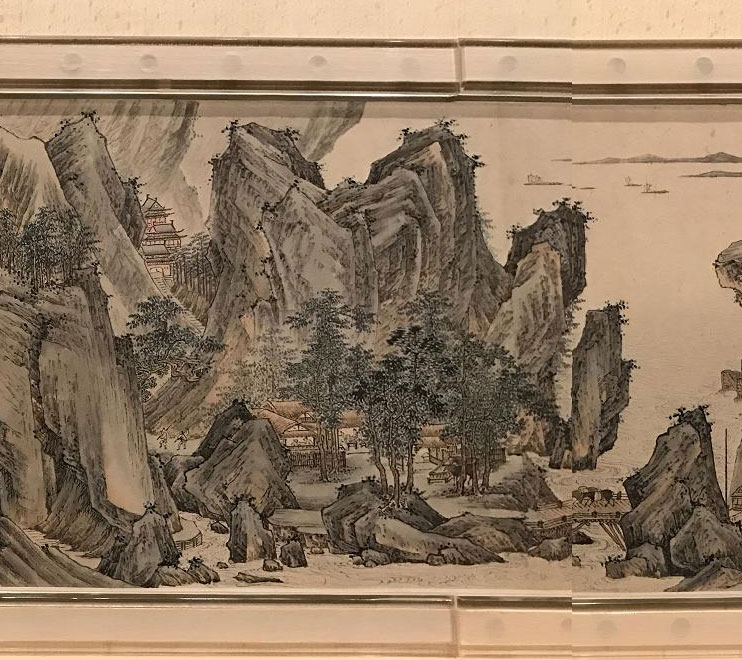 A bronze ritual basin and the painted scroll “Travelling along the Clear River” make up the works exhibited by the Acropolis Museum in honour of October 28. At the same time, entrance both to the museum and the temporary “Emotions” exhibition will be free.

The collabo0ration with the Shanghai Museum

The exhibition “Treasures from the Shanghai Museum” (October 28, 2017–April 30, 2018) realizes part of the targets set by the Memorandum of Cooperation signed by the two museums. Α corresponding activity will be realized at the Shanghai Museum (January 11- April 8, 2018) with the display of two masterpieces from the Acropolis Museum; the marble statue of the archaic Kore no 670 (520–510 BC) and the lid of a red figure lekanis (low bowl) depicting a Dionysian scene (350–325 BC). These two events are the first of many steps to be made as part of the agreement in cultural exchanges between the two Museums.

The Shanghai Museum was founded in 1952 to house works of ancient Chinese art. One hundred and forty thousand objects, out of one million art works comprising its collections, have been classified as national treasures. The collections of the Shanghai Museum cover a wide range, from the Neolithic period to the start of the 20th century, and twenty one categories of exhibits ,such as bronze, ceramic and calligraphy work, paintings, works of jade and ivory, utensils of bamboo and lacquered wood, seals, coins, bones for predicting the future and artefacts of  national minorities. The collections of bronzes, ceramics, calligraphy and painting are among the best in the world. Masterpieces and treasures of the museum have been exhibited in many countries across the world, while each year the museum itself welcomes over two million visitors.

The first work of art to be hosted by the Acropolis Museum as part of the event ‟Treasures from the Shanghai Museum” is a bronze ritual basin of the 7th c B.C. It had been made for the princess Zi Zhong Jiang and used as a water vessel for the washing of hands before rituals and banquets. The basin’s innovative design with stylized animal motifs and figurines, unique among the bronze utensils of the period, makes this artifact from the Shanghai Museum a truly rare masterpiece of Chinese bronze work.

The second work of art is a painted paper scroll by the Chinese painter Wu Hong of the Qing Dynasty (17th c. BC) entitled “Travelling along the Clear River”. The scroll depicts a peaceful scene with mountains, rivers, farm houses, pavilions, bridges, boats and human figures among them, describing an ideal world or a paradise which in Chinese is called shi–wai–tao–yuan. The artist’s subtle, precise brushstroke gives unique value to this work, where emphasis is given to the realistic rendering of a landscape which one can  see ,walk around in and experience.

The two objects of the exhibition “Treasures from the Shanghai Museum” will be displayed on the ground floor of the Acropolis Museum, from October 28, 2017 to April 30, 2018.

Visitors can watch the information video screened repeatedly in the same area as the two exhibits and also read the small brochure with information on the exhibition, available free of charge in Chinese, Greek and English.

In the Museum Shops there will be a large brochure with information on the exhibition in Chinese, Greek and English.