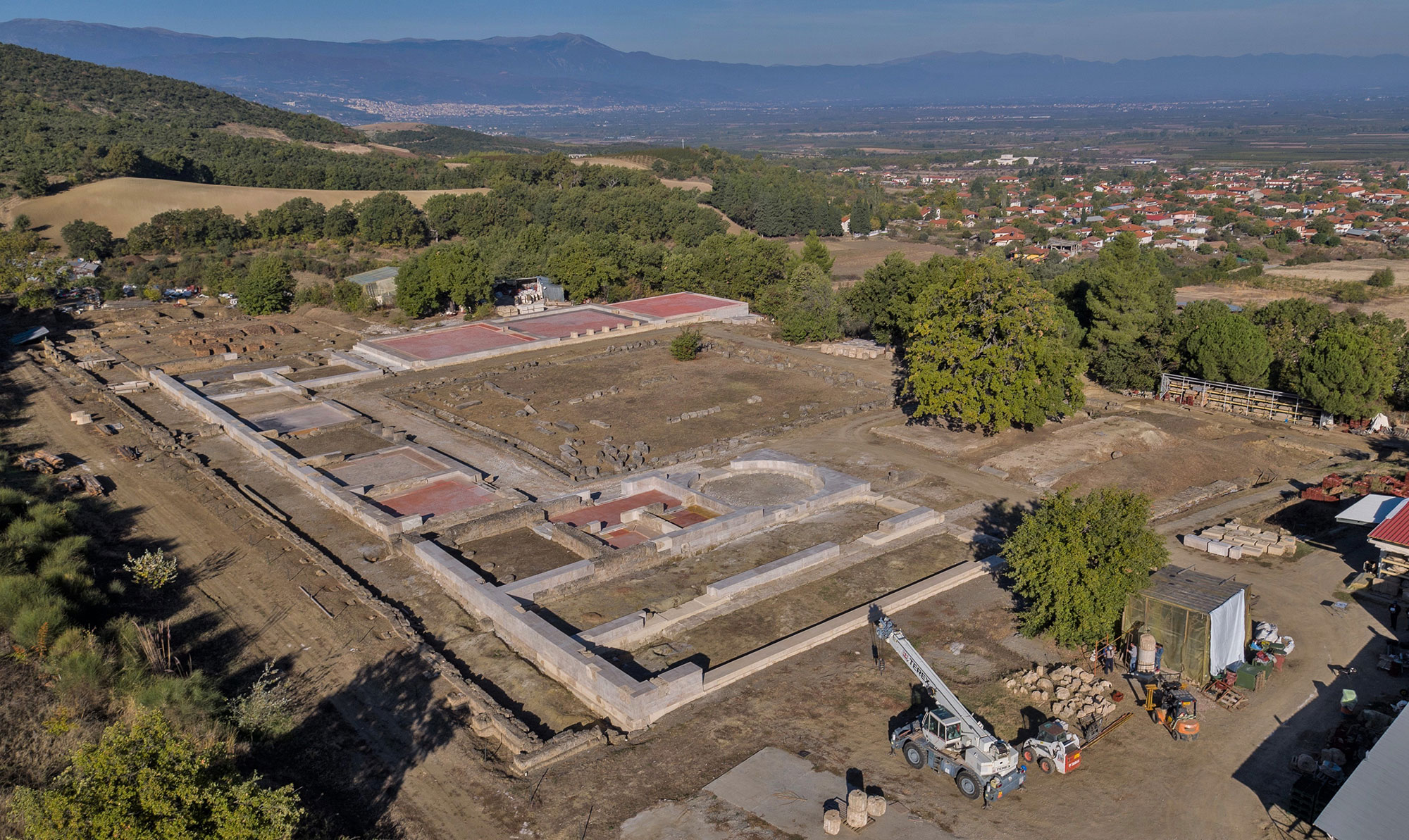 On the north slopes of the Pierian mountains, where the ancient city of Aigai, the royal capital of the Macedonians, once prospered, the constant singing of nightingales is being interrupted by the harsh sound of the chisels of the masons who shape stones the way their ancient ancestors did. Tens, hundreds of stone plinths await in rows to take the appropriate shape. In the end there will be a few thousands of them and as soon as the great restoration work of the palace of Philip II is done they will find their place.

This is how the preserved parts of the huge retaining wall (measuring 104m in length, 2.1m in width and 9-15m in height) will be filled in. This is how the soil slippage of the slope will stop and the risk of a landslide and a definitive loss of everything remaining of this magnificent palace will be averted, as described by archaeologist Angeliki Kottaridi, also head of the Antiquities Ephorate in the region of Imathia. A few days before the opening of the palace of Aigai to the public she said that every day a growing number of shards find their place in this huge puzzle!

“The parts of the stone plinths of the retaining wall which broke when in the 1st c. AD a massive landslide urged the inhabitants to abandon the city of Aigai once and for all, are being cleaned, identified and assembled. The beautifully carved stones are regaining their ancient appearance.

“The epistyles, the Doric frieze and the architraves of the south side of the Great Peristyle are still lying where they were found on the day of the final destruction – in that same place where centuries ago Alexander was proclaimed king of the Macedonians. There they are patiently awaiting the moment when they will be lifted again to give something of that ancient aura to the biggest and definitely one of the most significant buildings of Classical Greek architecture.

“Day after day more and more columns obtain their shape. Links and order is found within groups of two, three, even four drums. The columns, not anymore as plain drawings on paper but as volumes in space are gradually regaining their form out of their ancient stone drums giving the team opportunities to celebrate”, Mrs. Kottaridi says.

The public will be able to see all this for the first time in a few days, as on Sunday, June 3rd, from 10.30 am until 1.00 p.m. there will be an open guided tour of the palace by the head of the Ephorate. From June 4th, the palace will be visitable, at free admission, as the restoration work is still in progress.

Opening hours for the public will be from Monday till Friday, 10.00 am – 14.00 p.m., while on weekends the monument will stay closed. Visitors will reach the palace site on foot, thus having the chance to walk through the west part of the city of Aigai and get a picture of the dimensions and the topography of the city.

Accessible to the public will be the better preserved south side of the building, where the main part of the restoration works has been completed and the most interesting mosaic floors are to be found. Thus visitors who are truly interested in monuments will have the chance to see the building which has reflected the idea of the enlightened hegemony. The same building has become the archetype of all public buildings of the Hellenistic Ecumene. At the same time they will be able to have a look at the restoration works.