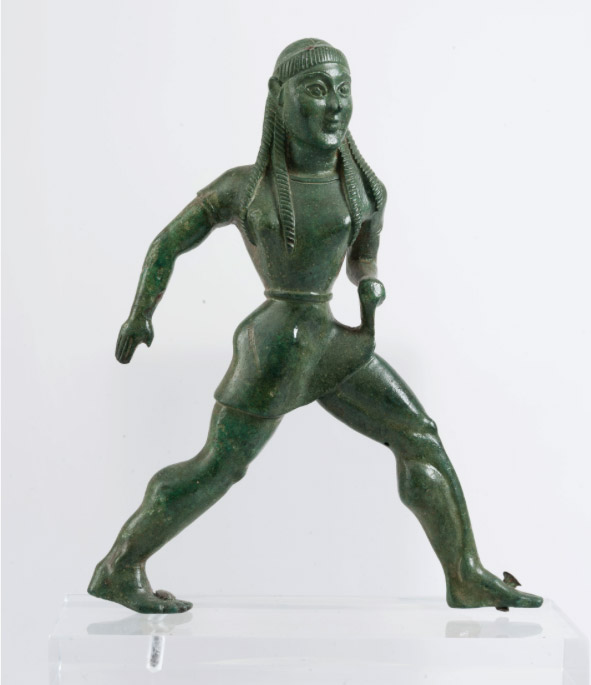 Βronze statuette of a girl runner (Κar. 24) – Big case of the Sanctuary of Dodona n.5. Α young girl is depicted, participating in the races for maidens held at Olympia. The games were held every four yearsin honour of the goddess Hera. The victor received an olive wreath and pieces from the animal sacrificed to the goddess. 550-540 BC.
News: National Archaeological Museum
Celebrating the Authentic Marathon at the National Archaeological Museum
From Monday 5th to Monday 12th of November
by Archaeology Newsroom - Friday, 2 November 2018

The idea of supreme competitive effort of humans to make their body more capable and by the power of the mind invent various techniques was the principal characteristic of athletics. In ancient Greece the athletics and the various contests were interwined with their lives, legends, religion and their awareness of being Greek. Athletes are people who specialized in one or more sporting events as well as members of a society which over the course of time can turn rivalty into virtue.

The National Archaeological Museum celebrating the forthcoming Authentic Marathon in Athens on 11th November 2018 and the idea of competitive effort has organized a thematic tour about sports and athletes in antiquity. By means of a special educational leaflet (in English) available at the entrance of the Museum from Monday 5th to Monday 12th of November, athletes participating in the authentic marathon will be able to stroll through the galleries of the Museum and get acquainted with a series of exhibits related with sports and athletics (e.g. training for athletes, races, prizes).

The entrance to the Museum is free for the first 100 athletes that will ask for the educational leaflet at the Information Desk of the Museum, upon presenting their participation number for the Marathon.