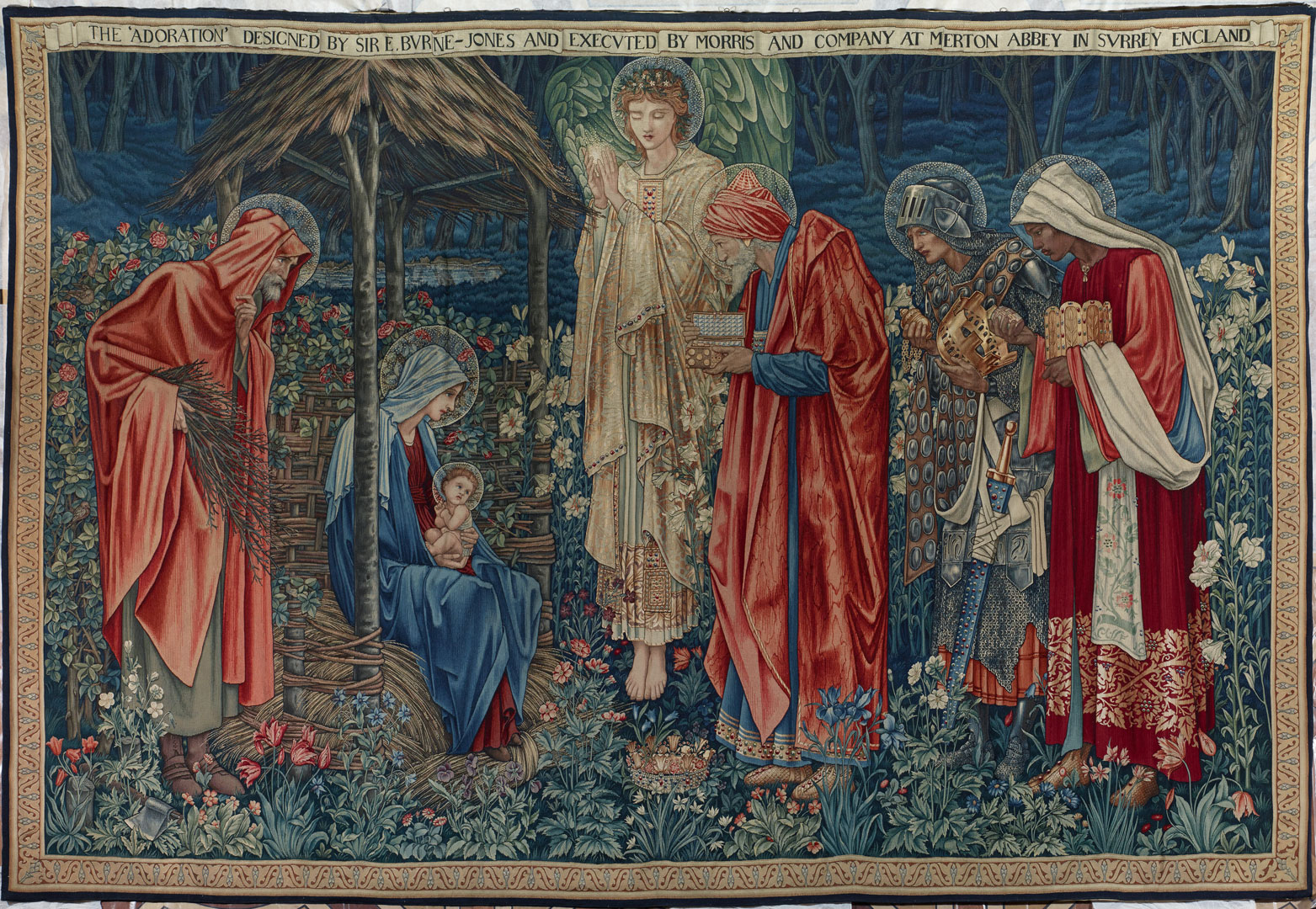 The exhibition “Nineteenth- and Twentieth-Century Tapestries in the Hermitage Collection” is on view since September 18 in the Halls of the Art Nouveau in the General Staff building of the Hermitage Museum. The museum is displaying for the first time a collection of tapestries from this period, in which the works of French artists predominate.

The exhibition contains twenty pieces that represent European tapestry weaving belonging to such artistic tendencies as Historicism, the Art Nouveau and Modernism. Visitors will be seeing many of them for the first time or else after a long interval. Some came into the museum from the collection of the imperial family and once adorned the Winter Palace, others came from private collections in Russia. In recent decades, some tapestries of interest to the museum have also been acquired, including the first tapestry by Jean Lurçat in the Hermitage’s stocks – Blaze of Fire.

A crisis in the sphere of tapestry-weaving at the turn of the 19th century led to a considerable reduction in the volume of such interior adornments in Europe. The leading manufacturers were obliged to reassess centuries of experience and try to develop a new form of tapestry that would fit successfully into interiors in the Empire style and others that followed. The Gobelins factory, revived during Napoleon’s reign, produced virtuoso, extremely finely made tapestries that copied painted prototypes. The French tapestry factories in Beauvais and Aubusson mainly wove decorative panels for walls and screens, as well as pieces for upholstering furniture. Many workshops closed. Others completely altered their manufacturing profile, such as the Saint Petersburg Tapestry Factory, which gradually shifted to producing nothing but carpets.

Large royal or imperial factories ceased to be the only possible production facilities. Many of them were broken up into private workshops that were more flexible and responsive in their adaptation to the new market. They would appear in places that already had qualified workers, in old centres of the weaving craft.

In the second half of the 19th century, with the arrival of historicism in European art, artists and manufacturers began to revise their attitude to the role of the tapestry in an interior. It would begin making the reverse journey from the huge woven picture to its true purpose as an attractive woollen fabric embellishing and insulating the surface of a wall.

That idea was first realized in England, where in the 1860s a firm was created under the direction of William Morris that proclaimed its mission to be a return to the values and aesthetics of mediaeval crafts and a deliberate rejection of the soulless mechanicality of the industrial revolution. Morris’s enterprise produced tapestries from cartoons designed by the Pre-Raphaelite Edward Burne-Jones, who reworked the tradition of Late Gothic mille-fleurs tapestries, retaining the flatness of the composition and the fine decorativeness of details and contours. The exhibition includes the only tapestry from Morris’s workshop in Russia – The Adoration of the Magi, the watercolour design for which Burne-Jones created in 1887. Besides the Hermitage’s, nine more versions of the tapestry are known, all woven between 1890 and 1907. This work was acquired by the art collector Sergei Shchukin and until 1917 it was in the Gauguin Hall of his mansion in Moscow.

The Braquenié brothers’ firm that was active in Belgium and France at the same time as Morris’s also creatively reworked the traditions of European weaving from the 17th and 18th centuries. They produced pieces in a somewhat muted ochreous palette, giving the appearance of having already faded. In the late 19th century, the Braqueniés’ enterprise became Franco-Belgian with looms in both Aubusson and Mechelen (Malines). In 1899 the company produced 15 tapestries in the style of Boucher and Fragonard to a commission from Tsar Nicholas II. These works have an unusual arched shape as they were intended to decorate niches on the landings of the Saltykov Staircase on three floors of the Winter Palace. The compositions take the form of scenes set against a romantic landscape background – a picturesque garden with ruins that internally connects the series to make a single ensemble. In 1926 the tapestries were taken down and transferred to the Hermitage’s collection of fabrics. One piece has been lost, probably as a result of the revolutionary events of 1917, so today the Hermitage’s stocks include 14 tapestries from that Pastoral Scenes series.

At the turn of the 20th century, people in Europe were weaving tapestry wall panels in the Art Nouveau style, but they were not very numerous. The exhibition features the Seasons of the Year series that was created at the Gobelins manufactory. The cartoons for the series were created in 1910 by the artist Jules Chéret (1836–1932), who is famed for his lithographs and posters. This collaboration with a celebrated graphic artist was a fairly innovative approach that made it possible to produce tapestries in the new Art Nouveau style. The series consists of four tapestries: Winter. Holly, Spring. Roses, Summer. Ears of Corn and Autumn. Vines. They were supplemented by upholstery for furniture. The four seasons are presented allegorically in the guise of beautiful women and symbols of those times of the year. The tapestries were presented to Empress Alexandra Feodorovna by Raymond Poincaré, the President of the French Republic, during his visit to Saint Petersburg in July 1914.

At the same time as the Art Nouveau, there was another trend in tapestry-making – the copying of old prototypes, most often from the 15th or 18th centuries.

France played the leading role in the movement to revive the craft of tapestry-making in the period after the First World War. Architecture and lifestyles had changed, as indeed had the nature of the viewer and customer. All those things required textile artists to find new forms for the age-old craft of wall-hangings.

In the 1930s a group of artists appeared at Aubusson who sought a new aesthetic for 20th-century tapestries. The one who became most famous was Jean Lurçat, a painter, graphic artist, ceramist and poet who in the 1950s and ’60s produced tapestries with striking dynamic abstract compositions, expressive works with complex shades of colour, achieved in part through weaving techniques, that had a deep symbolic significance: the contest and unity between two opposing elements – fire and water, light and darkness, living and non-living nature. Many other artists worked for Aubusson as well as Lurçat, including Marc Saint-Saëns, Jean Picart Le Doux and Dom Robert. Some of the 20th century’s greatest masters also produced their own designs for tapestries –Picasso, Matisse, Fernand Léger, Le Corbusier, Georges Braque, Salvador Dali, Marc Chagall. Thanks to them, the tapestry returned from copying painting to its original function of monumentality and decorativeness.

Around the 1980s, interest in tapestries declined somewhat, leading to the closure of many large producers.

The exhibition of 19th- and 20th-century tapestries will acquaint visitors with an important branch of the textile crafts and expand the picture of fine art during that period.