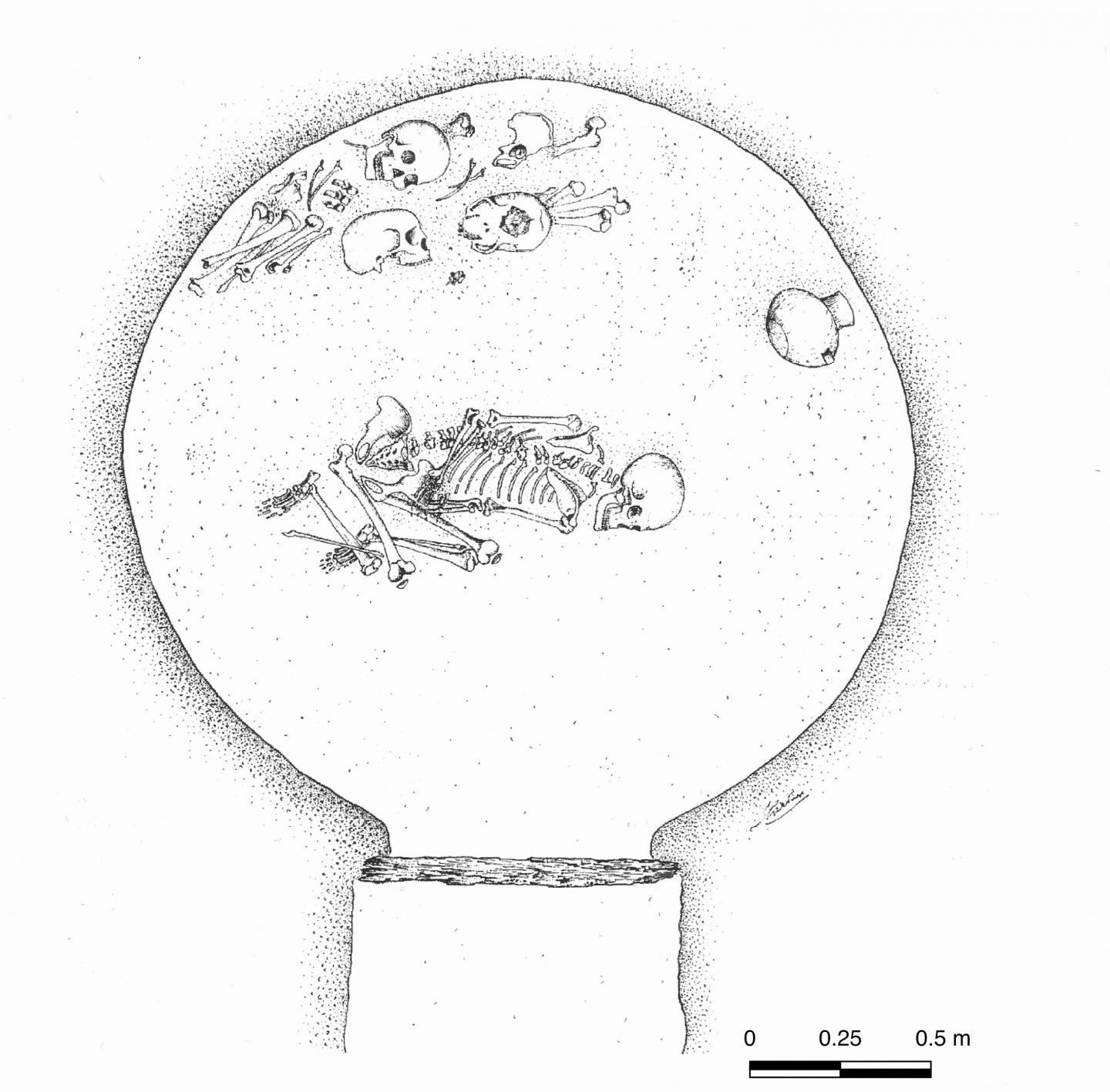 Articulated burial and dismembered human remains from Ponte San Pietro, tomb 22. The chamber tomb is typical of the Rinaldone burial custom, central Italy, c.3600-2200 BC. Reprinted from Miari 1995 under a CC BY licence, with permission from Monica Miari, original copyright 1995. Credit: Dolfini et al, 2020
News: Italy
Late Neolithic Italy was home to complex networks of metal exchange
Analysis reveals where prehistoric Italian communities got their copper, from Tuscany and beyond
by Archaeology Newsroom - Thursday, 23 January 2020

During the 4th and 3rd millennia BC, Italy was home to complex networks of metalwork exchange, according to a study published January 22, 2020 in the open-access journal PLOS ONE by Andrea Dolfini of Newcastle University (UK), and Gilberto Artioli and Ivana Angelini of the University of Padova (Italy).

Research in recent decades has revealed that copper mining and metalwork in Italy began earlier and included more complex technologies than previously thought. However, relatively little is known about metalwork exchange across the country, especially south of the Alps. In this study, Dolfini and colleagues sought to understand how commonly and how widely copper was imported and exchanged throughout Late Neolithic (Copper Age) Italy.

The researchers conducted an analysis of 20 copper items, including axe-heads, halberds, and daggers, from central Italy dating to the Copper Age, between 3600 and 2200 BC. Comparing archaeological data and chemical signatures of these items to nearby sources of copper ore, as well as to other prehistoric sites, they were able to determine that most of the examined objects were cast from copper mined in Tuscany, with the rest sourced from the western Alps and possibly the French Midi.

These results not only confirm the importance of the Tuscan region as a source of copper for Copper Age communities in Italy, reaching as far as the Tyrolean area home of the Alpine Iceman, but also reveal the unexpected finding that non-Tuscan copper was a significant import to the region at this time. These data contribute to a growing picture of multiple independent networks of Copper Age metal exchange in the Alps and neighboring regions. The authors note that future research might uncover other early sources of copper, as well as more details of the interactions between these early trade networks.

The authors add: “The first systematic application of lead isotope analysis (a geological sourcing technique) to Copper Age metal objects from central Italy, 3600-2200 BC, has shed new light on the provenance of the copper used to cast them. The research has revealed that, while some of the copper was sourced from the rich ore deposits of Tuscany, as was expected, some is from further afield. This unforeseen discovery demonstrates that far-reaching metal exchange networks were in operation in prehistoric Europe over a thousand years before the Bronze Age.”