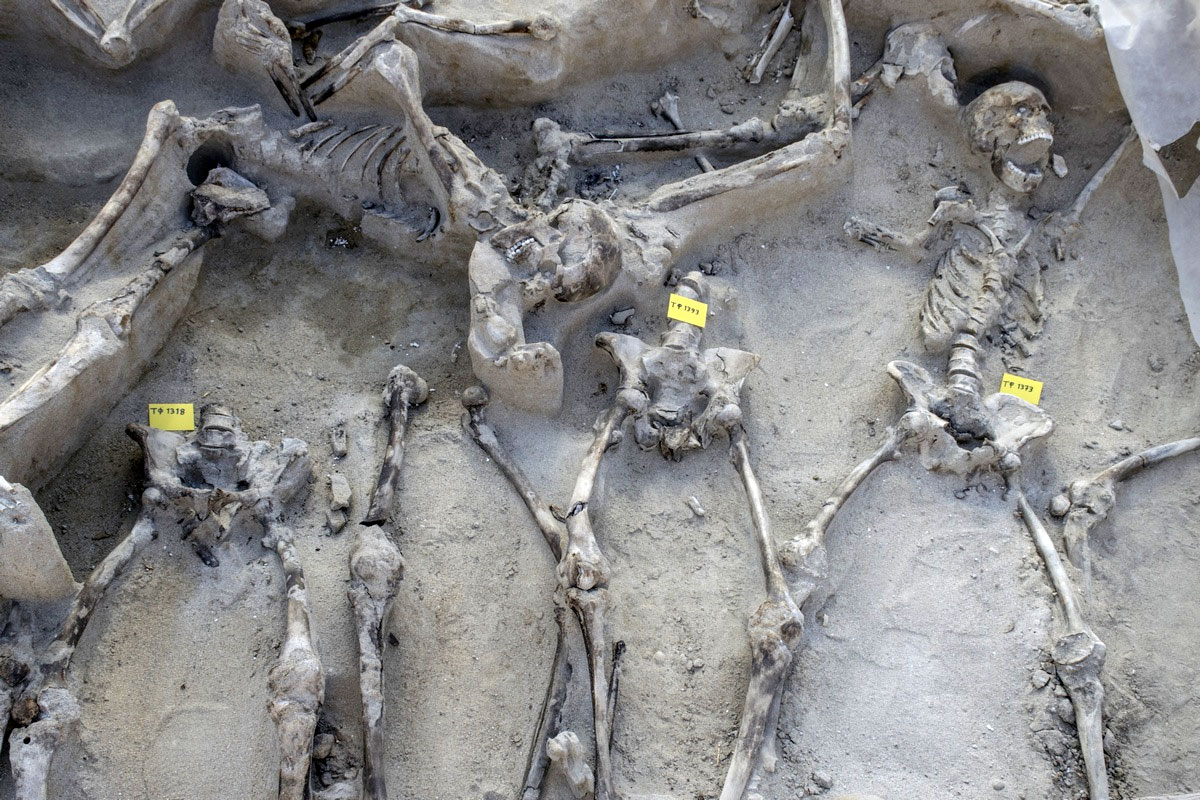 Captives of Phaleron, 2016. Row 1a (detail). Photo: Ministry of Culture and Sports
News: Greece
The Captives of Phaleron abandoned to their fate said Lina Mendoni
She requested that the find be referred to the Central Archaeological Council
by Archaeology Newsroom - Tuesday, 28 January 2020

In a meeting with the officials of the Ministry of Culture and Sports and in the presence of the General Secretary of Culture G. Didaskalou, Minister of Culture and Sports Lina Mendoni requested that the finding of the Captives of Phaleron be referred to the Central Archaeological Council. ‟The picture presented by the excavation of the Captives is extremely unpleasant. The responsibility is enormous. The Ministry of Culture and Sports is being slandered because of some fixed ideas. The finding that aroused the interest of the international scientific community has been abandoned to its fate. It is the result that counts and what we have is negligence. We are fully responsible both for what we do and what we don’t do.  There have been substantial omissions since 2016 and the finding is in a critical state.

‟The mass burial consists of 79 skeletons in three rows. A tent was used for their protection, supposedly for one year, but is still there today. The Central Archaeological Council should be consulted on the fate of the finding based on current data. We all talk about the excellent protection we provide but still leave monuments to their fate.

‟The decision taken in 2016 approved the finding’s preservation in situ, with measures that would safeguard it. These measures were never implemented. Today the finding is in very poor condition. Much of this unique finding has already been lost”.

The Minister called for a referral at the Council meeting on February 4 or 11 so that following its members’ examination of the site, the Council can decide on the finding’s in situ preservation. In view of the very poor state of the finding, the Minister also requested, that suggestions by the Central Archaeological Council be submitted regarding the finding’s relocation for it, the Central Archaeological Council, to have an overall picture of the data so as to provide an opinion. It should be noted that in 2016 the Stavros Niarchos Foundation expressed its willingness to allocate €5 million for the finding’s protection and enhancement.

The “Captives” mass grave was discovered in March 2016 while excavating the Esplanade in Phaleron. It is a group burial of 79 human skeletons grouped in three trenches and chained to each other by the wrists. The skeletons belong to men of different ages, executed in the same way, with a death blow to the side of the head. In the first trench 40 men have been buried with respect, that is to say with proper libations, but their burial had not been prepared by their families. Their hands had been bound in front of them. The men buried in the second trench had their hands tied behind their back, while in the third trench they had been tied together on a length of wood, with their hands raised, the sign of a dishonourable burial.

The find was included in the 10 most important archaeological events of the year by the Archaeology & Arts journal and dates from the third quarter of the 7th century BC. It was a time full of unrest, uprisings and revolutions between followers of the aristocrats and the tyrants. As far as this particular finding is concerned, it is either related to the Kiloneion Agos (also known as Cylon Agos) or to corresponding historical events. According to Stella Chryssoulaki, head of the Ephorate of Antiquities of West Attica, Piraeus and Islands, the identification of the captives with the Kylonion Agos is a working hypothesis, since the finding dates back accurately to those 25 years of political turmoil.