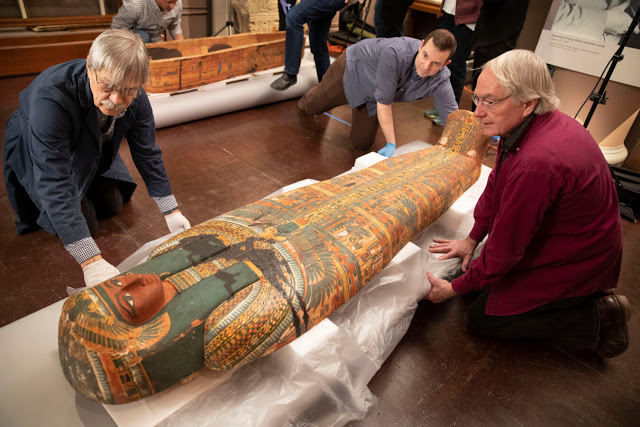 Three men, one at each end and one at the middle, slowly and gingerly lifted the wooden lid as if handling a giant eggshell. Quietly offering each other direction and status reports, they glided a few steps and placed the lid atop a Styrofoam support structure for safekeeping.

Then they looked back at the 3,000-year-old coffin and what was now visible inside: an image of the ancient Egyptian sun god Ra-Horakhty, partially obscured by a thick, tar-like coating.

It “was a heart-stopping moment,” said Peter Der Manuelian, Barbara Bell Professor of Egyptology and director of the Harvard Semitic Museum, of the discovery his team made last month after opening the coffin of Ankh-khonsu, a doorkeeper in the Temple of Amun-Ra.

The find was a highlight of a week-long research project led by Manuelian and financed by a grant from the Dean’s Competitive Fund for Promising Scholarship. The goal was to create a complete digital visual record of Ankh-khonsu’s coffin, along with two others, which then can be shared with students, researchers, museum visitors, and other enthusiasts. It’s also part of a push by the museum to find ways to allow greater access to its collection of antiquities.

The body of Ankh-khonsu had been removed more than 100 years ago when the coffin was brought from Egypt to Cambridge, and the container was reopened about 30 years ago. But for reasons unknown, “there was no modern documentation of the coffin’s interior, so we had no idea what to expect, plain wood or an exquisitely painted deity staring back at us,” said Manuelian. “It turned out to be the latter, hiding somewhat beneath a layer of resinous material used in the funeral process.” The two other coffins, whose former inhabitants were the female temple singer Mut-iy-iy and a priest and metal engraver named Pa-di-mut, had more complete records.

Despite the uneven texture of the area and the dark coating, Manuelian and his colleagues could see the yellow, orange, and blue painting and the hieroglyphs that read “Ra-Horakhty, the great God, Lord of Heaven” next to the figure.

As part of the project, Manuelian assembled an “all-star cast” of conservators, a professional photographer, and pigment sampling and residue and wood analysis experts to collect information and capture imagery of the coffin materials and adornments. Colleagues came from as far away as University College London and from just down the street at the Harvard Art Museums.

Over the course of their work, a dozen people congregated to document and analyze every inch of the artifacts. All three coffins date from Dynasty 22 (945‒712 BCE) and came to the museum from modern-day Thebes, Egypt, between 1901 and 1902. The coffins of Mut-iy-iy and Ankh-khonsu are made of wood, likely sycamore, while that of Pa-di-mut is a cartonnage case made of linen and plaster that was once housed within a wooden box. The closed coffins are displayed on the second floor of the Semitic Museum.

In addition to conservation efforts, assistant curator of collections Adam Aja and students in his co-taught Harvard Extension School course “Museum Collections Care,” were on hand to 3-D scan the pieces, while Manuelian produced the camera-based photogrammetry of the coffins: top, bottom, interior, and exterior. The group worked with researcher Mohammed Abdelaziz of Indiana University on an animated and rotatable “first draft” of all three coffins.

“The work was timed to coincide with this January term course, and it was the perfect opportunity to involve students in one of our complex, multiphase collections projects,” said Aja. “In addition to witnessing all of the stages of preparation and study, they were actively engaged in capturing and producing the digital content.”

Consulting conservators Dennis and Jane Piechota, who regularly work with the Semitic Museum and the Peabody Museum of Archaeology and Ethnology, ensured that the coffins were removed from their display cases safely, transported to the research room, and laid out properly for photography and scanning.

“It’s an honor to work on these artifacts up close, and unusual to be able to touch something so old and containing so much history,” said Jane Piechota.

Opening the tops, which had been closed for decades, was a sizeable first hurdle. The Piechotas examined the contact points between lid and coffin for signs of pressure and fusing between the pieces, inserting thin wedges of wood all around the lid to begin the separation and lifting process.

Turning the coffins to photograph and scan them required more dexterity and care, due to the age and delicacy of the artifacts.

“Turning over the coffins is petrifying! They’re heavy, and if we don’t handle them carefully they can be easily damaged,” said Dennis Piechota. “Once the lid came off, we looked inside at the construction of the sides and bottom of each coffin. We inspected the joints that keep the wooden pieces together, to make sure they would stay together as we turned them.”

Researchers collected fabric, paint, and resin samples, and studied the texts and iconography covering the wooden boxes and ancient plaster cartonnage case, including the black resinous “goo” covering the paintings.

At the same time, Eden Piacitelli and Lauren Wyman, master’s degree candidates in museum studies at Harvard Extension School, used a 3-D wireless scanner to capture every detail of the coffins, then used software to create rotatable digital models.

“This was all very new for me, with new technology. I’ve never been this close to an antiquity before,” said Piacitelli. “Being part of the team doing the scanning was most exciting because it’s a learning process for everybody. Working with these experts across [different] fields has been very intimidating, but they have been very generous with their time and their knowledge.”

The project marked the latest step in the museum’s journey to make more of its antiquities accessible to a wider audience (previous digital modeling processes included an augmented reality app to accompany an exhibit of the Dream Stela). Manuelian also directs the Giza Project, an initiative that assembles all the archaeology around the Giza Pyramids, including a virtual reality component.

“Even five years ago, we didn’t have these technological developments,” said Joseph Greene, deputy director and curator of the museum. “So we wanted to do everything we could to study and record information about these artifacts for the next generation of researchers.”