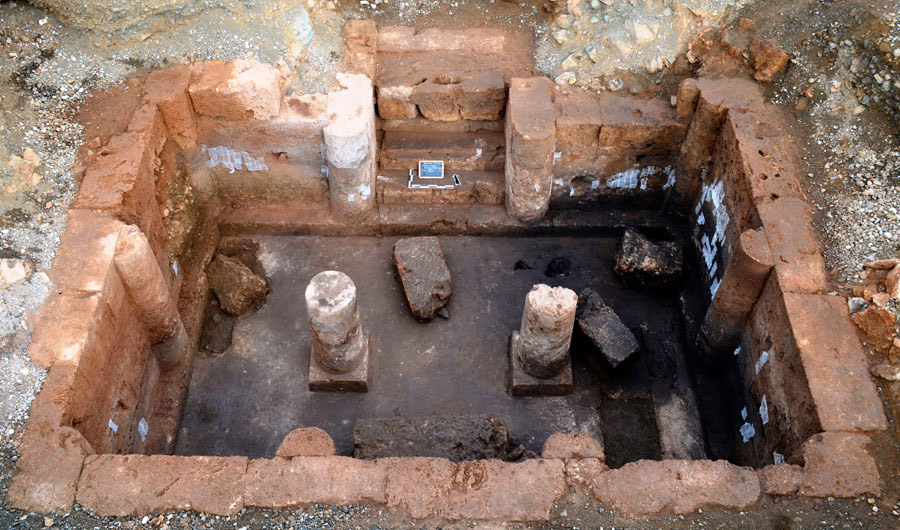 Three impressive funerary monuments which might open a new chapter to the study of the evolution of the so-called Macedonian Tombs have been discovered.

The tombs, found by Dr. Angeliki Kottaridi (Director, 17th Ephorate of Prehistoric and Classical Antiquities), have been located in the area surrounding the Vergina Town Hall, where a cluster of very important tombs, connected with the Temenidae rulers of Macedonia, had been brought to light 15 years ago.

Of the three tombs, the middle one is described by Dr. Kottaridi as “large, stone-built cist grave, surviving almost completely up to its original height, modestly decorated with blue and red pained bands and with the characteristic stone pedestal that points the position of the funerary bed and the funerary urn placed on its South side”. Another tomb, located south, is described above, was found “very destroyed”.

North of both tombs described above, a very impressive monument came to light. “The tomb, surviving up to the middle of its original height (estimated to reach 4,50 m.), is formed as a wide hypostyle hall measuring 7 X 5 m. Two non-fluted Ionian columns with considerably high square bases, were placed along the building’s axis supporting the stone ceiling while semicolumns –two on each long and two on each narrow wall – were adding grace and elegance. In each of the corners, quarter-columns were placed instead of pilasters […]. A column capital was found next to the western semi-column. Covered with white plaster, the lines of its scrolls painted with blue and its scrolls’ centre painted in red, it repeats a type known from mid 5th century BC monuments. The gate opening, framed by two semi-columns, is located in the middle of the Northern broad side and it could be reached through a monumental stairway. The pedestal connected with the funerary bed and the urn is located straight opposite the gate”, says Dr. Kottaridi adding that “this building, with its unprecedented plan, promises to open a new page to the discussion on the origins of the Macedonian Tombs”.

Still, beyond its architectural plan, the human and animal remains found in this tomb are worth examining. Dr. Kottaridi counts “fifteen horses, several dogs, a dozen of adults, several infants and toddlers” which must had been thrown dead inside the empty and destroyed grave, well after its original use, alongside shards of pottery, tiles, pieces of a marble funerary stele and a magic scroll (katadesmos). The single layer they cover, the position of the bones that shows they supported bodies when they were placed there and the shards that can be restored, point that they were thrown in the tomb at once, during a single tragic incident. This, according to the pottery and a bronze coin, is probably connected to the destruction of Aigai which followed Perseus’ defeat by the Romans in Pydna (168 BC) and the fall of the Macedonian Kingdom.

At any case, all these tombs were found violently looted. This fact might be connected to the destruction of the royal necropolis of Aigai in 276 BC by Pyrrhus the Great Gaul mercenaries –an incident reported by Diodorus. However, traces from the funerary pyres were found during the excavation. A relief in gold, probably part of a shield’s decoration, depicting fighting warriors was found in the cist grave. A golden oak, found also in the cist grave, witnesses that a golden wreath was present in the tomb, meaning that the deceased was a man. The same result comes from finding pieces of a cuirass in the form of scales in the hypostyle tomb, while a number of golden discs carved with the characteristic Macedonian star also survived the looting.

Between the hypostyle and the cist grave, the archaeologists -digging a tiny bit deeper from the ground- found a 15 m. – long floor paved with pebbles as well as pieces of white and colored wall plaster. There are no traces from the original building, due to the removing of its building material for secondary use. However, fragments from alabaster unguentariums and a bronze tinned plate found on the ground probably demonstrate possible funerary cult performance, while a coin of Perdikkas II (454-413 BC), helps to the dating. Fragments of a very big sculpted floral motif with spiral shoots, buds and acanthus leaves recalling the central antefix of the Parthenon came probably from an overground funerary monument, while the stratigraphy indicates that there have been three or four more tombs in the cluster’s area.

“The dig’s completion as well as research and conservation of the finds will help in defining the general image of the area. It is not impossible that new elements will come to light to help us connect these monuments with those people who, from the time of Amyntas I ((530-498 BC) and Alexander I (498-454 BC) up to Philip II(359-336 BC), defined the fate of the Macedonian Kingdom”, says Dr. Kottaridi.

* Dr. Kottaridi presented her work yesterday 20/03/2013 during the proceedings of the annual Conference for the Archaeological Work in Macedonia and Thrace.