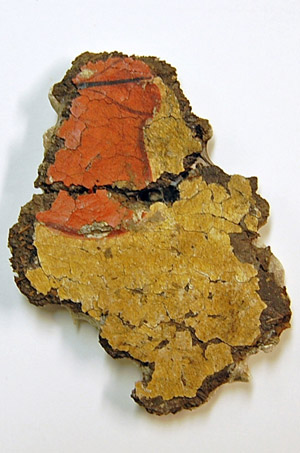 Tow Egyptologists from Berlin’s Egyptian Museum and Papyrus Collection visited the World Museum Liverpool in order to discuss a prospective collaboration regarding a better documentation of objects kept in both museums, which come from Tell el Amarna.

Liverpool houses material from Flinders Petrie’s excavations of 1891-2 and those of the Egypt Exploration Society 1921-36. According to a blog post by Dr. Ashley Cooke, Head of Antiquities and Curator of Egyptology (World Museum Liverpool), Berlin archaeologists Sandro Schwarz and Anne Seiler spent the day in the gallery and storerooms to get an idea of Liverpool’s  varied holdings-including the above pictured painted plaster fragment showing Pharaoh Akhenaten’s lower lip and chin- in order to form ideas on possible entries to be included on a web database of objects excavated at the city of Akhenaten at Amarna. The database will include scans of excavation archives and geographical data so the public can see how and where the objects were discovered.

Eventually, the digital resource will bring together fragmentary surviving objects, restoring them digitally to their original condition (if possible) and helping experts getting a better appreciation of this ancient city where excavations are still continuing.