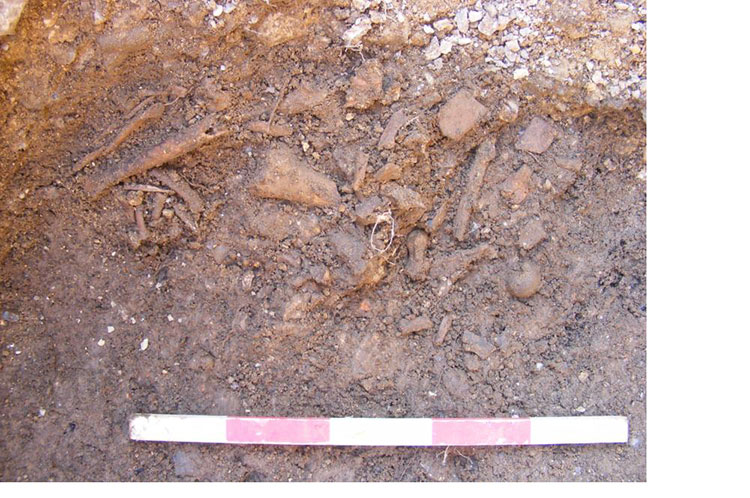 Bone fragments from the skeletons of two pre-pubescent children as well as pieces of Bronze Age pottery have been discovered by archaeologists at the back of an antiques shop in Marlow, Buckinghamshire.

The approximately 250 re-deposited bones form an earlier date were found in a pit dating to the mid-12th century, part of a wider 200 sq.m. excavation site on Marlow High Street. Apart from medieval finds from the 12th-14th centuries, a piece of Bronze Age beaker pottery, probably from a pot buried with the bones, was found in the pit suggesting the burial could date to the Bronze Age. The children’s teeth revealed they were between 10 and 12 years old and radiocarbon dating confirmed that they were buried sometime between 2140BC and 1950BC The single piece of Bronze Age (Beaker) pottery, weighing 12g, is decorated with bands of multiple horizontal lines of comb impressions, flanking a single surviving narrow zone, 10mm wide, which contains a saw-tooth pattern also formed from comb impressions.

The findings are of particular significance, since the earliest recording of Marlow up to now was from 1015AD, says John Laker, of Archaeology in Marlow, who worked jointly with MOLA on the excavation. The earliest recording historians have of the town of Marlow is in the Codex Diplomaticus Aevi Saxonici, where it is referred to as Merelafan. The discovery of the bones and pottery suggest that Marlow was inhabited long before Anglo-Saxon times.

An aerial survey around the barrow cemetery at Low Grounds Farm, identified the site as a possible island on the Thames, which means that the burials might have been separated from the Farm by a section of the Thames.

As John Laker said, “It looks like people lived in Marlow well before Anglo-Saxon times and that Marlow was a des-res around 4,500 years ago.”