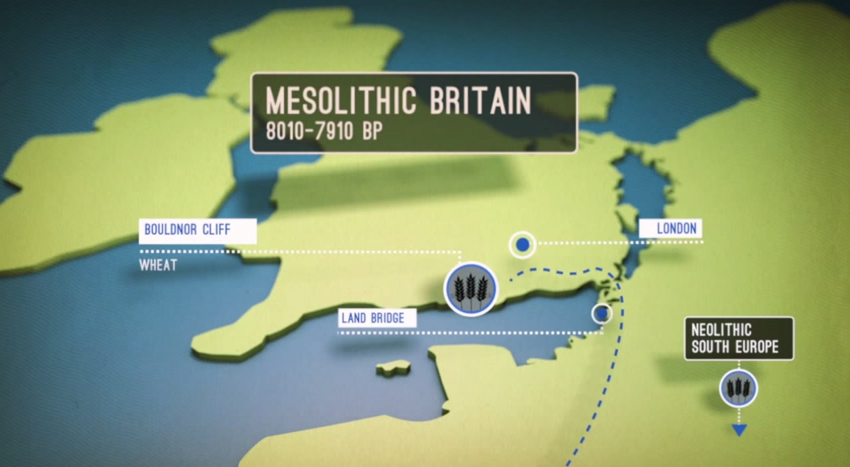 Snapshot of the video released by Warwick University.
News: Stone Age
Surprise cultural connections between Britain and Europe 8,000 years ago
Shows evidence for a variety of wheat
by Archaeology Newsroom - Monday, 2 March 2015

The ancient British were not cut off from Europeans on an isolated island 8,000 years ago as previously thought, new research suggests.

Researchers found evidence for a variety of wheat at a submerged archaeological site off the south coast of England, 2,000 years before the introduction of farming in the UK.

The team argue that the introduction of farming is usually regarded as a defining historic moment for almost all human communities leading to the development of societies that underpin the modern world.

Published in the journal Science, the researchers suggest that the most plausible explanation for the wheat reaching the site is that Mesolithic Britons maintained social and trade networks spreading across Europe.

These networks might have been assisted by land bridges that connected the south east coast of Britain to the European mainland, facilitating exchanges between hunters in Britain and farmers in southern Europe.

Called Einkorn, the wheat was common in Southern Europe at the time it was present at the site in Southern England – located at Bouldnor Cliff.

The einkorn DNA was collected from sediment that had previously formed the land surface, which was later submerged due to melting glaciers.

Dr Allaby, Associate Professor at the University of Warwick’s School of Life Sciences, argues that the einkorn discovery indicates that Mesolithic Britain was less insular than previously understood and that inhabitants were interacting with Neolithic southern Europeans:

“8,000 years ago the people of mainland Britain were leading a hunter-gatherer existence, whilst at the same time in southern Europeans farming was gradually spreading across Europe.

“Common throughout Neolithic Southern Europe, einkorn is not found elsewhere in Britain until 2,000 years after the samples found at Bouldnor Cliff. For the einkorn to have reached this site there needs to have been contact between Mesolithic Britons and Neolithic farmers far across Europe.

“The land bridges provide a plausible facilitation of this contact. As such, far from being insular Mesolithic Britain was culturally and possibly physically connected to Europe.

“The role of these simple British hunting societies, in many senses, puts them at the beginning of the introduction of farming and, ultimately, the changes in the economy that lead to the modern world”.

“The novel ancient DNA approach we used gave us a jump in sensitivity allowing us to find many of the components of this ancient landscape”.

Commenting on the research’s findings Professor Vincent Gaffney, research co-lead and Chair in Landscape Archaeology at the University of Bradford, said:

“This find is the start of a new chapter in British and European history. Not only do we now realise that the introduction of farming was far more complex than previously imagined. It now seems likely that the hunter-gather societies of Britain, far from being isolated were part of extensive social networks that traded or exchanged exotic foodstuffs across much of Europe.

“The research also demonstrates that scientists and archaeologists can now analyse genetic material preserved deep within the sediments of the lost prehistoric landscapes stretching between Britain and Europe. This not only tells us more about the introduction of farming into Britain, but also about the societies that lived on the lost coastal plains for hundreds of thousands of years.

“The use of ancient DNA from sediments also opens the door to new research on the older landscapes off the British Isles and coastal shelves across the world”.

Co-lead Professor Mark Pallen, leader of the Pallen Group at the University of Warwick’s Medical School, explains how the researchers employed a metagenomic approach to study the einkorn DNA:

“We chose to use a metagenomics approach in this research even though this has not commonly been used for environmental and ancient DNA research. This means we extracted and sequenced the entire DNA in the sample, rather than targeted organism-specific barcode sequences. From this we then homed in on the organisms of interest only when analysing DNA sequences”.

The research builds on the work of the Maritime Archaeology Trust, who also collected the sediment samples from the site. The Trust’s Director, Garry Momber, commented:

“Of all the projects I have worked on, Bouldnor Cliff has been the most significant. Work in the murky waters of the Solent has opened up an understanding of the UK’s formative years in a way that we never dreamed possible.

“The material remains left behind by the people that occupied Britain as it was finally becoming an island 8,000 years ago, show that these were sophisticated people with technologies thousands of years more advanced than previously recognised. The DNA evidence corroborates the archaeological evidence and demonstrates a tangible link with the continent that appears to have become severed when Britain became an island”.

The research is published in a Science paper entitled: ‘Sedimentary DNA from a submerged site reveals wheat in the British Isles 8,000 years ago’.