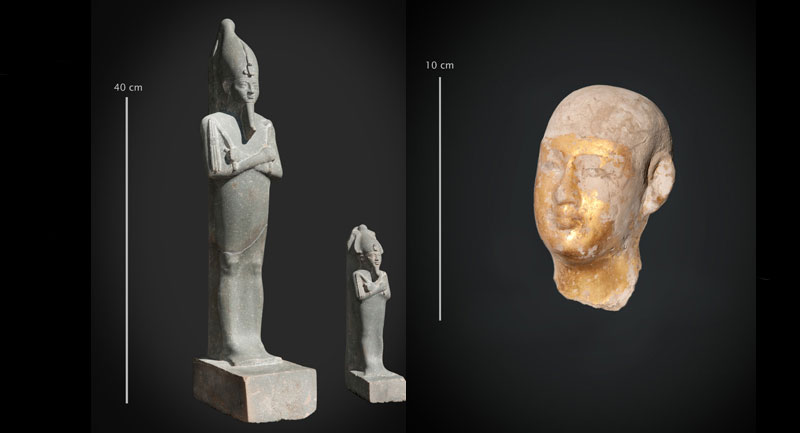 The excavation of a favissa (repository pit for cultic objects)discovered in early December 2014 near the temple of the god Ptah at Karnak has just been completed yielding numerous religious artefacts of exceptional quality, with the use of a new recording method that virtually reconstructs each step of the discovery with millimeter accuracy.
The excavation was conducted by the French-Egyptian Center for the Study of the Temples of Karnak — Cfeetk which was founded by the CNRS and the Egyptian Ministry for Antiquities to study and restore the Amun-Re precinct at Karnak (Luxor).

Cfeetk archaeologists found 38 statues, statuettes and precious objects, placed around the lower part of a seated statue of the god Ptah. The find notably included: 14 statues, statuettes and figurines of Osiris, 3 statuettes of baboons, 2 statuettes representing the goddess Mut, including one covered in hieroglyphics, 1 head and fragments of a cat statuette (Bastet), 2 unidentified statuette bases, 1 small plaque and the upper part of a small stele marked with the name of the god Ptah, and several inlays. A sphinx statue and a small statue head probably representing the god Imhotep were also discovered in the upper part of the pit and fragments of a stele were found at the edge.

According to the ceramic material found in the pit and the epigraphic data, this collection of statues dates back to the 8th-7th century BC, which marked the beginning of the 25th Egyptian dynasty.

A topographer specialized in archaeology made a series of photogrammetric reconstructions of the objects through high-density image correlation. This method makes it possible to locate all the objects after they have been removed and study their layout in detail. It also enabled the scientists to assemble a video of the whole removal operation.