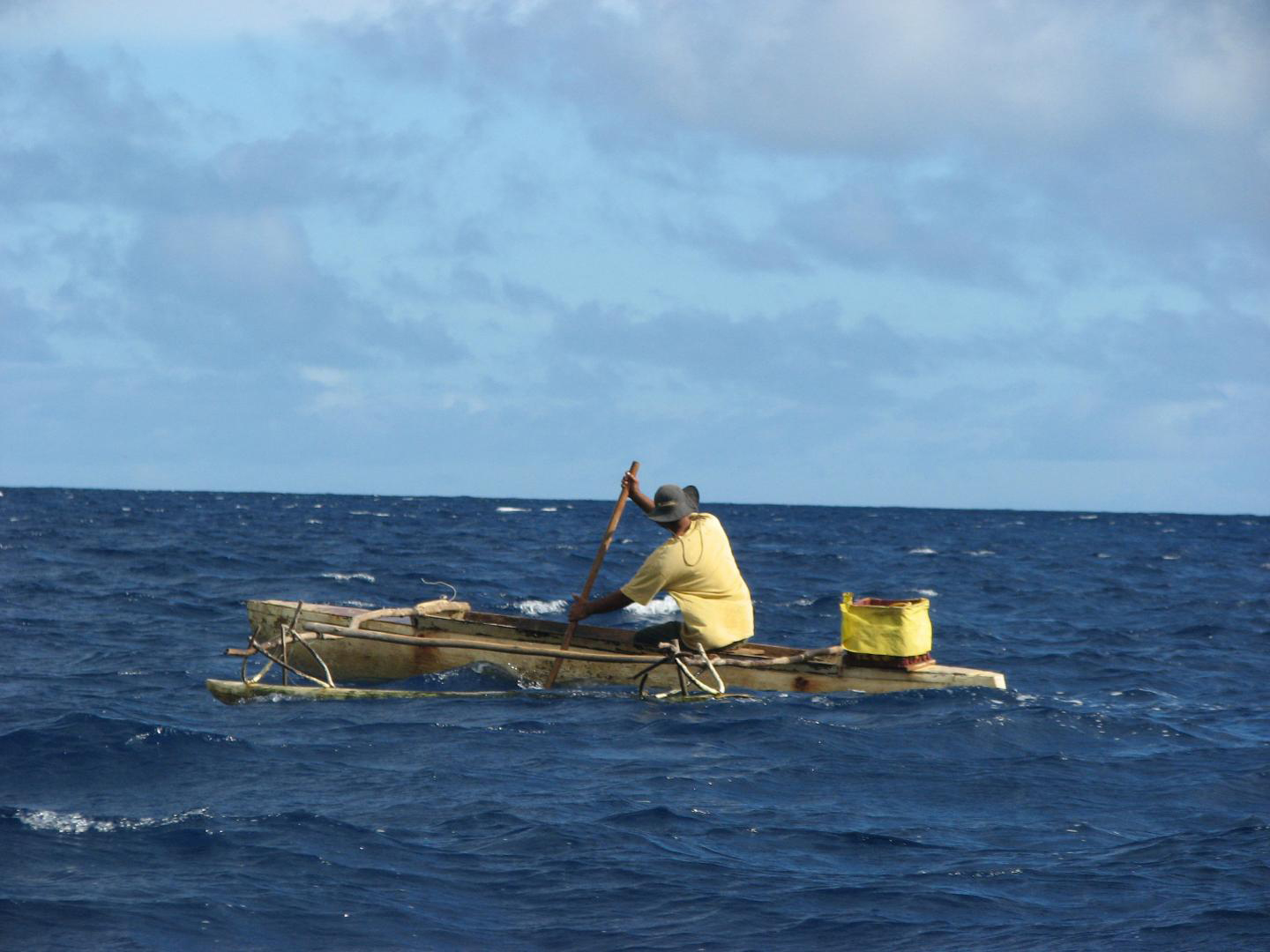 A canoeist paddles between the islands of Vava'u, Tonga. A new University of Utah study uses mathematical modeling to get a better idea of the strategies employed by early seafarers when they used outrigger canoes to settle the islands of the vast Pacific Ocean between 3,500 and 900 years ago. Credit Adrian Bell, University of Utah
News: Early island settlers
Calculating how the Pacific was settled
Sailing against prevailing winds, spotting big islands
by Archaeology Newsroom - Wednesday, 22 April 2015

Using statistics that describe how an infectious disease spreads, a University of Utah anthropologist analyzed different theories of how people first settled islands of the vast Pacific between 3,500 and 900 years ago. Adrian Bell found the two most likely strategies were to travel mostly against prevailing winds and seek easily seen islands, not necessarily the nearest islands.

The study – published in this month’s issue of the journal American Antiquity – suggests early Pacific seafarers “weren’t just drifting around,” says Bell, the study’s first and senior author. “It suggests they had a strategy for the best way to discover new places: movement across the ocean in a less risky fashion – often meaning into the wind – and moving to places that were more easily visible.”

The study found no evidence that other theories explained how the 24 major island groups of the Pacific Ocean were settled by speakers of Austronesian languages in double-hulled and outrigger canoes between 3,500 and 900 years ago:

-Distance wasn’t a factor, since relatively nearby New Zealand was settled long after more distant parts of the Pacific. That suggests people already were adept at long-distance ocean travel when settlement of the Pacific began.

-Habitat quality and abundance of resources didn’t matter in determining which islands were settled first.

-Nor was there evidence that social class differences or a desire to escape despotic rulers launched lower-class people on voyages of exploration, though a thorough test of this hypothesis requires more data.

The study didn’t consider all theories that might explain why Pacific islands were settled in the sequence they were, but statistically analyzed some major theories to show how a new statistical approach can provide more rigorous examination of exploration of the Pacific than what has been done before.

“The colonization of small islands in the vast expanse of the Pacific is one of the most remarkable chapters of human history,” the study says. “The fundamental nature of such processes and the decades of research on settlement strategies demand a better analytical approach and data. Here we have demonstrated how we can go beyond the construction of plausible narratives and ad hoc interpretations of archaeological information in order to develop explicit models of different colonization strategies and rigorously test them against the data.”

Studying how the Pacific was colonized is important because “migration is a key driver of human cultural and genetic evolution,” the researchers add.

The study involves expansion of Lapita people, who emerged from Southeast Asia, inhabited the Bismarck and Solomon islands east of New Guinea about 3,500 years ago and then pushed south and east to become the first people to settle the remote Pacific. They were the ancestors of many Melanesians and Micronesians and all Polynesians.

Bell and colleagues developed a model or simulation of how colonization happened in 24 major island groups. It was adapted from an epidemiological model of how diseases spread from among people or other animals. Instead of using individual characteristics to assess the probability of infection, the model’s variables were such factors as island size, distances from other islands, prevalent wind directions and the inferred level of social hierarchy among people living on the island.

The computer modeling involved a math equation that “is like a clock that is ticking through time, and with each ticktock we calculate a probability of an island either being colonized or not,” Bell says. “We use the dates we know for roughly when islands were colonized. So as the model moves forward in time, it will suggest some islands to be colonized first rather than others. How well it matches up with the data will distinguish which model comes out on top.”

The results held up even when Bell artificially increased uncertainties in the times when specific islands were colonized.

Bell analyzed four theories or models for how the Pacific might have been colonized, and variations of those models:

1. An outward “wave of advance” from a central point, like ripples spreading from a rock dropped in a pond. Yet mathematical analysis showed “distance between islands wasn’t a factor in whether an island would be settled or not,” Bell says.

What did fit the colonization data – and did so better than anything – was if the wave of advance concept of distance was modified by the “angle of target” – a single number representing an island’s visibility based on its height, width and distance.

2. Mathematical analysis showed the second-most likely colonization strategy was “risk-minimizing” by “heading into the prevailing wind on outward, exploratory journeys, allowing for safer return [with the wind] from failed searches,” the study says.

Bell says there has been debate: Did early explorers travel east only during periods when the prevailing easterly-southeasterly winds were interrupted by westerlies, or “were early seafarers sophisticated enough to direct their boats against the wind?” The study indicates the latter, which “suggests fairly sophisticated canoe technology.”

3. The study neither ruled out nor confirmed the hierarchy model – the concept that people were pushed to explore by a hierarchal social structure, either to escape a despotic ruling class that dominates resources, or to become founders of new societies.

The researchers used data showing relationships among 21 Austronesian languages and data about the level of hierarchy that existed at the time of contact with Europeans, and then applied a statistical method to estimate the likely form of social organization when various islands were settled. But they lacked enough data to test with certainty whether or not social hierarchy helped drive settlement of the Pacific.

4. The calculations ruled out the habitat-quality model – the idea that people settled high-quality islands first.

“The fact that habitat quality was not a major reason for going somewhere suggests the actual act of moving across the ocean was the major factor in settling the Pacific,” says Bell. “Crossing and exploring was the driving force rather than skipping an island and looking for a better island.”

‘A sea of islands’

Bell – whose mother is Tongan and whose father is a European-born New Zealander – believes the early seafarers saw the vast Pacific as small.

“The bottom line is islanders may have viewed the Pacific as more of a sea of islands – places to go – rather than islands that are far away and separated by huge obstacles,” he says. “You can look at this large ocean, which is bigger than many continents, and say, ‘Wow, look at how separated these islands are.’ But from another perspective you can say, ‘Look at all these islands out there for us to explore.'”

“The idea that distance didn’t matter for founding early Pacific societies – there is some continuity with today’s island societies, where distance is not a big factor in maintaining interactions among close family groups,” Bell says. He notes that many Pacific Islanders today don’t bat an eyelash at traveling thousands of miles for weddings and other family occasions “so family relations are maintained across the ocean.”