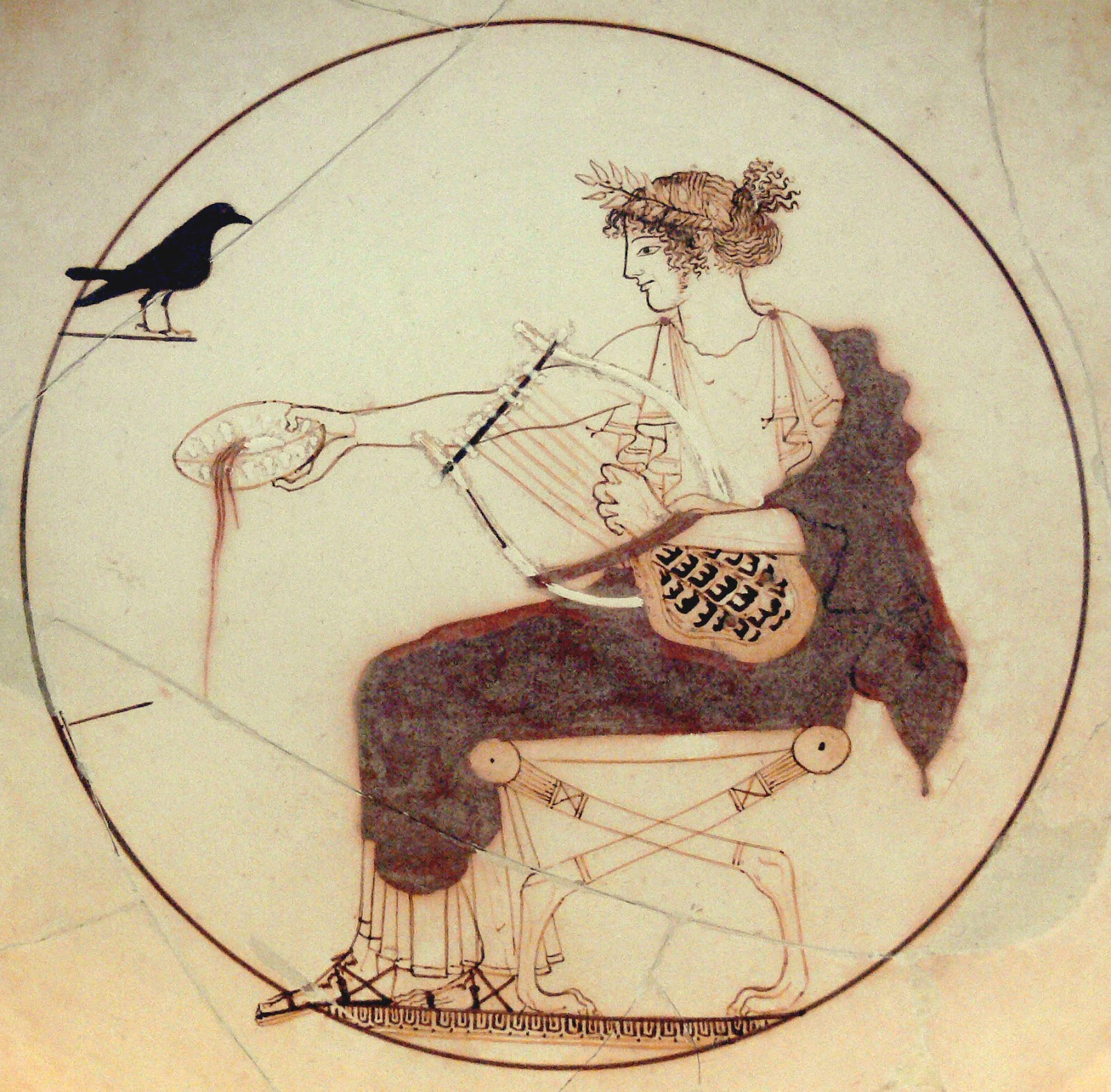 Apollo holding a kithara in his left hand and pouring a libation with his right hand. Facing him, a black bird. Tondo of an Attic white-ground kylix attributed to the Pistoxenos Painter (or the Berlin Painter, or Onesimos). Archaeological Museum of Delphi, Inv. 8140, room XII.
:
The Case of the Major Homeric Hymns
by Archaeology Newsroom - Monday, 11 May 2015

Polyxeni Strolonga (American School of Classical Studies at Athens) will address the topic “Shaping Religious Beliefs: The Case of the Major Homeric Hymns”.

The lecture is part of the Greek Religion Seminar series organized by the Swedish Institute at Athens.

Scholars often link the Homeric Hymns with certain rituals and festivals in order to assign an aetiological function to them or to locate them in a religious performative context. In this line of interpretation the Homeric Hymn to Demeter reflects the Eleusinian Mysteries (Foley 1993; contra Clinton 1992:28-37 who links it with the Thesmophoria), the Homeric Hymn to Apollo provides an aetiology for Apollo’s three cults and a foundation myth for the Delphic oracle (see Chappell 2006), and the Homeric Hymn to Hermes was performed at the Hermaia, an athletic festival in the god’s honor (Johnston 2002; contra Vergados 2012: 150-153). Even the Homeric Hymn to Aphrodite, which lacks any obvious cultic dimensions, has been linked to rituals of the adoration and the cleansing of cult images (Breitenberger 2007; cf. Faulkner 2008 who views the hymn purely as secular court poetry).

My paper by treating the Hymns as religious poetry dissociates them from specific ritual contexts and relocates them in a panhellenic belief system. A structuralistic and anthropological approach to the Hymns indicates that these poems, which express a theological speculation (Clay 2012) even if they are not cult hymns (Clay 1989), portray gods in such a way so as they display a consistent behavior with respect to their reciprocal relationships with humans. In the narrative of the Homeric Hymns the gods employ quid pro quo and do ut des exchanges in place of punishment (e.g. Aphrodite and Anchises) and they present rituals and priesthood as the ideal reciprocal communication between gods and humans (e.g. Apollo and his priests). The consistency in which gods reciprocate with humans in a religious context and the positive nature of the gods’ offerings constitute a rationalization for the practice of reciprocity and reflect religious beliefs with a panhellenic appeal as the Homeric Hymns shape the mortals’ perception of the Greek Pantheon beyond local cults.