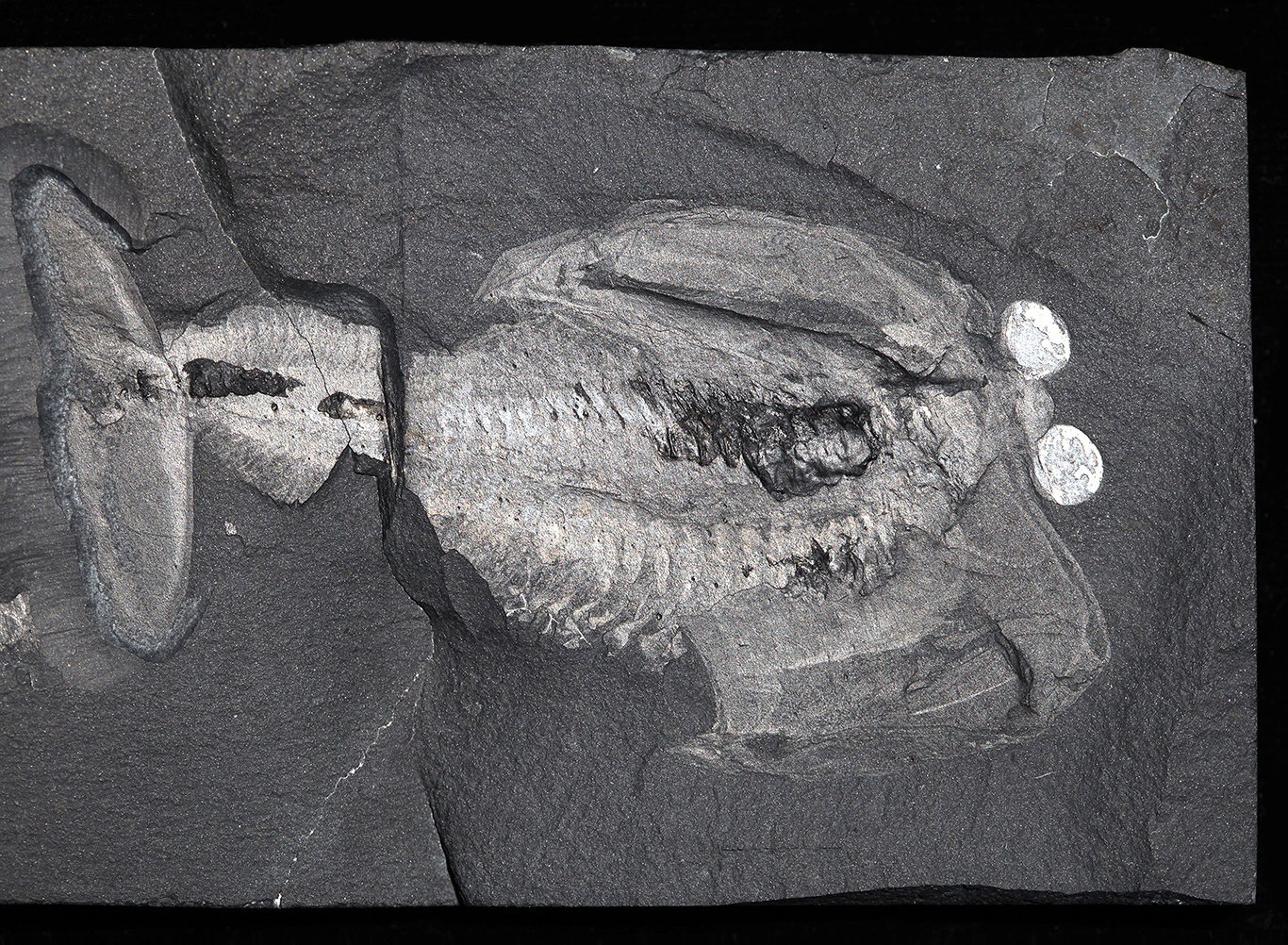 The fossil of a submarine-shaped arthropod was found in the Burgess Shale in the Canadian Rockies. Credit Jean Bernard Caron/Royal Ontario Museum
News: Evolution
500 million-year-old brain shows how heads evolved in early animals
A bizarre creature resembling a submarine
by Archaeology Newsroom - Thursday, 14 May 2015

The discovery of a 500 million-year-old fossilised brain has helped identify a point of crucial transformation in early animals, and answered some of the questions about how heads first evolved.

A new study from the University of Cambridge has identified one of the oldest fossil brains ever discovered – more than 500 million years old – and used it to help determine how heads first evolved in early animals. The results, published on 7 May in the journal Current Biology, identify a key point in the evolutionary transition from soft to hard bodies in early ancestors of arthropods, the group that contains modern insects, crustaceans and spiders.

The study looked at two types of arthropod ancestors – a soft-bodied trilobite and a bizarre creature resembling a submarine. It found that a hard plate, called the anterior sclerite, and eye-like features at the front of their bodies were connected through nerve traces originating from the front part of the brain, which corresponds with how vision is controlled in modern arthropods.

“The anterior sclerite has been lost in modern arthropods, as it most likely fused with other parts of the head during the evolutionary history of the group,” said Dr Javier Ortega-Hernández, a postdoctoral researcher from Cambridge’s Department of Earth Sciences, who authored the study. “What we’re seeing in these fossils is one of the major transitional steps between soft-bodied worm-like creatures and arthropods with hard exoskeletons and jointed limbs – this is a period of crucial transformation.”

Ortega-Hernández observed that bright spots at the front of the bodies, which are in fact simple photoreceptors, are embedded into the anterior sclerite. The photoreceptors are connected to the front part of the fossilised brain, very much like the arrangement in modern arthropods. In all likelihood these ancient brains processed information like in today’s arthropods, and were crucial for interacting with the environment, detecting food, and escaping from predators.

During the Cambrian Explosion, a period of rapid evolutionary innovation about 500 million years ago when most major animal groups emerge in the fossil record, arthropods with hard exoskeletons and jointed limbs first started to appear. Prior to this period, most animal life on Earth consisted of enigmatic soft-bodied creatures that resembled algae or jellyfish.

These fossils, from the collections of the Royal Ontario Museum in Toronto and the Smithsonian Institution in Washington DC, originated from the Burgess Shale in Western Canada, one of the world’s richest source of fossils from the period.

Since brains and other soft tissues are essentially made of fatty-like substances, finding them as fossils is extremely rare, which makes understanding their evolutionary history difficult. Even in the Burgess Shale, one of the rare places on Earth where conditions are just right to enable exceptionally good preservation of Cambrian fossils, finding fossilised brain tissue is very uncommon. In fact, this is the most complete brain found in a fossil from the Burgess Shale, as earlier results have been less conclusive.

“Heads have become more complex over time,” said Ortega-Hernández, who is a Fellow of Emmanuel College. “But what we’re seeing here is an answer to the question of how arthropods changed their bodies from soft to hard. It gives us an improved understanding of the origins and complex evolutionary history of this highly successful group.”