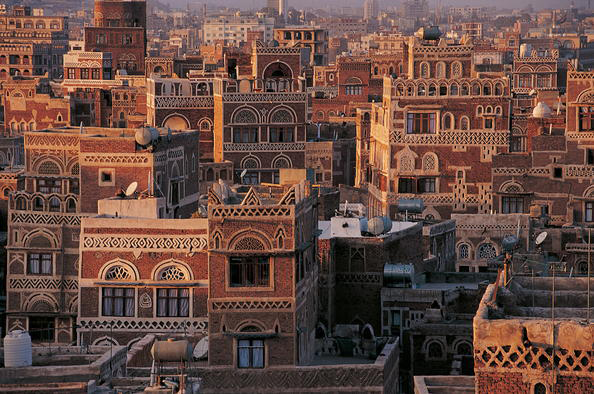 Situated in a mountain valley at an altitude of 2,200 m, the Old City of Sana'a is defined by an extraordinary density of rammed earth and burnt brick towers rising several stories above stone-built ground floors, strikingly decorated with geometric patterns of fired bricks and white gypsum. Photo: UNESCO
News: Culture in conflict zones
SOS for Yemen’s cultural heritage
UNESCO urges all parties to keep it out of the conflict
by Archaeology Newsroom - Friday, 15 May 2015

Over the past few days, UNESCO received reports of severe damage to significant cultural heritage sites in Yemen. According to several media reports and official sources, the old city of Sana’a, Yemen’s capital, was heavily bombed during the night of 11 May 2015, causing severe damage to many of its historic buildings. In addition, the old city of Sa’adah, which is included on Yemen’s World Heritage Tentative List, as well as the archaeological site of the pre-Islamic walled city of Baraqish, have also suffered damages.

“I condemn these destructions and I call on all parties to keep cultural heritage out of the conflict”, said the Director-General of UNESCO, Ms. Irina Bokova. “I am particularly distressed by the news concerning air strikes on heavily populated areas such as the cities of Sana’a and Saa’dah. In addition to causing terrible human suffering, these attacks are destroying Yemen’s unique cultural heritage, which is the repository of people’s identity, history and memory and an exceptional testimony to the achievements of the Islamic Civilization”.

“I call on all parties to refrain from any military use or targeting of cultural heritage sites and monuments, in respect of their obligations under international treaties, particularly the 1954 UNESCO Convention on the Protection of Cultural Property in the Event of Armed Conflict and its two Protocols, as well as the 1972 World Heritage Convention” said the Director-General, urging for the protection of Yemen’s cultural heritage sites from collateral damage or intentional targeting.

She finally strongly welcomed the announced five-day cease-fire scheduled to begin at 11pm on Tuesday, that will allow for humanitarian relief supplies to be delivered to the country as well as first damage assessments to be carried out.

The Old City of Sana’a was inscribed on the World Heritage list in 1986. Situated in a mountain valley at an altitude of 2,200 m, Sana’a has been inhabited for more than 2,500 years. During the 7th and 8th centuries, the city became a major centre for the propagation of Islam. This religious and political heritage can be seen in the 103 mosques, 14 hammams and over 6,000 houses, all built before the 11th century. Sana’a’s many-storeyed tower-houses built of rammed earth (pisé) add to the beauty of the site.

The Old City of Sana’a was restored through a major campaign launched by UNESCO in the late 1980s and early 1990s, thanks to the contribution of numerous countries and the continuous commitments of the Yemeni people and government.

Yemen has two other cultural World Heritage sites: the Old Walled City of Shibam (1982) and the Historic Town of Zabid (1993), inscribed on the World Heritage in Danger list since 2000.