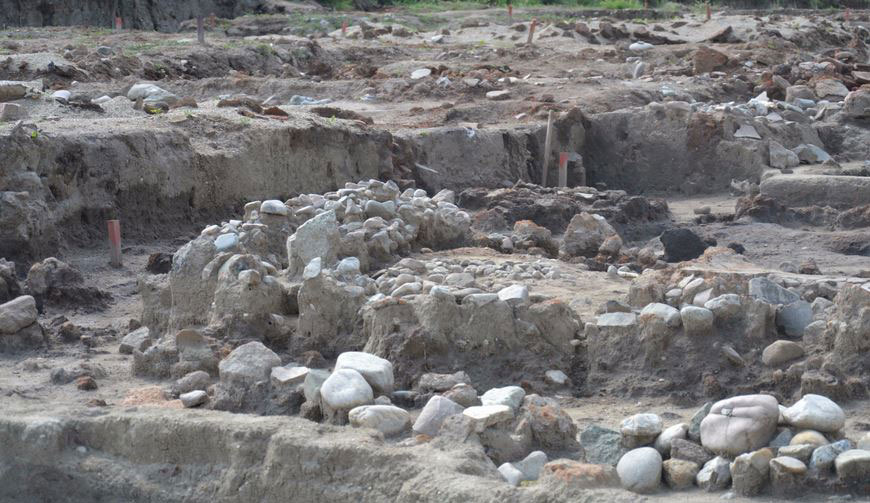 The uban planning of the settlement is unprecedented. Photo Credit: Radio Blagoevgrad.
News: Neolithic Settlement
Neolithic settlement of two-storey houses unearthed in Bulgaria
The houses had been deliberately set on fire
by Archaeology Newsroom - Thursday, 21 May 2015

Archaeologists in Bulgaria have announced that they unearthed a Neolithic settlement comprising of 60 two-storey houses, in the Kyustendil region  near the town of Mursalevo, Kocherinovo Municipality, in Southwest Bulgaria. The houses date back about 8,000 years, theyw were made of wattle and clay with 20cm wide walls and they were 7 to 8 metres high. They are orientated taking the course of the sun into consideration.

The urban planning of the settlement is another impressive feature. It is marked by 3 parallel main streets and several narrow streets perpendicular to them, forming clusters of 3 to 4 houses for each quarter.

The discovery was made in Spring 2014 during excavations before the construction of the Struma Highway in the area. The location of the Highway will now have to be slightly modified not only to protect the site but also allowing tourists to visit the settlement.

The people who lived in the settlement are said to derive from Asia Minor and had a very high level of culture. Among the special features of the houses, apart from the exceptional and rare for the historical period height, is the fact that some of the houses had been deliberately set on fire. This, as associated professor Krum Buchvarov said, strengthened the clay walls allowing them to survive until today in a good condition, and offering archaeologists the opportunity to reconstruct a clear picture of the houses. “We can say almost for sure what exactly some of the houses looked like, how large they were, etc,” says Professor Vassil Nikolov from the National Institute and Museum of Archaeology of the Bulgarian Academy of Sciences, leader of the project, adding that even the exact places of the beams used for the construction are visible.

Scientists do not know why the houses were burnt, but evidence suggests that it was done in an organized way by the settlement inhabitants, burning individual houses with the use of firewood.

The houses will remain in situ until June 28, when they will be dismantled by archaeologists to investigate their deeper layers.