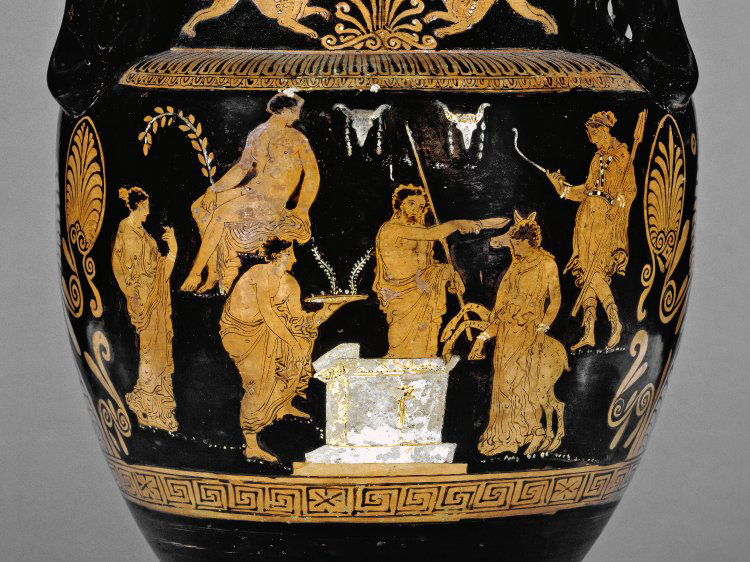 Red-figured volute-krater (bowl for mixing wine and water) showing the sacrifice of Iphigeneia. Agamemnon prepares to sacrifice her, but Artemis intervenes and turns her into a deer. The scene may have been inspired by Euripides' tragedy Iphigene. British Museum.
Research - Education: Workshop
The Emotional Life of the Leader in Ancient Greece and Modern America
Ephebe's Journey III
by Archaeology Newsroom - Monday, 25 May 2015

“The Emotional Life of the Leader in Ancient Greece and Modern America” is the topic of this year’s “Ephebe’s Journey” workshop, organized by the Centre of Hellenic Studies. It will take place on Friday, July 31-Saturday, August 1, 2015.

This year the focus lies on the emotional life of the leader within a democratic culture. The participants will compare examples of leadership in a modern submarine film, U-571 (2000) with Matthew McConaughey, to the leadership of Agamemnon in the Euripidean Tragedy, Iphigeneia at Aulis (c. 408 BCE). Each of these stories deals with the question of when it’s permissible for a leader to kill (or cause to be killed) one of the followers. Taking this question as a starting point, topics of sacrifice, decision-making, popular opinion, kinship, honor, and glory will be discussed. An online version of Euripides’ play is available here and should be read before the beginning of the workshop. Participants will also have the opportunity to participate in online discussion of issues surrounding the leader’s emotional life on the weeks leading up to the workshop.

The workshop will conclude with a discussion about the role of the humanities in the national conversations about leadership and citizenship.

To apply for this seminar, please fill out the online registration questionnaire.

Space for this seminar is limited; college students and recent graduates who are working at policy institutions and congressional offices for the summer in Washington, DC, will have priority.