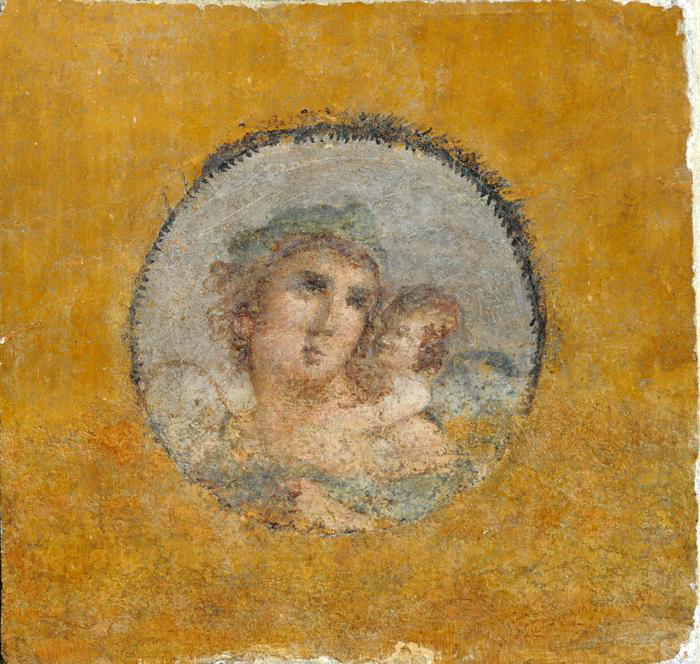 One of the Pompeii frescoes retrieved by Italian authorities. Photo Credit: ANSA.
News: Illegal antiquities trafficking
Stolen Pompeii frescoes returned to Italy by the US
Authorities of both countries cooperated in tracking them down
by Archaeology Newsroom - Thursday, 28 May 2015

A collection of stolen artefacts has been returned to Italy, following an international investigation by cooperating Italian and American authorities. The artefacts include ancient vases, frescoes and manuscripts that had been illegally removed and found in museums, auction houses and private collections in the USA.

The frescoes, had been stolen by the Pompeii archaeological superintendent’s office back in 1957 along with three other frescoes that have been recovered since. They date back to the 1st century BC. One of them shows a young woman with a cupid on her shoulder. Another shows a woman wearing a long red cloak and carrying a wine vase. The third shows a man in an elegant pose.

Traffickers had managed to lie regarding the legality of the artefacts acquisition and convince buyers, resulting in them being bought by collectors, museums and art galleries in the USA. Some of the items had been put for sale by prestigious auction houses while others were bought in good faith. Some of them had also been bought by a rich unnamed American who died recently. Most of the owners of the artefacts, however, returned them to the Italian authorities with no hesitation once they discovered they had been illegally removed and sold to them.

Apart from the frescoes, among the artefacts there are a 2,500-year-old Etruscan vase decorated with dolphins, 17th century books on botany, and a 16th century manuscript which had been stolen in 1990. There was also a 1,800-year-old lid of a Roman sarcophagus, as well as ancient Greek wine jugs (oenochoe and pelike in particular) probably from archaeological sites of ancient Greek colonies in Puglia, southern Italy.

According to the Homeland Security Investigations unit of the US Customs Service, the US have returned more than 7,600 objects to more than 30 countries and individuals since 2007.

The treasures, valued at over 30 million euros, will now be returned, to their places of origin or museums as close to them as possible, Italian Culture Minister Dario Franceschini said at the presentation of the finds.