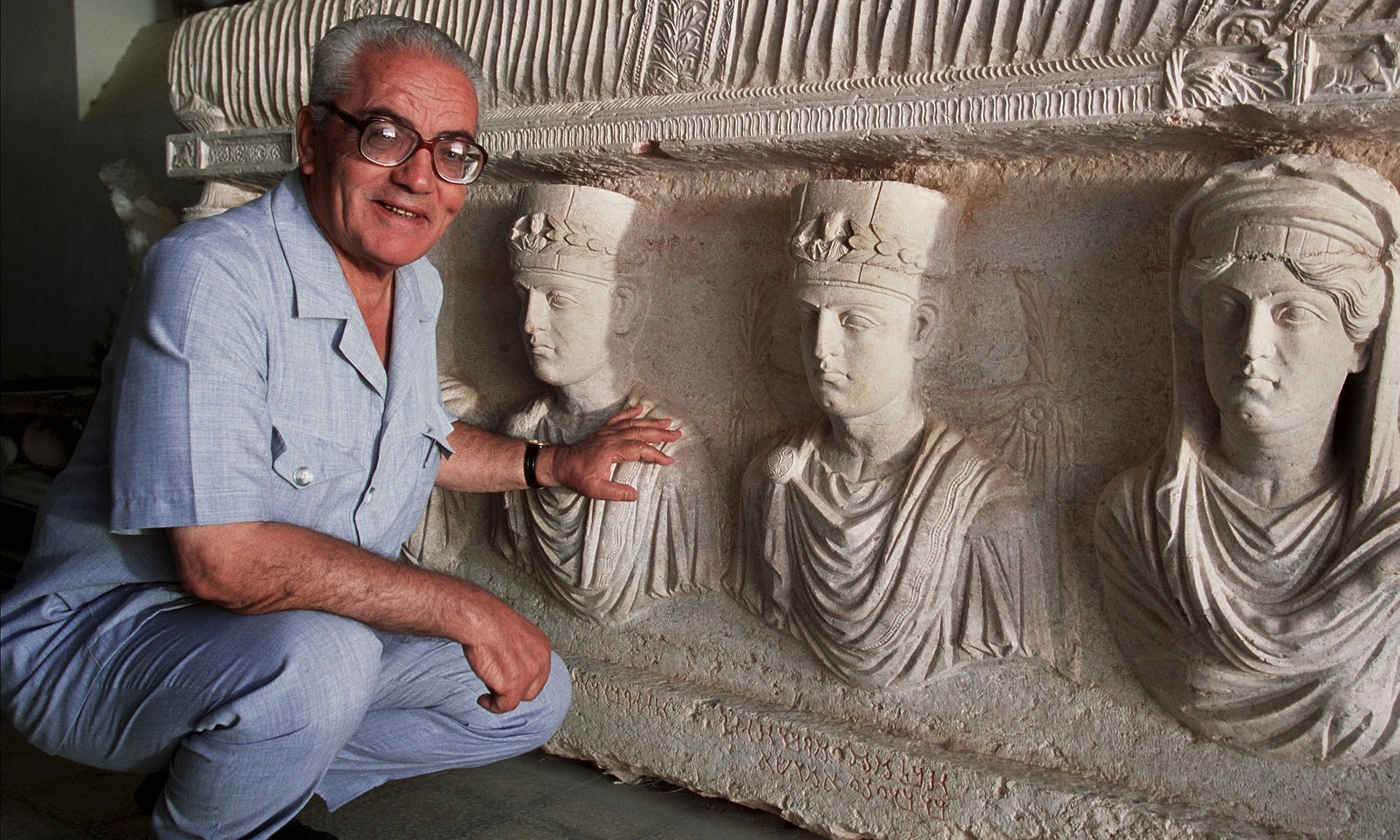 A 2002 picture of Khaled al-Asaad in front of a rare sarcophagus from Palmyra depicting two priests dating from the first century. Photograph: Marc Deville/Gamma-Rapho via Getty Images
News: Khaled Al-Asaad
Khaled Al-Asaad brutally murdered by Isis in Palmyra
At the site where he was working for more than 50 years
by Archaeology Newsroom - Thursday, 20 August 2015

82-year old archaeologist Khaled Al-Asaad was beheaded by Islamic State militants on Tuesday in front of dozens of people in a square outside Palmyra’s museum. His mutilated body was then taken to Palmyra’s archaeological site and hung from one of the Roman columns. Al-Asaad, a renowned antiquities scholar who has been working at the site for more than 50 years, was interrogated by the militants for a month before being murdered because he apparently refused to reveal the location of valuable artefacts.

“They killed him because he would not betray his deep commitment to Palmyra,” UNESCO Director-General Irina Bokova said. “Here is where he dedicated his life, revealing Palmyra’s precious history and interpreting it so that we could learn from this great city that was a crossroads of the ancient world. His work will live on far beyond the reach of these extremists. They murdered a great man, but they will never silence history.”

“Just imagine that such a scholar who gave such memorable services to the place and to history would be beheaded … and his corpse still hanging from one of the ancient columns in the centre of a square in Palmyra,” Syrian state antiquities chief Maamoun Abdulkarim said. “The continued presence of these criminals in this city is a curse and bad omen on [Palmyra] and every column and every archaeological piece in it.”

Amr al-Azm, a former Syrian antiquities official said Al-Asaad “was a fixture, you can’t write about Palmyra’s history or anything to do with Palmyrian work without mentioning Khaled Asaad.”

“He had a huge repository of knowledge on the site, and that’s going to be missed. He knew every nook and cranny. That kind of knowledge is irreplaceable, you can’t just buy a book and read it and then have that.

“There’s a certain personal dimension to that knowledge that comes from only having lived that and been so closely involved in it and that’s lost to us forever. We don’t have that any more.”

A terrible loss to the cultural community

UNESCO Director-General underlined in a statement issued yesterday that “The Syrian cultural heritage community suffered two immense blows within one week with the murder of archaeologist Khaled Al-Asaad in Palmyra and the killing of the Assistant Director of laboratories at the Directorate General of Antiquities and Museums Qasem Abdullah Yehiya.” “The untimely deaths of Mr. Asaad and Mr. Yehiya are a terrible loss to the cultural heritage community in Syria and globally,” the Director-General added.