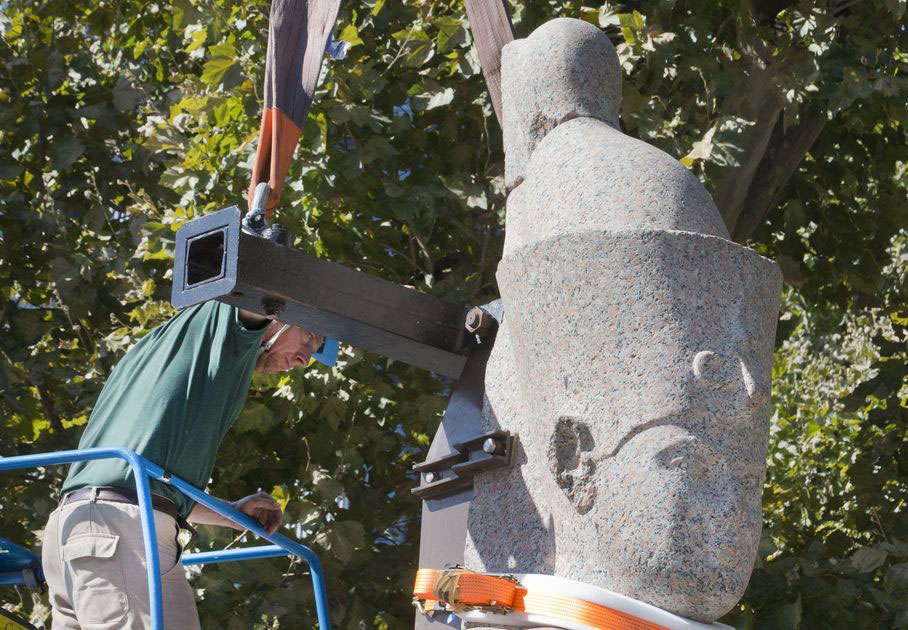 A worker sets up a statue of an unnamed king dating from the Ptolemy era, made of pink granite and measuring 5 meters and weighing 5.5 tons in Paris, Friday Aug 21, 2015. Photo Credit: AP Photo/Jacques Brinon.
News: Egypt Artefacts
Giant Egyptian statues on display in Paris
Preview of an exhibition on Osiris
by Archaeology Newsroom - Tuesday, 1 September 2015

Three giant Egyptian statues, part of an exhibition at the Arab World Institute in Paris, have been transported to France.

The three statues on display as a preview of the “Osiris: Egypt’s Sunken Mysteries” exhibition, opening on 8 September, had been submerged in the Mediterranean for more than a millennium. The giant granite statues of Osiris and Isis, along with a stele that sat at the front of a temple, were raised under the supervision of marine archaeologist Frank Goddio, who discovered Goddio with his team the underwater ruins of the ancient cities of Thonis-Heracleion in 2000 and Canopus in 1997. The cities remained the stuff of legend until Goddio and the European Institute of Underwater Archaeology (IEASM) uncovered them with support of the Egyptian Ministry for Antiquities and the Hilti Foundation.

The statues are both nearly 20 feet (6 meters) tall and weigh 4-5 tons each. The stele is also 20 feet tall and weighs nearly 16 tons. The Maritime Museum of Alexandria normally houses the three artefacts.

The exhibition will host over 250 artefacts never shown outside Egypt before. The artefacts displayed at the exhibition will be drawn largely from the last seven years of underwater excavations at the ancient cities of Thonis-Heracleion and Canopus off the coast of Egypt by the European Institute of Underwater Archaeology (IEASM), directed by Franck Goddio in cooperation with the Egyptian Ministry for Antiquities and supported by the Hilti Foundation. The selection will be supplemented by 40 artefacts from museums in Cairo and Alexandria.

The exhibition aims to illustrate the “legend of Osiris”, the Egyptian god of the afterlife, one of the great founding myths of ancient Egypt. Visitors will have the chance to watch rituals and celebrations of the temples of Thonis-Heracleion and Canopus, guided along 1,100 square meters.