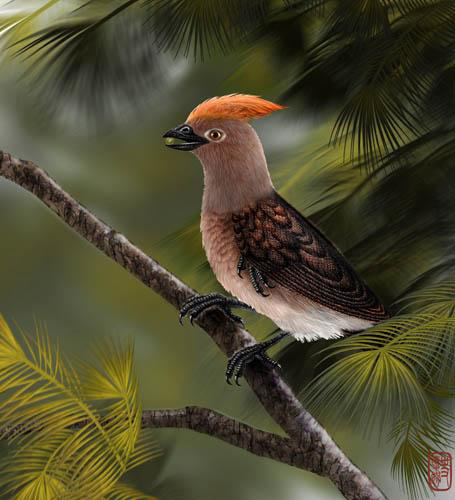 Over the past three decades, representatives of all major Mesozoic bird groups have been reported from the Early Cretaceous Jehol Biota of northeastern China. A new species, Chongmingia zhengi, reported in the journal of Scientific Reports on 25 January 2016, sheds light on the early evolution of birds. Phylogenetic analyses indicate that it is basal to the dominant Mesozoic avian clades Enantiornithes and Ornithuromorpha, and represents a new basal avialan lineage. This new discovery adds to our knowledge regarding the phylogenetic differentiation and morphological diversity in early avian evolution.

This new species, represented by a single new skeleton from the Early Cretaceous Jiufotang Formation of the Jehol Group in Dapingfang, Liaoning Province, China. The generic name is from the Mandarin word Chongming, referring to a Chinese mythological bird. The specific epithet is in honour of Mr. Zheng Xiaoting for his generous contribution in the establishment of the Shandong Tianyu Museum of Nature.

The new specimen is a partial skeleton with associated soft tissues and gastroliths, missing the skull and most of the caudal vertebrae. Comparative studies indicate that it is a large non-ornithothoracine bird distinguishable from the known basal avialans by a combination of features.

The furcula of Chongmingia is rigid (reducing its efficiency), consequently requiring more power for flight. However, the elongated forelimb and the large deltopectoral crest on the humerus might indicate that the power was available. The unique combination of features present in this species demonstrates that numerous evolutionary experimentations took place in the early evolution of powered flight.

Histological studies indicate Chongmingia had a moderately elevated growth rate relative to the long-tailed Archaeopteryx and Jeholornis. Furthermore, other morphological features, along with the evolutionary pattern drawn from other basal birds, reveal mosaic evolution and numerous evolutionary experiments relating to powered flight early in the evolution of birds.

The occurrence of gastroliths further confirms that herbivory was common among basal birds. The Jehol birds faced competition with pterosaurs, and occupied sympatric habitats with nonavian theropods, some of which consumed birds. Thus, avialan herbivory may have reduced ecological competition from carnivorous close relatives and other volant vertebrates early in their evolutionary history.

“Although our analysis suggests that the new specimen may represent the most phylogenetically basal Cretaceous bird known to date, this phylogenetic hypothesis should be treated with caution given the incomplete preservation of the skeleton and low phylogenetic support values”, said lead author Dr. Wang Min, Institute of Vertebrate Paleontology and Paleoanthropology (IVPP) of the Chinese Academy of Sciences.